If you asked me to play a single game of Standard for my life... I'd for sure play

But if you asked me what the most fun deck to play in Standard is - while still remaining very competitive - I'd shift the red for white and talk to you about Azorius Control; more specifically Azorius Flash.

Here's a list I've been playing maybe second-most in the weeks following the release of Crimson Vow:

In the broadest strokes, Azorius Control is as good or better than the Izzet decks in the majority of matchups. I actually like Azorius more than any of the three or hybridized Izzet decks against either of the major beatdown decks, Mono-Green or Mono-White. What can I say? Doomskar is just a more reliable (and often cheaper) way to sweep the board than Burn Down the House in Izzet Epiphany or Cinderclasm in Izzet Dragons.

Moreover, Azorius just has this amazing game plan come the middle turns. What attracted me to it first and fastest was the similarity between Cemetery Protector and Nightpack Ambusher. In many ways, Cemetery Protector is single-handedly the inheritor of the Simic Flash strategy that served me so well back at the end of 2019. It can win in combat, eating an often small White attacker Simian Grunts style... And in this deck in particular, with so many instants, a constant stream of fuel for 1/1 creatures is essentially ever-present so long as you can untap.

I've talked before about instant - specifically cantrip - selection for Cemetery Protector, and this particular deck does a great job of that. Everything from Consider to Revitalize to dedicated card drawing like Behold the Multiverse and Memory Deluge triggers Cemetery Protector while drawing you into more cards; and hopefully more instants. The bias toward Behold the Multiverse over the more powerful Memory Deluge is a good example. There is a mild synergy with sister spells Doomskar and Saw it Coming of course - a rare opportunity to bluff or legitimately misdirect opponents online - but more importantly, the ability to cast the spell for effectively two mana (after a down payment) helps build value into turns where you start out with six or nine lands... Essentially two-spelling big-like the turn you cast one of your Flash closers.

Tactically, Azorius asks you to play in a mindful, thoughtful, strategic way. You kind of need to get at least one instant in your own graveyard early (so you have something to gobble up with Cemetery Protector), but you also want to save cards like Consider especially so that you have cheap ways to trigger the Protector (or later, Hullbreaker Horror) when you have exactly five or eight mana.

It took me a minute to get my head wrapped around four copies of Fateful Absence. Traditionally, Control decks trade speed for the opportunity to build advantages, whereas Fateful Absence is a card with a little speed that gives up card advantage almost by definition. But in this deck that turns out not to matter very much. All you have to do is live, and you are inevitable against almost every other kind of deck in the metagame. Your Flash threats - especially the big Blue one - can take over to the point that one extra card is meaningless. And you might be surprised at the number of times you can directly erase a Clue while the opponent doesn't have open mana to crack it, anyway.

Outside of the two most popular aggro decks,

is essentially the best deck you can possibly play against Black-based board control, whether Mono-Black or

Blood Money. Jwari Disruption // Jwari Ruins is often surprisingly backbreaking against a Black deck's outlier Deadly Dispute draws, and Saw it Coming at any point in the game will be exactly what you want to have against Blood on the Snow.

deck's planned end game of hitting land drops, and then playing Hullbreaker Horror with at least one instant in hand. When I first tried this deck, I missed Devastating Mastery (main). As someone who was previously on the Black side more often than not, I respected Devastating Mastery's ability to act as a Doomskar that simultaneously trumped Planeswalkers... and even Treasure tokens. But the Kraken Horror does everything a Devastating Mastery ever wanted, while also keeping Blood on the Snow itself at bay.

Black decks tend to hate first turn Mountain, because it usually implies a third turn Expressive Iteration... But non-Snow-Covered Plains is an even steeper climb. First, the ability to answer a Planeswalker directly with Fateful Absence is both pretty great and very consistent; really, who cares about one Clue card when you're talking about Lolth or Professor Onyx, both of whom are going to draw far more than one extra card if left unchecked? But unlike many Mountain-into-Island decks, this Plains-into-Island presents a hard counter in Saw it Coming. Not a delaying measure. Not a tempo play to keep a Goldspan Dragon alive for one more turn. Not a bounce spell. A hard counter.

Of course, this leaves Izzet itself.

Again, if I were on the Azorius side, I would feel very advantaged against both Mono-White and Mono-Green. I think Azorius is the best deck against Mono-White that you can reasonably play right now. You can get taxed to all hell, and they can run you over wide-like on the play, but if you Fateful Absence whichever Legendary 3-drop they have, and you play Doomskar on time... You're in as good of shape as a deck can be against that brutal beatdown deck.

The current version with no Devastating Mastery main is probably worse against Mono-Green than it could be if you were just trying to beat Snow-covered Forests... But it's far better than Izzet. In my experience Mono-Green is hugely favored against Izzet Epiphany and very solid against Izzet Dragons. By contrast I think Azorius is ahead, if not automatic when facing Werewolf Pack Leader and Blizzard Brawl. So even if you don't "always" win, you're in better shape than the other reasonable deck to be playing (i.e. Izzet).

In the previous format one plan of attack for the top of a Mythic ladder defined by Izzet decks was to play a heavy Counterspell Azorius deck, and basically counter everything. Or try to. That worked well... Only because the Izzet players themselves let it work. I can tell you that from an informed Izzet side, mono-permission isn't an effective long-term plan. Izzet wins that matchup on mana advantage. Slow playing from the Izzet side, playing to maximize advantages that can be built by Galvanic Iteration and Unexpected Windfall put even a very prepared Azorius into a position where it doesn't have enough land to cast all the counters it needs over both halves of a turn cycle.

Moreover, Izzet could spend mana on its own turn (for cards like Expressive Iteration) with almost no fear of retaliation. What are they going to do? Cast Mordenkainen? Come on! Because of this Izzet would be less likely to miss land drops. By contrast, any "cycling" Azorius tried to do with Sunset Revelry, or stashing cards in exile two mana at a time, could at least potentially, put it in a bad way. On the wrong turn, Izzet could just jam multiple must-counters on end step; then untap for the big combo pieces. Something would get through.

Fundamentally, this has not actually changed with Crimson Vow.

Azorius, has, however, gained expectation. Many of the games it was winning before, essentially due to Izzet cooperation, are still available. While it has fewer direct permission spells now, Azorius probably has to keep control of the game for a shorter period of time than before; Cemetery Protector and friends can simply win faster than Lier or any Planeswalker, meaning Azorius has to hold back with seven cards in hand for fewer total turns. In addition,

also gains a whole new script to read from.

can force action at instant speed, both with Cemetery Protector or Hullbreaker Horror. If the opponent goes full clown car, slams his giant shoe on the gas pedal of a very small vehicle come turn nine... Hullbreaker Horror and Consider can steal the game right then and there. But you don't need to win the lottery with

. You can just seize the initiative in a small or medium way and suddenly Izzet has to figure out how to kill you before you kill them, rather than vice versa.

Relatively few Izzet decks are playing hard counters right now, but Divide By Zero and even Fading Hope are effective against four or seven mana creatures, so just resolving one the first time doesn't guarantee victory for

. But spending its instants to "defend the queen" rather than answer Izzet's threats is more mana manageable; and again, something Azorius has to keep live for a shorter period of time than prior to Crimson Vow.

This is definitely... something. And something

Right now? If I had to pick a side? Izzet - both of the major branches in my experience - have the advantage over Azorius. But Azorius has game, even against a good

player now. Add that to good-to-fantastic matchups with Green, White, and Black... And you have a legitimately viable Number Two possibility for the metagame; and one that is very fun to play, to boot.

I've started to play a lot more paper Constructed in recent weeks; and I thought I'd give an update on one of the ideas I recently talked about. Remember these guys? 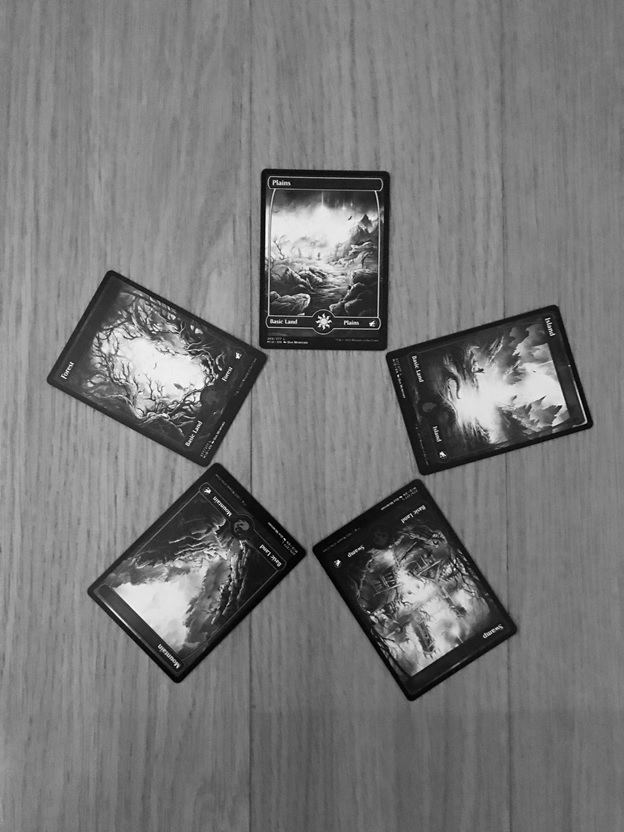 One idea that has been knocked around the community - for reasons creative as well as cutthroat - is playing Innistrad: Midnight Hunt or Crimson Vow basic lands. If you've been thinking about investing in these to try to get an edge in paper... At this point I think save your resources and save yourself a little mental anguish.

I recently stocked a

Madness deck with Midnight Hunt Forests and Islands, and managing the lands myself was not worth the effort. I probably didn't do myself any favors... I picked the most looks-like-each-other art for the basics, and it was annoying to do my own bookkeeping.

My deck needed to have specifically Island for Daze, and while not specifically Forest for operating mana... It really wants Forest for pain-free Survival of the Fittest operations. You kind of want to know how many times you can tap for

without taking any damage; to the point that it is sometimes better to Survival for an Aquamoeba that doesn't cost you any life to cast with basic Islands than to draw a card with Arrogant Wurm at instant speed if it means paying two life into Yavimaya Coasts for the turn.

Could I master my own art choices? Yeah, probably. But Madness is both strategically demanding and probably the most skill-intensive strategy to play on a turn-by-turn basis due to being a Survival of the Fittest deck and often the beatdown. It just seems to me that the time invested in that deck can be put to more rewarding skills than basic land identification.

If I had truly limitless time and patience, I might come to a different conclusion. But I don't; and I trust, neither do you. The basics sure are pretty, though! So, I kept Midnight Hunt Forests. Just not both. Hopefully my recent headaches will save you a little time.