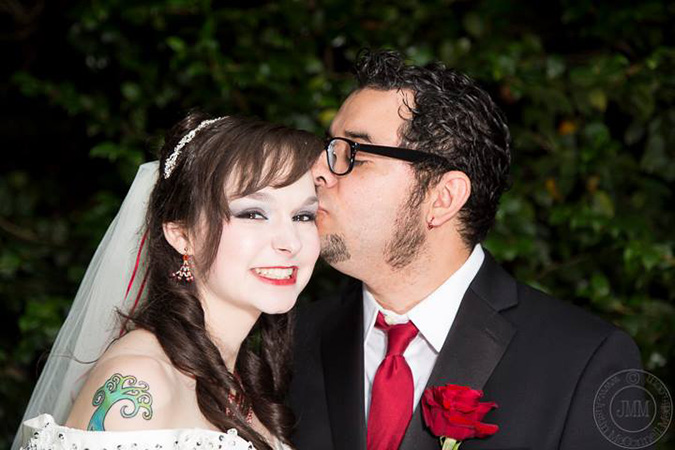 Mike started playing Magic with Limited Edition Alpha packs in the summer of 1994. Like most players of his age, he jumped in and out of the game throughout his life. When you start working for a company that makes games, you tend to have to play the game that company makes. Wizards of the Coast was no exception. You live and breathe D&D and MTG while you work at Wizards. Depending on exactly what department you work for at Wizards, you probably play one game more than the other. Luckily for Mike, Magic was a game he always loved playing, even though he couldnât always keep up with it. Being the community manager for Magic, Mike needed to play a lot of itâat work, outside of work, at conventions with fans and friends, anywhere he could. He would need to find someone with the same level of passion for the game as he had.

Tifa had always been a very serious gamerâbe it video games, board games, card games, or the like. Growing up in a very rural area outside of a very small town far away from any big cities, Tifa hadnât heard of Magic: The Gathering until college. When she first saw the game, she wasnât very interested because she already had a number of hobbies that took up a lot of time and energy. However, when she started working in a board game store to make some money one summer, the Magic community was very appealing to her. They were friendly and passionate about the game they played, and it looked very fun. Once her boss realized that she tried to sell Magic to most customers and talked more about Friday Night Magic than anything else happening at work, he sat her down and taught her to play. She was hooked immediately, and it wasnât very long before she was a regular at FNM and tried her hand at Pro Tour Qualifiers and a Grand Prix. As college graduation grew near and Tifa was offered a potential position at Microsoft that could lead to writing for games, she considered her other options. Was she qualified to work at Wizards? A good friend recommended her, and within two weeks, she was working in Game Support, excited to find the right department for her career! Once she was there, she also started the Lady Planeswalkers Society, a welcoming, friendly environment designed for women to learn and play Magic. This became her most beloved, time-consuming hobby, and she couldnât imagine dating anybody who couldnât help support the group.

As you can see, Magic has been a huge factor in both of our lives. We both decided to commit our careers to the game and continued to play in our personal lives outside of work. Because of Magic, we met. We didnât sit very far from each other and always found reasons to chat. We occasionally invited each other to things and ended up learning about another shared pastime at the PAX Magic party, where we swing-danced for the first time. Eventually, after months of flirting and two ended relationships, it was obvious that we were made for each other. Tifa had just landed a brand manager position for Magic when we started dating, and things became very serious very fast. Once Mike proposed and wedding-planning began, we both knew we wanted Magic heavily involved in the wedding. 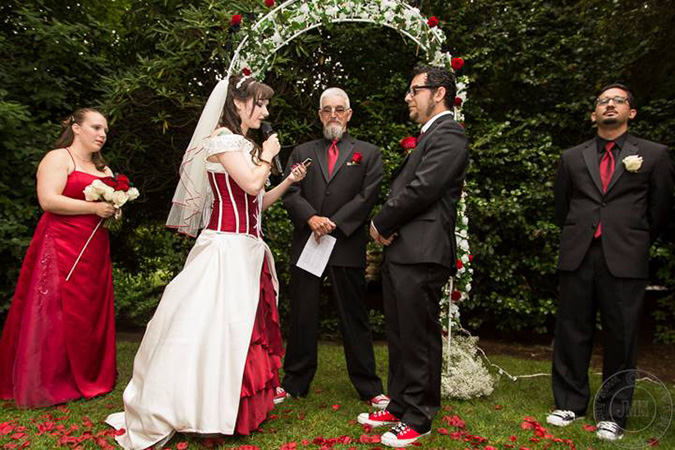 Whatâs the most exciting part of being a Magic player? Busting open a booster! We decided to have our wedding vows inside of booster packs. Since we started dating during Dark Ascensionâand it remains Tifaâs favorite set to this dayâwe used wrappers from that set. The vows were on blank Magic cards, and actually, both included references to the game. Tifa claimed there was âno soul in the multiverse Iâd rather have by my side.â Mike said, âToday, you and I join forces to create a marriage of Mythic rarity.â Tifa called Mike her winning card and her first pick. Mike promised to always draft Magic with Tifa as long as we can. We both made references to forever being Two-Headed Giant partners. Our ceremony also mentioned the multiverse.

In our programs, we created deliberately-overpowered card versions of ourselves. Our love is OP, so it just seemed like the right thing to do. While Tifaâs favorite thing to play is Simic and she has strong feelings about evolution, having studied biological anthropology for two years, her personality is mostly red and fiery. She used these three colors to come up with a card that captured her personality and love for Magic. Mikeâs favorite colors to play are black and red, and these also fit his passionate personality. He used battle cry because he feels this is his role as a community manager, and the rest of the abilities capture his role in the relationship. The last card uses our wedding colors and displays what we want for our future: a loving home and the ability to protect our loved ones.

We wanted to use Magic cards for our guests in a convenient, yet unique way. We decided to name the tables based on planes within the multiverse and also guilds from Ravnica. In addition, the place cards were on blank Magic cards, and each guest had a blank Magic card that included his or her name, table, and food he or she ordered. This was a neat favor guests could take home, but these cards also had a very practical use. We had a blast deciding what groups of friends and relatives should be at which tables. 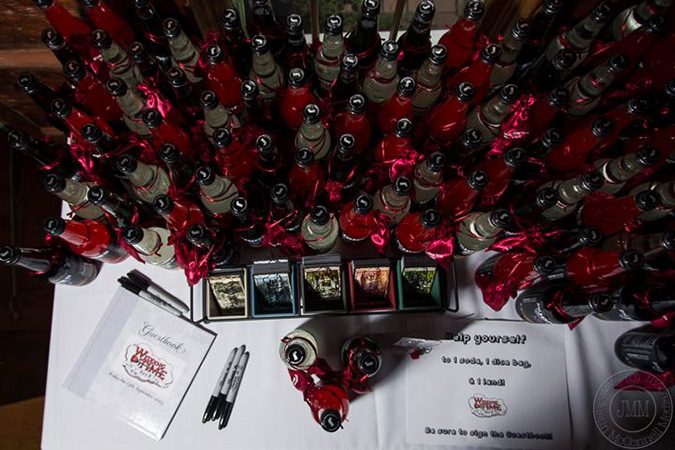 We also wanted our favors to be awesome for people who played Magic, but still cool for our relatives and friends who arenât Planeswalkers. Everybody received a Jones soda with a dice bag wrapped around the bottle that included dice. We stamped roughly a thousand full-art Zendikar lands with our wedding logo (designed by Inkwell Looter) so that everyone could take one home and the Magic players could use them in the Drafts. Oh yeah, thatâs rightâwe had Drafts at our reception. In addition to a dance floor, an amazing flipbook photo booth, a six-foot-tall Jenga tower, and many board games to pick up and play, we had our judge friend Allison Medwin be our official wedding tournament organizer and organize Drafts throughout the night. In fact, people were playing Magic so far into the night that the brideâs parents had to kick them out when our venue time expired.

Neither of us works for Wizards of the Coast anymore, but Magic is still just as big a factor in our lives as it was then. Itâs transformed from something we worked on in our careers to our main hobby outside of work. This is especially true because the Lady Planeswalkers Society has two chapters we organize in the Seattle area, meaning we have six events a month to attend in addition to our occasional Winston Drafts and Magic parties. Also, we are hitting the convention scene hard this year with booths, learn-to-play areas, and panels about the group. Magic will continue to be part of our relationship and home for many years to come. 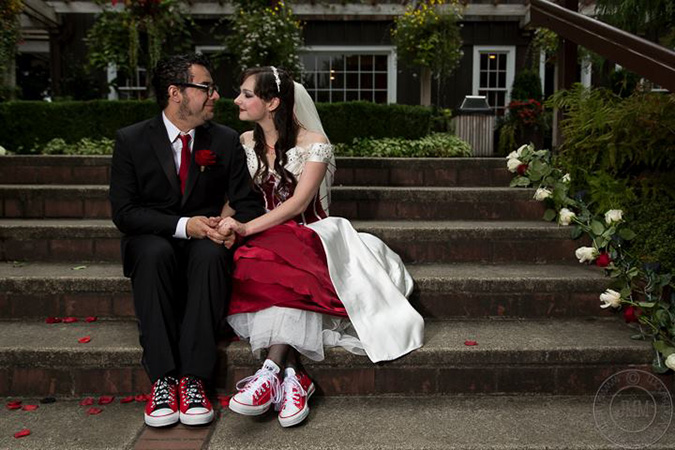