I was going through some old Magic boxes last weekend and realized that I hadnât looked through my old The Duelist magazines. In case you werenât around in the 1990s, The Duelist was the source for Magic news. It was the extension of mothership online articles before, well, the Internet was relevant. They even had Usenet forums on Magic, which were like forums, in text. This is all before color was invented.

I found some old maps in there, and I thought back to pre-Internet traveling, when youâd receive from a travel agent a specified map to your journey. TripTik, they were called, and I recall my father having one in 1993 when we traveled out to see family in Portland and up back through Seattle. Itâs an obsolete piece of information due to Google maps and a foreshadowed point to Magic: The Gathering.

I love seeing maps in Magic. There is a mystique about being able to steal a free glimpse into a flavorfully-populated plane, trying to understand relationships by borders. Medieval empires had no concept of needing to know everything in the known world by empire, as they often changed rapidly, and frankly, no one had access to all the information.

Magic is in an odd place for information-sharing. With the Internet and social media making any tidbit incredibly relevant during spoiler season, maps arenât really needed much anymore. When a map-like purpose exists, a rough hand-wave is all that is needed. For example, the card Gridlock could refer to an exact location but doesnât need to zoom out of the frame as to reveal an encompassing view. At card size, showing architecture is enough, compared to a city block or sector of an entire city. Likewise, Uncovered Clues showed the penultimate conclusion to the Return to Ravnica block, the implicit maze, a race through all of the Ravnican guildgates. Showing a model with a path is all thatâs needed compared to massive map over a few cards to advance a storyline without a novel.

This wasnât always so. Magic had a master map of the main plane Dominariaâsomehow, the folks at Phyrexia.com, an old-school Vorthos hangout, came up with this map. They also made or found a globe artwork illustrating the same. I have no idea how they came up with these maps or who made them, but they exist online right now.

A secondary site, the âmainâ Magic encyclopedia on the Internet is the MTG Salvation wiki, which also has a map section.

Frankly, Iâm not sure how either site came up with the full Dominaria maps. I donât recall them ever being printed or officialâor even an announcement if they were a spoiler or leak. I mean, Phyrexia.com is an old site. This was Vorthos before Vorthos had a name.

If Pete sent this, was it in a style guide? Is it even real? 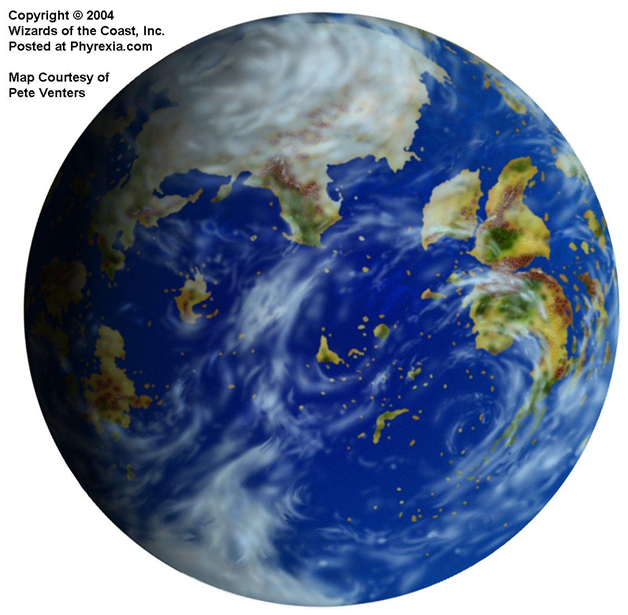 More of the larger maps are iterations from the Coalition time period, near the end of the Weatherlight Saga. Notice how far away Shiv is compared to the other islandsâthose dragons had to fly wicked-far.

This continent was the location for the Brothers War, Antiquities, and Ice Age, and it was the location for much of the early expansion sets of Magic. The best way to really taste this flavor is to pick up copies of two massive books: Artifacts Cycle I and II. Each book is an omnibus of the first few books, discussing Urza and Mishra. They are great books to read, despite some of the other, shakier other Magic novels. Rest assured theyâre great. 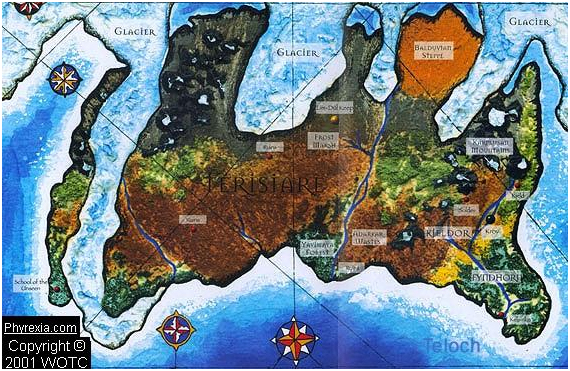 Via The Duelist #5 and Phyrexia.com, Illustration by Amy Weber 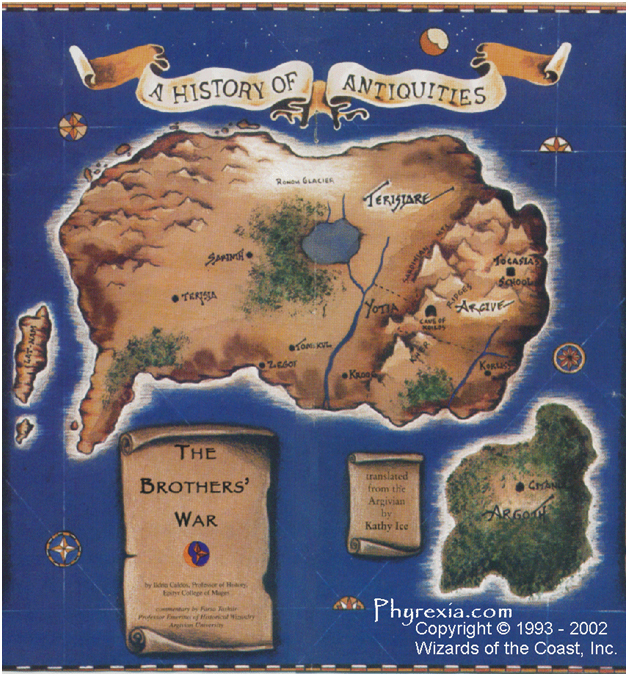 Notice the time change below and the great amount of ruins. 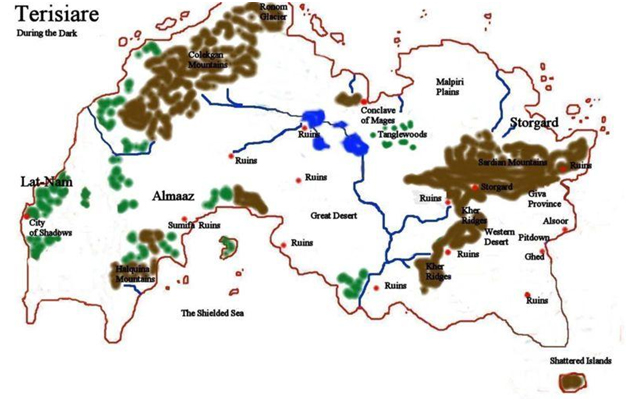 This area of Dominaria is the location of the Planeswalker War and the early comic series Shadow Mage. Theyâre cheap comics, $1 to $3 apiece, and theyâre worth a read for the art alone! Itâs a pre-revisionist story, so it starts and ends as abruptly, but if we ever had a background glimpse with a lot of Planeswalkers being involved at the same time, in one place, it would be here. Old school Vorthoses discuss this island a lot and how open-ended it felt, not unlike the current status of Ashiok. 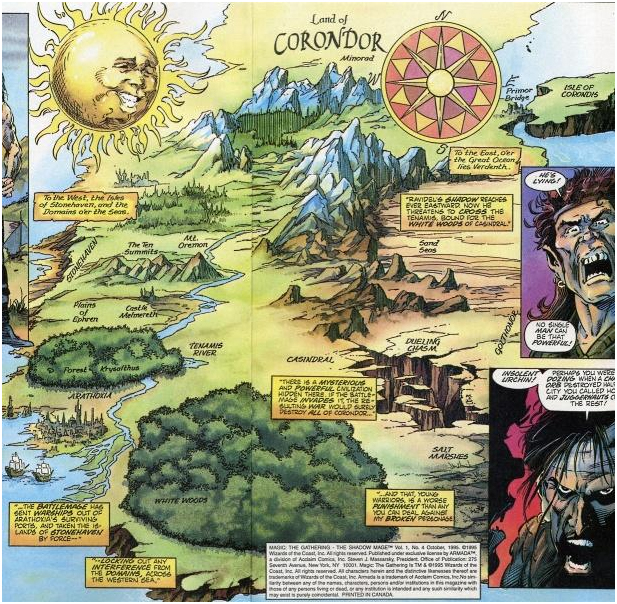 The entire Mirage set, and the beginnings of the Time Spiral block, all began in Jamuraa. This map was the one that was available for purchase as a poster in the mid-1990s. Sadly, they are all long since sold out of them. If you have one, please scan it for the masses! 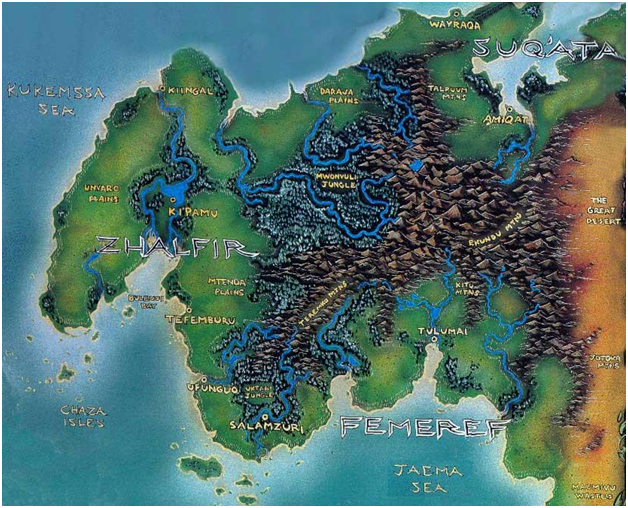 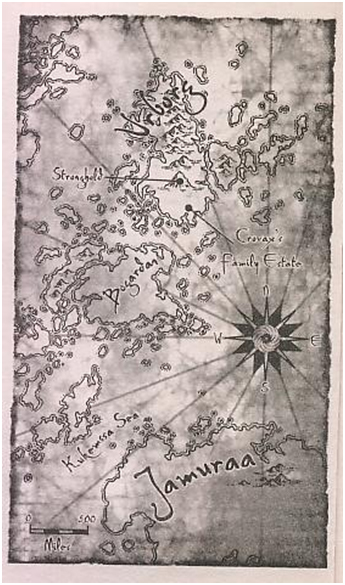 Notice how close the Kukemssa Sea and Bogardan are to Jamauraa. Distance is all relative, but it doesnât take a Planeswalker to visit dragons. Then again, if we borrow from real-world medieval life, most people lived and died with thirty to forty miles of where they were born. Traveling farther than that, you ran out of food, didnât know the language or customs, and frankly, via war, you probably became a slave or were killed. Talking to Germans today, when I visit, itâs unfathomable to drive twenty-four hours to Florida for a Gophers football bowl game. To them, itâd be like driving from Munich to Moscow or Ankara, Turkey, a ridiculous distance.

This is where the Rathi Overlay happened, basically overlapping the Phyrexian plane with Dominaria on the Urborg island. Then, it got blowed up.

This is where Durkwood, Hurloon, Keld, and Llanowar are located. Core sets live here. 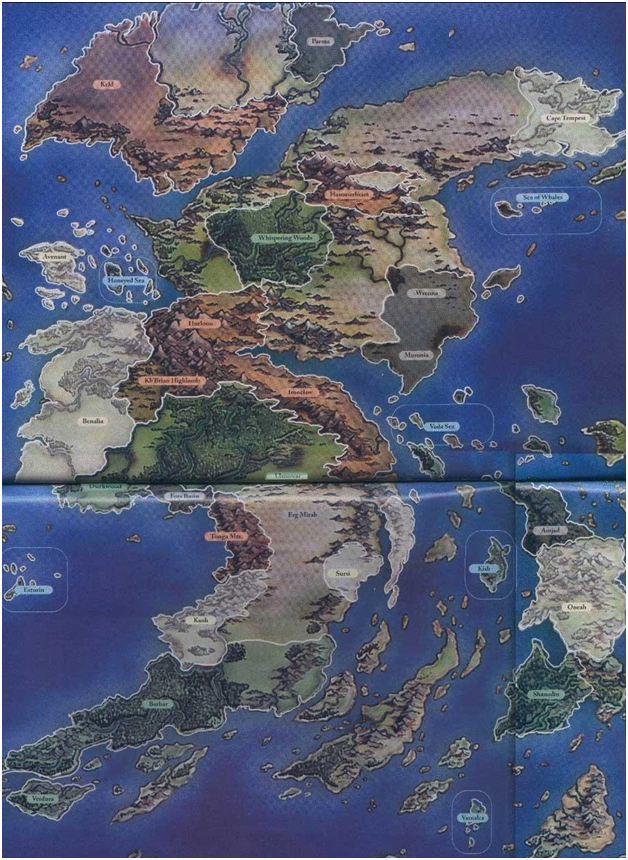 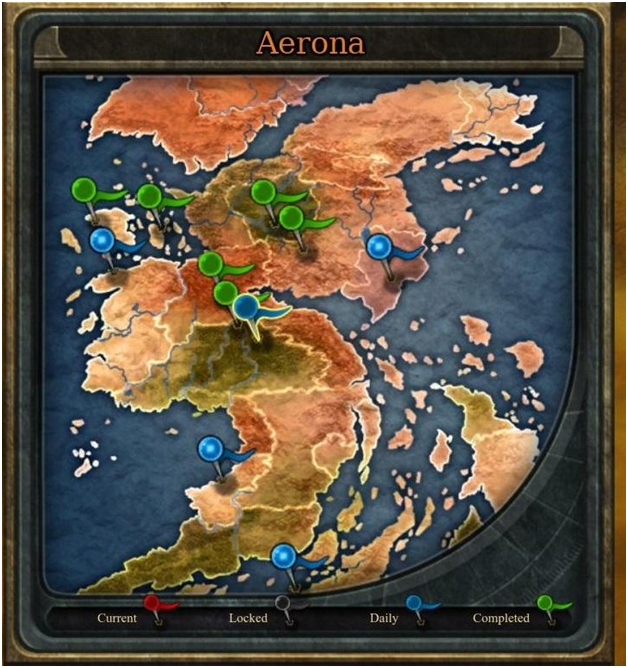 The bottom map is super-hard to read, but lucky for us, thereâs a black and white version that was also in a book! 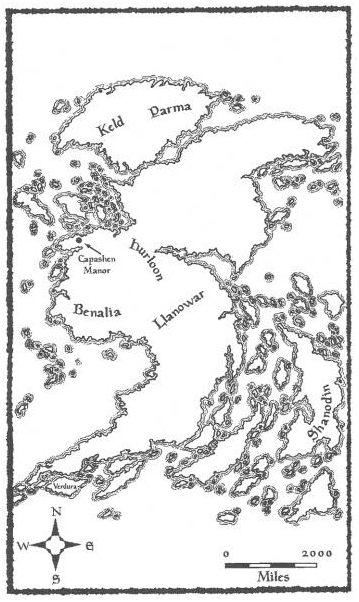 This tiny, tiny island takes place over two blocks of Magic. There are six sets comprising one island, on one plane, Dominaria. This is like us hanging out in Mardu landâ.â.â.âfor six sets. It must be larger than a mere island because Krosan beasts are enormous! 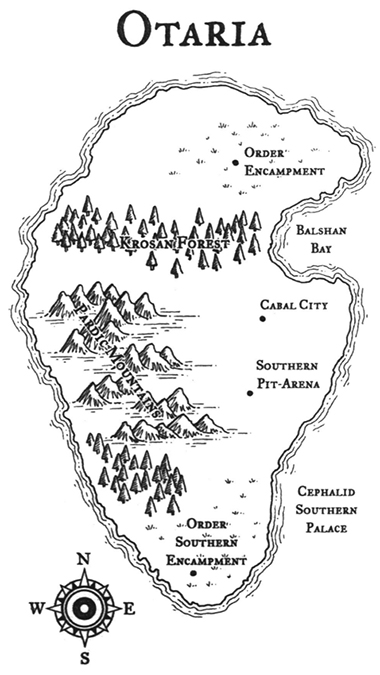 This area of Dominaria is where Nicol Bolas ruled long ago. 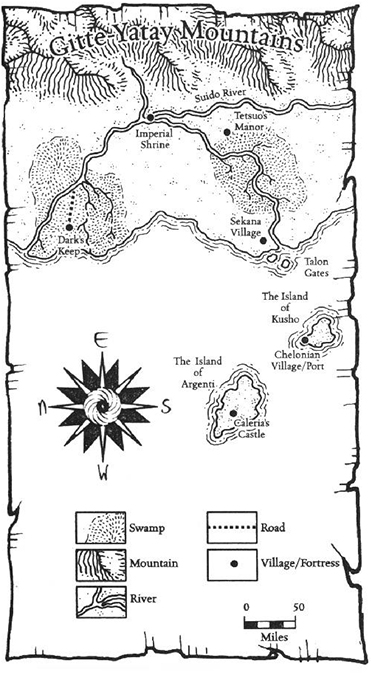 This area of Dominaria was covered in three of the Magic novels. A few things happened. 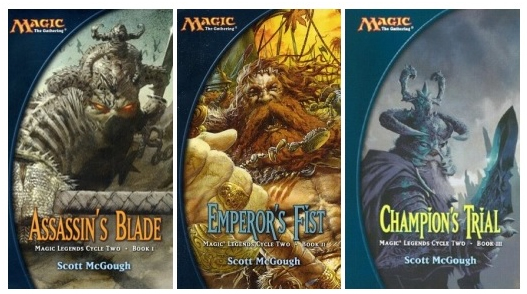 This tiny little map is in the novel of the same name. 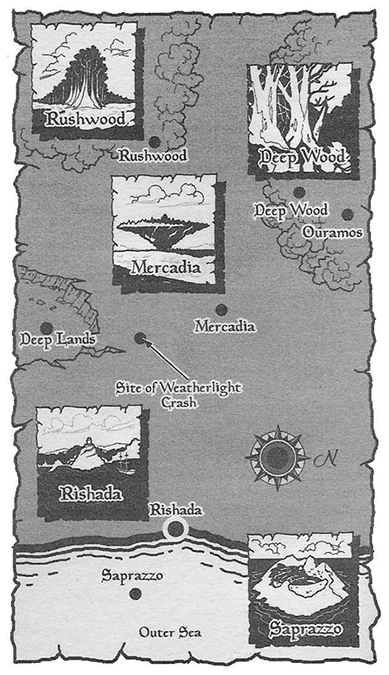 Without a map, the port city of Rishada is just a powerful card. Showing a crash site gives perspective how far the Weatherlight crew had to traverseâfarther than my longest Boy Scout hike, thatâs for sure.

By having a map, Mercadia City and the strangeness of its formation makes sense. By gazing into some concept art, we can see on a map, the overall formation, below and above.

This plane is not Dominariaâitâs a tiny plane that takes place for the entire novel of The Cursed Land. 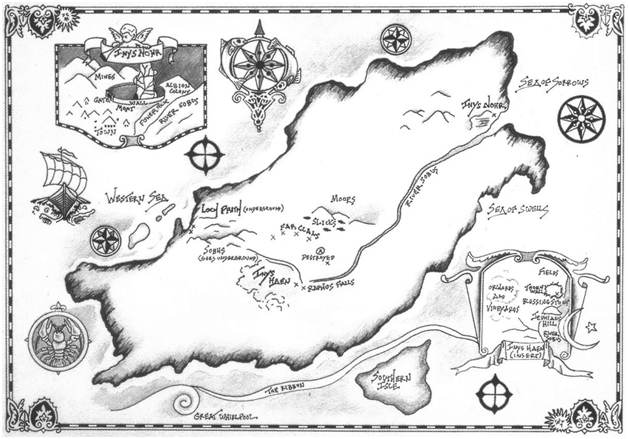 This is one of the few maps that has very few cards intertwined into it because itâs not on the home plane, because it has no set dedicated to it, and because the book was written after the fact. It does pose the question.

This plane is also a standaloneâthat is, not on Dominaria. Notice the south is at the top of the map. 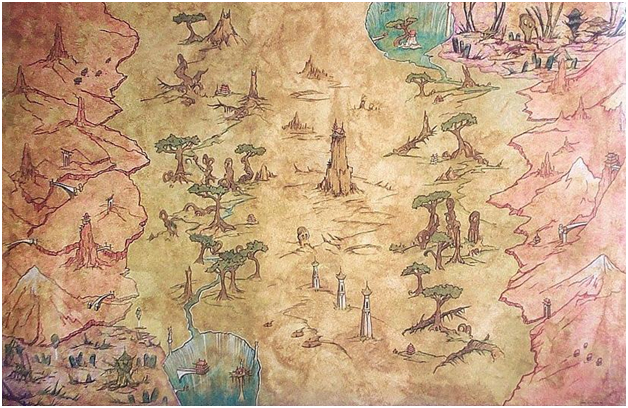 Notice that these maps above are a sampling. Sadly, this is the most of them. There really arenât many made because unlike Dungeons & Dragons, Planeswalkers donât investigate the town tavern. They have epic Dragon Ball battles, theyâre not searching for secret doors off an amazing Mike Schleyâpainted dungeon map. By showing the minutiae, it limits the ability to speak of a plane and forces storyline elements to fit. Think of Ravnica needing to be limited in size or scale. Each guild can visit each other, so is Ravnica the size of New York with its boroughs? Or is it massive in scale like central Europe? Or is it larger? Until maps are needed to illuminate, keeping them separate is a good creative choice in modern Magic.

The main point I need to reiterate is that much of Magic was on one plane, with each block of card sets being on a different island. Iâm not sure who grabbed the top maps, but the shoe fits. This also explains why Planeswalkers are now mortal. You couldnât have a one-in-a-million person be a Planeswalker on that plane of Dominaria. There just arenât enough people unless sparks wore off or wore out, and thatâs a harder thing to brand.

Until maps return to us in a future set, gracing play mats and framed on walls, the community of Magic will always fill gaps. See some of them below, and even see Tarkir taking shape in the community. 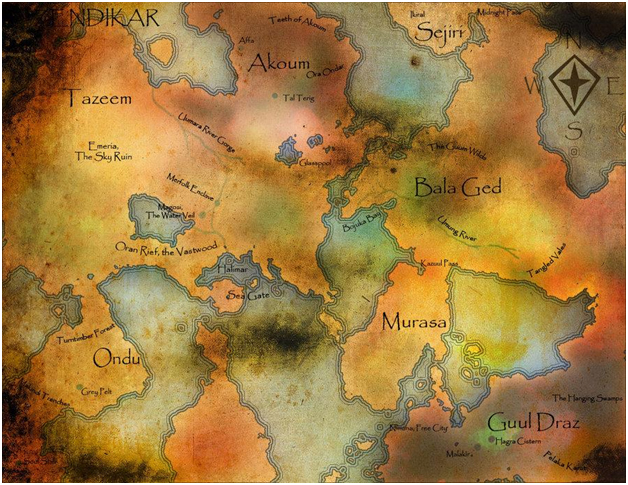 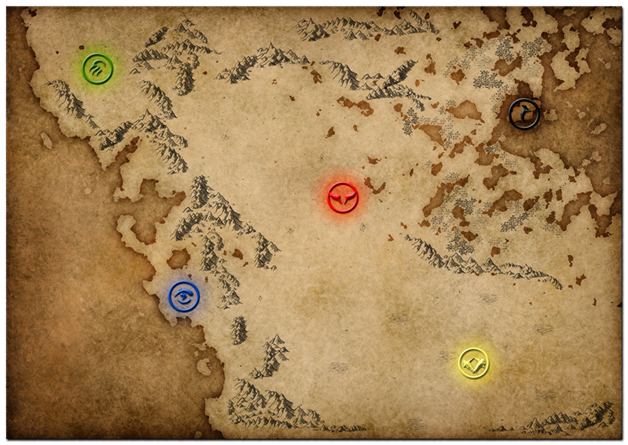 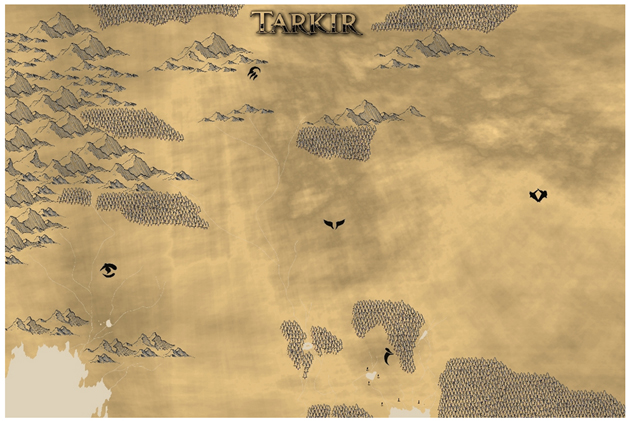 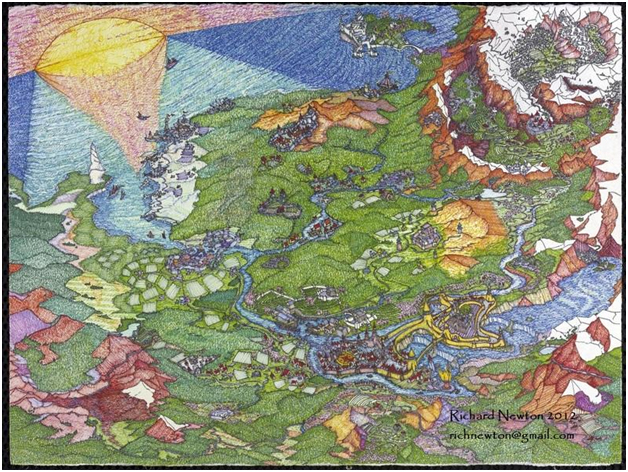 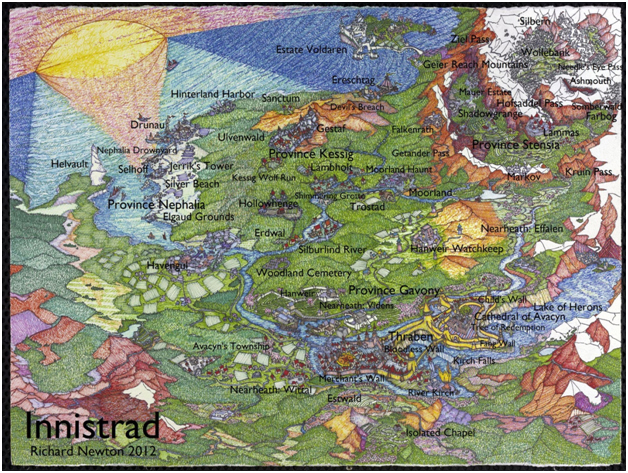 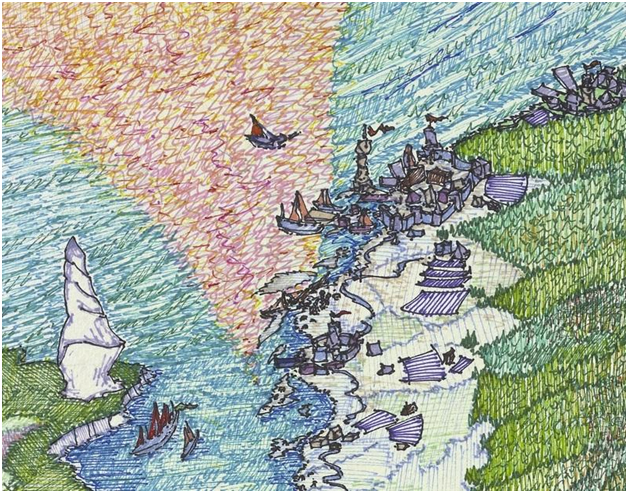 P.S. Snack Time with Mike and Ant is ramping up; you should check out an episode.

P.P.S. Nominate a community member for the Top 8!