I love community things. Itâs that white-mana influence that gets me going when I see something new and big on Twitter. Iâm all about podcasts giving away tokens, eliciting joy in their fan bases. I find the Alpha Original Art project to bring me a short-fueled euphoria in seeing the original art that shaped the game we find so much happiness interacting with. We hosted the first year of the Community Top 8, seeing a few folks, among our many, who should be recognized. This is my jam, and while even more of these things happen behind the scenesâsuch as finding a âgrail original artâ for a collectorâtoday, we add to that list.

Today, We Begin the Alpha Playtest Card Project. And We Need Your Help!

To explain what the project is, you need some background on whatâs an Alpha playtest card and why it necessitates a project. Also, why the hell does this matter?

To do that, we need to hear from Keith Adams. If you donât know who Keith is yet, youâre in for a treat. He is the Magic community misprint guy, and he has been for years.

Letâs meet him, his weird collecting niche, and the project. 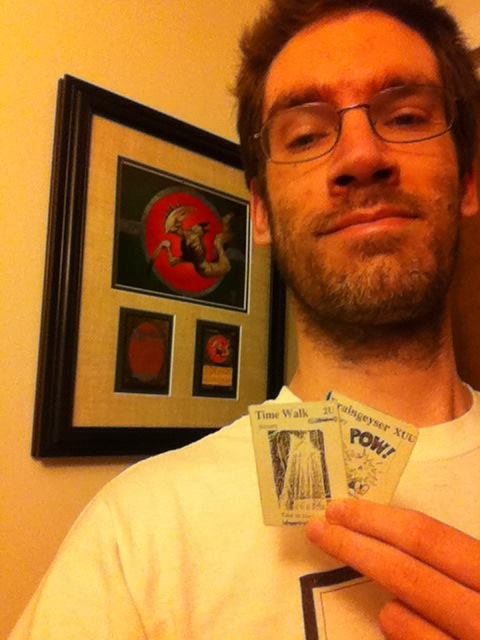 (Mike) Letâs dive into Keith Adams and his beginning into misprint cards.

(Keith) Long story short: One of the other guys who had "everything" [in our local shop] got a job at NASA and had little time to play anymore. He sold his collection to me. It had four of every black-bordered card and a moderate number of misprints. I had so many cards I didnât know what to do with them. But I was sure of one thing: The misprints in his collection were pretty cool, and I was not going to get rid of them. Heck, why not get a few more? That seemed like a good idea. Yeah, I think I'd do that.

This was probably 2001. The number of misprint collectors was rather small. The attitude by most players was, "Why are you collecting these cards? They're defective." I honestly didn't care. I continued to collect them simply because, the more I looked around, the more I found, and it simply progressed from there. There was no checklistâyou had to dig. I found many things seemingly no one knew existed.

The Alpha playtest cardsâ.â.â.âWhat are they?

One of the things I found was a full deck of Alpha playtest cardsâcards that predate all Magic cardsâ.â.â.âWhat? But it made sense: At some point, they had to test out the game and get the cards right. They were on eBay for a very, very low starting bid. I would bidâ.â.â.âand I was the only bidder. Excited by what I had, this became the one thing, of all the crazy stuff out there, that has fascinated me the mostâ.â.â.âMagicâbefore there was Magic.

Theyâre smaller than a typical playing cardâabout half the sizeâand most have some clip art on them. 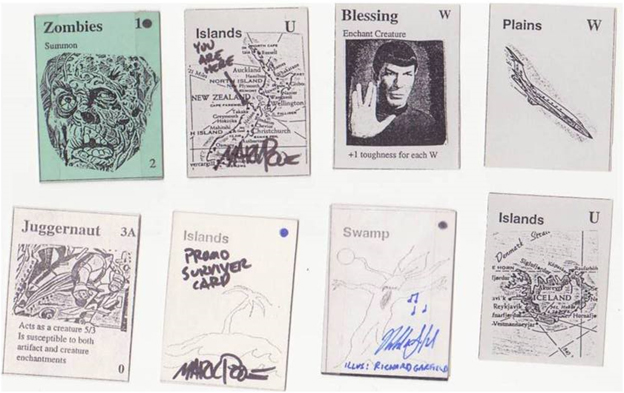 Our own Richard Castle with Inside the Deck interviewed Keith, and you can see just how much smaller the playtest cards are compared to actual Magic cards.

As for the clip art on them?

Much comes from Calvin & Hobbes, Tintin, or Dungeons & Dragons books. Since they're rare enough that most collectors are not fortunate enough to have many, if any, I have taken it upon myself to do as much research as I can to discover the art locations. I spent a whole week reading every Calvin & Hobbes comic strip and matching up every comic cell I could. 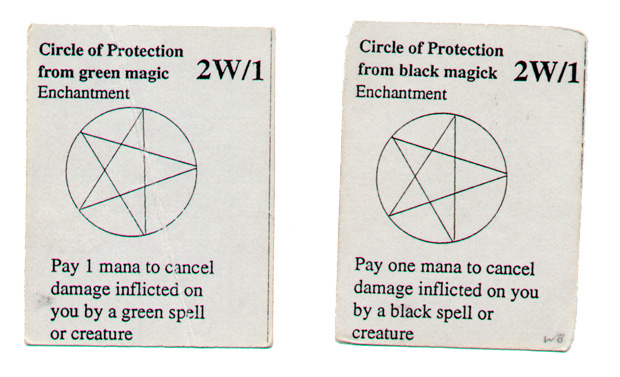 Most playtest cards, including the current form of Magic ones, are just mechanics on a psuedo-card-frame template, with some sort of confidential or NDA on them, and thatâs about it. From my past experience playtesting a few LCGs, including Star Wars, playtest cards are just printouts on normal paper in sleeves with real cardboard cards behind them. Some gaming companies have stickers, but theyâre far from normal in the field.

In the last fifteen years, I have accumulated a few hundred Alpha playtest cards. I even found [some] uncut sheets, or "master copies," they used. Now that my collection is large enough, I am reasonably close to actually making a fully functional Alpha playtest Cube, including basic lands. I know "Cubes" weren't a thing in 1993, so I hope to one day complete it and have some of our top Magic players compete in the most old-school Draft possible! The problem is finding more playtest cards. It is not an easy task. I can go a year or two and hear nothing, only to then find an old employee with a full deck gathering dust in his or her closet. So I hope that day comes again soon. Short of knocking on doors, I may be in for a long wait. Or maybe I'll receive an e-mail tomorrow. But I do have to stick my neck out there.

This is where Keith is only one person.

I dropped off the map around 2008, and when I returned in 2010, I started hearing rumors about a guy in my town with a most legendary misprint collectionâ.â.â.âit turned out it was me! For some reason, in my two-year absence, the Magic community started to care about misprints. As I looked around the Internet, I saw nothing but misinformation. Yes, misinformation on the Internetâshocking! But I had one hell of a time finding good information, and it rather upset me. So if you want it done right, do it yourself! So, I got started. And being one of only a few with this kind of knowledge, let alone the even shorter list of us geeks sharing the knowhow, I did all right. People started paying attention, and now misprints aren't so unusual to collect.

Let him speak directly to you in two of his YouTube videos on the subject. 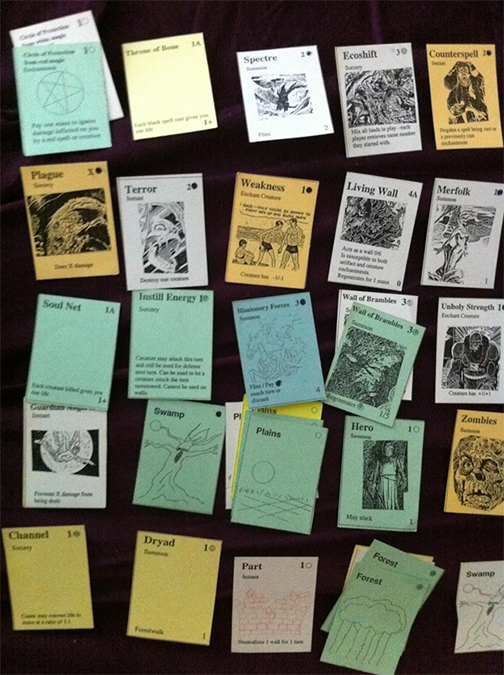 Image via Rahuldave on Board Game Geek

I highly encourage you to immerse yourself into this oddity of cards. While Magic Librarities has an archive of past links, shown below, it lacks a clear and easy way to document each new playtest card found, connected to an Alpha card in a systematic way. Theyâre not a project-in-process site; it wasnât made for that. Itâs made for solid, encyclopedic things.

A project must be done to document the earliest of hard evidence of the game of Magic: The Gathering, and thatâs where the project comes into play. Iâm a curator at heart, and while my Alpha art interest has moved into a larger-scale project, so too should this effort for future academics, archivists, and curators. I think itâs fair to say that itâs not if Iâll have an original Magic art exhibition in the future, but rather when and where. Alpha playtest cards should be no different. Seeing over a hundred in person at a Grand Prix would be a fantastic addition. 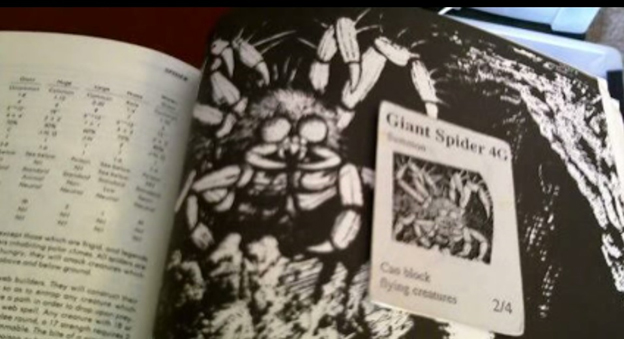 And placing it next to the original Alpha artwork of the same, a card and a didactic, it creates a complete glimpse into the full creation of Magicâs earliest cards. 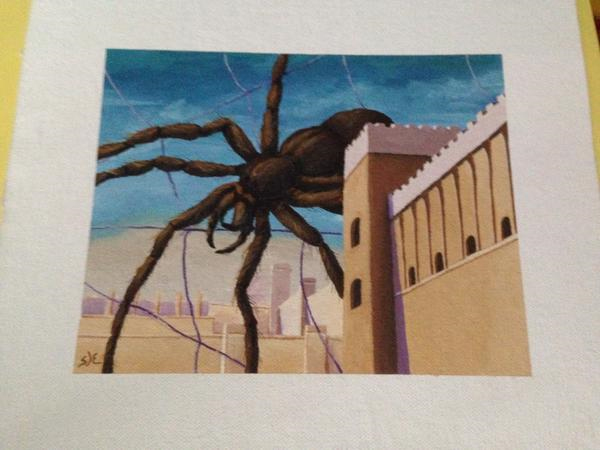 This project needs you to help us complete it. One or two people just simply arenât enough. As the twenty-fifth anniversary of Magic is in three short years and most major art exhibitions need a full year to organize, we need to get moving on this. In addition, with each passing year, chaos occurs, from floods to fires in homes, and this information could be lost forever. Weâre still lucky enough that most of the first playtesters are still alive as well. We have luck with us and a slight window of time on our side. Keith is a godsend, but he is one man. Itâs time to bring this quest of finding all the playtests to eleven! 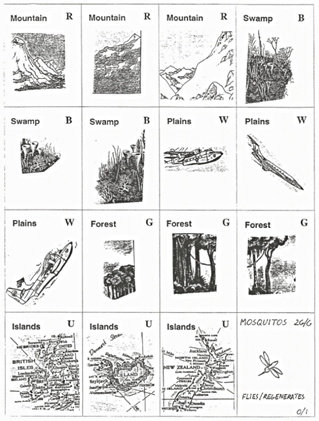 What Needs to Be Done in This Project?

Find a Verified Image of Every Pre-Magic Playtest Card

About one hundred cards from Alpha cards still have unknown playtest cards. These are the ones we are searching for. Some have never been seen, including a full sheet of sixteen cards like the image above; not even Keith has seen every single one.

There are three versions of playtest cards: Alpha, Beta, and Gamma. In essence, they are the 1.0, 1.1, and 1.2 versions before the digital set was laid out to be Limited Edition Alpha, Magicâs first set. While playtesters can be contacted, having personal requests from friends of theirs is the only way to ensure accurate information is obtained. Gamma is largely known, while the other two iterations are largely yet to be discovered.

Not all have art, and those that do arenât all clipartâsome are hand-drawn. It is unknown if each iteration of playtest cards had the same art or if they deviated. Scholarship is needed on how they changed and why. (The rod is from Dungeons & Dragons, being the Wand of Orcus.) 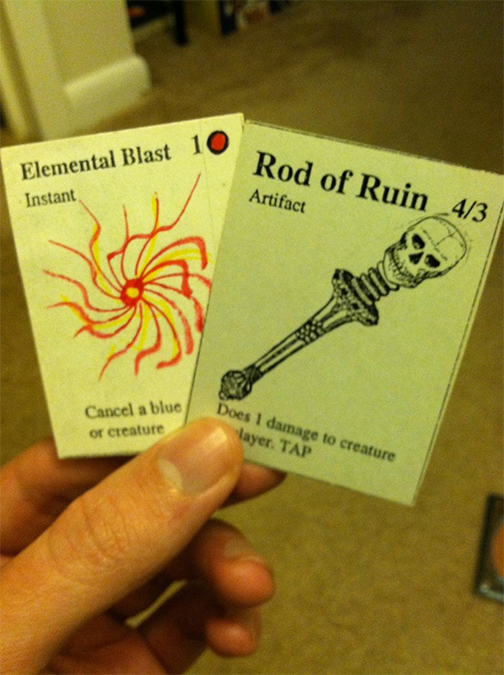 A Public Exhibition of Playtest Art

While Emerald City Comic Con had some of the playtest cards of Alpha in 2013, a complete listing complete with object labels and didactics on each of the cards has yet to be organized. As we create a better, more inclusive database, we can curate future archival inquiries and create additional game design studies. Future academics need

Do you have a podcast? Have Keith on, and help the project!

Are you a game-design student? Write on playtest cards, and include Alpha.

Are you a tournament organizer? Think about having an exhibition of Alpha playtest cards.

#MTGAlphaPlaytest is one suggestion to use; if you have a better idea, let us know!

The webmaster over at OriginalMagicArt.com, Joshua Krause, has offered to host a listing of the Alpha playtest cards. It will be available very soon, and you will be able to check in on progress! 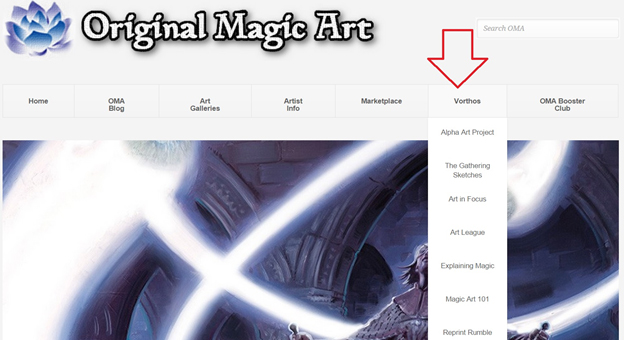 This is the beginning to complete this incomplete source of Magicâs history. We need your help, and this will take time.

Please contact Keith or any of us at Gathering Magic!