I caught a conversation on Twitter the other day regarding the following question: what is the point in playing Magic: The Gathering when your first real deck canât compete anymore. Itâs the point when your homebrew dragon or elf deck gets trounced at a semi-competitive tournament, the point when you think being a Vorthos, someone who loves the art, story and/or flavor of Magic, and competitive deck-building cannot coexist.

Iâm here to confirm that new zany formats do exists where flavor is not only encouraged, itâs the only way to build a deck. Enter the artist constructed format, which uses the vintage rules. Vintage artist constructed asks you to make a vintage-legal deck of sixty or more cards, with a sideboard up to fifteen cards.

A whole metagame exists for the format, as do tournament reports.

This article is to recap some of the new cards shaking up the format and to give a few more readers some insight into art driven deck-building. Letâs start with the metagame, what is considered good in the format. 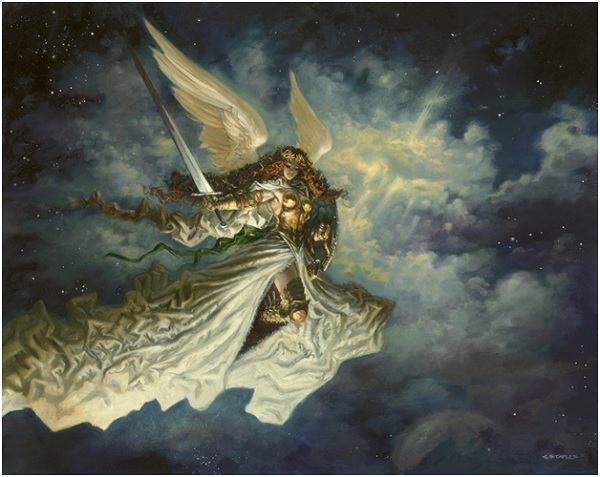 The original boogeyman of the format was a Greg Staples deck due to the first flurry of deck-building built around overpowered Limited cards like Baneslayer Angel, Umezawa's Jitte, and the like. Dave Lee (Derfington) took his Staples build to the first ever tournament at the Grand Prix Las Vegas 2015 event.

Matt Cavottaâs Red deck, with Blood Knight was a direct response to this deck. Hand of Cruelty by Kev Walker, Stillmoon Cavalier by Christopher Moeller, Chris Rahnâs two swords protecting from White and even the marginal Mountain Yeti by Dan Frazier have all flattened this deckâs win percentage.

Wayne Reynolds, whether itâs the removal heavy midrange or the goblin aggro variant, both are staples of the format. The trick to beating both is theyâre light on flying creatures and mass removal shuts the speed down. Zo-Zu the Punisher is the threat you have to remove in the goblins list near immediately.

Mono-Red Decks are in Every Tournament

Decks like Matt Cavotta, Christopher Moeller, Greg Staples, Karl Kopinski and Chris Rahn all have variants of Red deck win builds that are lightning quick. Knowing all of Magicâs protection from Red cards are vital in this format. Here are a few you need to know about:

Akroma, Angel of Wrath in is Chippyâs card pool.

Soldier of the Pantheon in Eric Deschampsâs card pool.

Sword of Fire and Ice, Sword of War and Peace in Chris Rahnâs card pool.

The format is yet to have a banned list outside the Vintage normal, though these five cards are being examined very closely. Had Lodestone Golem been allowed as a playset, Rahnâs deck would be overpowered. Were he to receive a plains commission, the swords would be playable turn two, equipped turn three with a 1-drop with exalted. That cannot be bested in the format after sideboarding without silver bullets.

As for Umezawa's Jitte, every deck in the format needs a removal spell on hand, a way to destroy artifacts and cheap answers to creatures because of this one card. While Ryan Jones took down the Grand Prix Minneapolis crowd with a

build below, the deck still hiccups and due to being light on removal, can be beated.

The new cards made strides toward two decks finding a home with Doran, the Siege Tower and Serra Ascendant. As Howard Lyon has received religious figures like angels often, itâs only a matter of time before his deck can fire. Rob Alexander can play any card due to his land base, but like all older landscape artists, their creatures are just not strong enough for a Constructed deck. As many 3-drop 2/3s could be good enough due to Doran, heâs getting closer too.

The new reprinted Oblivion Stone makes you reconsider Gabor or Zoltan, as the two artists worked on a wide variety of cards together, you have to choose one of them as your artist. Most people choose Zoltan Boros due to his charms and Hordeling Outburst, which Iâll cover soon. The differences Iâve listed below.

There is a menace theme for Boros, if you go the Deranged Whelp/Fire Shrine Keeper plan with pump spells like Infectious Bloodlust, itâs a serious deck in a format light on removal spells..

You can go wide with token creatures in Hordeling Outburst with Raise the Alarm and Great Teacher's Decree. Add in a Tenacity for good measure and having a Planeswalker doesnât matter. The goblins alone there made me run Goblin Sharpshooter in the sideboard in Wayne Reynolds builds. Add in Massive Raid as a way to end the game and you have an early and late game plan.

I love charms, especially in a format with a low amount of knowledge of your opponentâs decks.

I personally love playing with these two artists as their options are wide open. Check out this shell using Glare of Subdual. This build wasnât possible due to removal heavy decks annihilating it but with Devoted Crop-Mate, it can work, especially in stalemates. Add in Predatory Focus with your Unquestioned Authority, with Refraction Trap for the Red heavy decks and you have yourself a good start for a new deck.

And of course, no metagame is complete without some new rogue decks. Check out these two spicy concoctions. Howard Lyonâs deck went live with Serra Ascendant while Matt Stewart has a forest via Amonkhet block, opening up his inexpensive build of Green stompy creatures.

Scatter to the Winds is now gone, replaced by the backbreaking Mana Drain. The deck went from fringe playable to being able to turn three play Vintage and have a Wurmcoil Engine in play. I still am unsure if Dave Leeâs build can be adapted, shown below. (Derfington) Itâs very close to being in the metagame as Raymond is bound to have another Black card. With River's Rebuke, heâll find his way into this creature heavy format soon.

His 4/5 creature now makes a deck. With Prey Upon, you have a draw spell with targeted removal. Of course like many VAC decks, itâs weak to evasion and flyers, though the Martyr's Bond and Unruly Mob mini combo could be quite devastating. Itâs worth a look and the deck is inexpensive to build.

Thatâs it for today! This winter weâll revisit new cards from now until then.