Welcome to the Life ofâ.â.â.â series! I became interested in what makes Magic a part of the lives of people around me, and decided to find out about it and report back. Every other week, this column will tell you all about the lifestyles of people from different walks of life, from FNM grinders to YouTube personalities. I will take you through their origin story to what they do every day to be part of the Magic: the Gathering community in hopes of giving you a broader cross-section of the community than you might normally see.

If you have ever watched a Magic-related YouTube video, there is a good chance you know Brian Lewis, but not by that name. Brian is better known as his alter ego, âThe Professor,â proprietor of Tolarian Community College and star of the Tolarian Community College YouTube channel. His tweed jackets and sweater vests are as distinctive as the comprehensive tests he does in his review videos, and he was nice enough to sit down and tell me all about his life as The Professor. 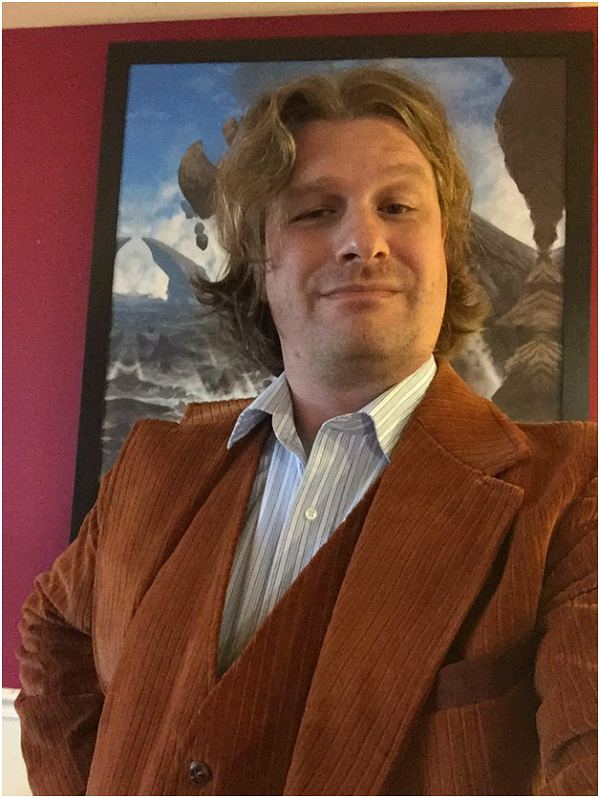 The Professor, seen here in a corduroy 3-piece suit.

Like all good superheroes, the Professor has humble origins. He started playing Magic in high school âfor the reason most people started â to meet girls.â He was interested in a girl who played Magic, so he decided to learn it as well. He found that Magic opened up opportunities for socializing with his peers that he hadnât had before. He said that games in general help communication and give people, especially shy people, things in common to talk about with others. He stopped playing when he went to college, and returned to the game when Innistrad was released in 2011. Once again, he found greater social opportunities opening up because of the game. âItâs very hard to make friends as an adult, and getting back into Magic became this wonderful thing where I was making a lot of friends,â he said.

Tolarian Community College started out as a spontaneous act of creation. The first video on the channel, a review of some of the most popular sleeves on the market, arose because of a personal connection to the subject. Brian says that he was obsessed with cards in as perfect a condition as possible, so he had lots of points of reference for the âdefinitive videoâ on the subject. He says that when he posted the video, his goal was to get one check from Google-100,000 views. The video, since 2013, has amassed over 400,000 views.

Brian notes that the products he reviews can be expensive, and he wants to help his viewers find the best product for themselves. He thinks that what sets his videos apart from the typical YouTube fare, and why the channel has gotten so popular, is because of the thought he puts into his reviews. He says the way that The Professor spends time explaining and testing and critiquing products sets him apart from the ârage and shallownessâ of unboxing videos. This comprehensive coverage of the range of products available to Magic players had a consequence. He says that for a long time, Wizards of the Coast would not feature his videos because he says both positive AND negative things, so he could be critiquing a sponsor or endorsing a competitor. He ended up missing out on some of the publicity offered by the Daily Magic Update as a result of offering views that he believes in.

Tolarian Community College features a variety of content, from the trademark review videos, to sketches featuring cosplayers and other personalities, to the Magic the Amatuering podcast. Each of those videos displays high production quality, with tight editing and multiple camera angles. Brian started by producing one video a week, and is now up to three, plus producing video for MTA. He says that each video takes between eight and twelve hours a week. âItâs a full-time job,â he told me. Just because itâs a job does not make it work, though. âHaving this be my job is basically wish fulfilment.â Brian has a wife and young son, and says that he tries to finish his work each day to spend time with them. Sometimes, though, the work catches up to him. He told me he was burning the midnight oil to finish his most recent video.

Brian jokes that âIâm too busy to play Magic because I need to make this video about Magic.â He characterizes himself as a casual player, saying that he plays Friday Night Magic and Game Day over competitive events like Grand Prix. He does find time to play sometimes, even branching out into another game. âI spend the rest of my free time outside of my videos playing Magic. Iâve been getting into Pokemon â itâs Magic-lite. Itâs very relaxing to play after a day of Magic.â

In spite of his busy production schedule, The Professor has managed to make it to a couple of large events â three on the West Coast: GP Vegas, GP Oakland, and GP LA, along with when Wizards of the Coast flew him to PAX West earlier this year. Because he isnât interested in competitive Magic, he always went âas a content creator, to meet people,â he said. GP Vegas was the first time he talked to Wizards of the Coast representatives, where they asked if he had changed his point of view from the complaints that he had voiced in a video about Modern Masters 2. He had not.

By PAX, these disagreements had not gone away.

Of his PAX experience, he said that âit was odd [to be chosen over a less critical YouTuber], but it was a great experience for me.â He said that he got some unexpected reactions to an interview with Mark Rosewater. The interview was a series of questions that Mark, because of a certain level of secrecy maintained by R&D, could not answer. For example, he starts off by asking âSo, when is Damnation being reprinted?â He said that some people told him that he had wasted his interview. Brian says he thought that The Professor asking MaRo unanswerable questions âwould be funny,â so asked Mark to tell him what those questions were.

When I asked him about the challenges of being an online personality, Brian said that one thing people need to do in the Internet Age is to âidentify which is real and that which is not real.â He also thinks, though, that people not knowing the âreal meâ is a problem. In order to inject humor into his videos, Brian uses the persona of The Professor, who is well-meaning but pretentious and âhoighty-toighty.â He says the character is a funny concept to him, and what he would be like if he takes himself seriously, which is contrary to his actual personality. âI think of myself as a **-up,â he says. Brian says that the best part of his lifestyle is that he gets to present a finished product and present it to a large audience. He adds, âI get touched beyond words when I get a message saying that I had any impact on their lifeâ.â.â.â People meet friends and lovers through gaming, and people attribute that to my videos.â He reacts strongly to the praise of others: âI feel good, but I feel like I donât deserve it.â Brian told me that he stayed up until midnight so he could see the first replies on [his latest video] the night before this interview.

Being the largest Magic-related YouTube channel is not without its share of responsibilities. âIf I do have a voice, I like to use that voice to help others,â Brian says. He considers issues like equality and diversity to be important. He believes that âpeople should be alarmed by exclusionary behaviorâ.â.â.â between play it safe and play it right, I am going to play it right.â One major way that he will do that is by amplifying others. Because he is not personally affected by issues like sexism, he will instead give others who can speak about it on a personal level a platform and an audience, typically via his Twitter account.

I consider Tolarian Community College to be a marvelous product of creativity, and I hope you can see that too, whether you agree with The Professorâs views or not. Brian took something that he was interested in and he ran with it. I asked him what advice he had for anyone who wanted to make something, and he said that âThe best advice, and this is important, is to make content that YOU enjoyâ.â.â.â Create something FOR and BY you. If you make something for and by you, people will gravitate toward it.â

Gravitate we have, Professor.

Thanks so much for reading! Be sure to check out Brian at his YouTube channel and on Twitter (@TolarianCollege). Come back next time to read another account of an exciting Magic life!