All right, article done; see you guys next week. What do you mean thatâs not an article?

I guess I could talk about Modern. If youâre interested, I do have a short list of Gatecrash cards that are seeing play in Modern at the bottom of this article. Instead of focusing on Gatecrash itself, Iâm going to do a post-Gatecrash, post-bannings metagame analysis. I find when I start crunching the numbers, it helps me a lot when Iâm preparing for tournaments because it gives me a good idea of what to expect and where to focus my testing. I hope this information will help you to do the same thing.

Iâm going to be basing my analysis on Pro Tour Qualifier Top 8s and Magic Online Premier Events in the period February 1â18. Iâm making the assumption that the overall metagame looks like the composition of Top 8s, which is by no means an accurate assumption. However, it should serve as a reasonable approximation. Hereâs what the metagame looks like: 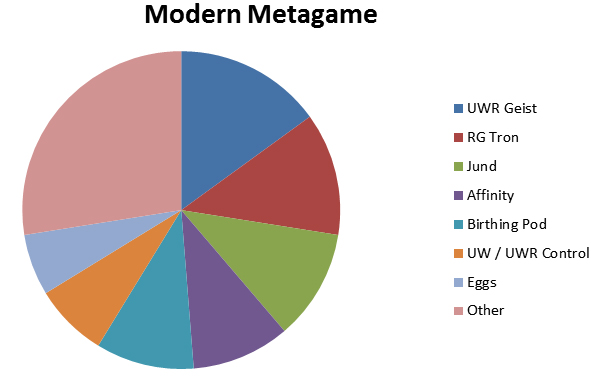 As you can see, the format is fairly diverse. Over a quarter of the field is composed of rogue decksâlesser-known decks that individually comprise a small proportion of the metagame. The decks Iâve listed in the chart have been the most successful archetypes, but Iâm only going to focus on the top five here: R/W/U Geist, R/G Tron, Jund, Affinity, and Birthing Pod decks. Letâs go through each of them.

This is obviously the deck Iâm most familiar with. Efficient creatures, cheap counterspells, and burnâwhatâs not to like? If you havenât already, I recommend you check out last weekâs article for a first-hand account of how the deck plays out. You can try out the version that I played or check out Josh Tabakâs PTQ-winning list:

There are a few things that I like and a few that I donât about this list. This deck maxes out on burn spells and has additional direct damage in the form of Grim Lavamancer. The Lavamancers especially seem great and completely dominate opposing decks that have to rely on small creatures. This list also has more of a top end for when games go long, as both Baneslayer Angel and Batterskull are great late-game top-decks.

What I donât like about this deck is that it only plays three Geist of Saint Traft, a.k.a. the main reason to play this deck. Iâd play six of them if I could. My experience with the deck was that it was very hard to win without it, so Iâd definitely want to maximize my chances of drawing it early and often. A card Iâm not a big fan of is Mana Tithe because of how narrow and situational it is. The only reason Force Spike was good back in the day was that it was the only way for the old permission decks to counter a spell on turn one without Force of Will. Those decks had a hard time beating anything that hit play, so it was important they counter every threat. Nowadays, permission decks canât exist because of all the cards that evade counterspells. (Iâm looking at you, Cavern of Souls.) Not only that, but there are actual choices for 1-mana counterspells, such as Spell Pierce and Spell Snare. Itâs a horrible top-deck and is near-useless if your opponent is on to you. Youâre going to have a hard time convincing me that Mana Tithe is optimal.

Overall, Iâd say this is among the best decks in the format. You have game against almost anything, although you can run into trouble against swarm decks like W/B tokens. Decks that have large creatures that survive Lightning Bolt can also be a problem. This deck is great at switching roles between aggro and control, so knowing when to be the beatdown is very important.

This deck has been a Modern staple ever since Charles Gindy unleashed it upon the world. I donât think this deck is a good choice since a lot of its matchups are completely lopsided, but I canât argue with the numbers. Hereâs the list Daniel Gushen used to crush my buddy Morganâs dreams in Detroit:

This deckâs game plan is to assemble the Urzatron (duh) and use it to power out colorless boom-booms. A lot of decks have a hard time dealing with an early Karn Liberated or Wurmcoil Engine, and the combination of Eye of Ugin and Emrakul, the Aeons Torn ensures you have a nigh-unbeatable late game. The deck has a lot of card selection, cycling, and tutoring, so finding the cards you need usually isnât a big problem. This deckâs biggest strength is also its biggest weakness: the lack of player interaction. Your opponents usually canât do much to stop you from doing what youâre doing, but you also donât have much ability to interfere with your opponent.

Iâll go back to that âlopsided matchupsâ comment. I find that this is an example of a glass cannon (link is NSFPâNot Safe for Productivity). You have matchups that are very hard to lose, and you have matchups that are very hard to win. This deck absolutely crushes âfairâ decks but has a very hard time winning against combo decks such as Splinter Twin decks and Infect. By choosing a deck like this, youâre leaving yourself at the mercy of the random pairings. Sometimes, that can work out well; other times, youâre running the 0â2, Drink & Draft.

Still, as far as glass cannons go, this one is sturdier than most. It has more good matchups than bad ones, and even the bad ones are winnable if you draw the appropriate sideboard cards. Iâd recommend this deck for you if you like casting huge spells and are willing to roll the dice on getting good matchups.

Ah, the boogeyman of the format. Banning Bloodbraid Elf did very little to harm the viability of this deck. If anything, Bloodbraid Elf was among the worst cards in the deck, leading some players whom I have a lot of respect for to cut it even before it was banned. The actual best card in the deck is Deathrite Shaman. It powers out a turn-two Liliana of the Veil, messes with your opponentâs racing math, and ruins almost any graveyard strategy. And, oh yeah, the rest of the deck has some pretty darn good cards in it, too. Hereâs a list Hiroki Tsuchiya used to take down a Japanese PTQ:

This list is a bit different than typical Jund decks, but if anything, that highlights one of this deckâs key strengths: its customizability. You can build a Jund deck to beat anything you want. Want to beat combo? Play more discard. Want to beat aggro? Play Kitchen Finks and Huntmaster of the Fells. This flexibility extends to the sideboard as well, as this particular color combination has a plethora of great options.

Jund remains a great choice to PTQ with because it gives you so many options. If anything, Iâd say itâs being under-represented in the metagame, perhaps because people are overreacting to the bannings. Before settling on a list, Iâd recommend doing your own research to see what flavor of Jund suits you best.

If youâre good at predicting local metagames and like tweaking decks, Jund is the deck for you.

Yes, Iâm calling it Affinity despite that the deck rarely plays any cards that have affinity for artifacts. Big whoopâwanna fight about it? Affinity decks of today bear little resemblance to the terrors of old, but Memnarchâs minions are still a force to be reckoned with. Hereâs a list Michael Agre took to the finals of a PTQ in Kansas City:

This deck is all about one card: Cranial Plating. Nine years and multiple bannings later, this card is still a huge beating. Attacking for 10 out of nowhere isnât unusual for this deck. I would go as far as to say that this is the best pure aggro deck in the format, and it preys on the unprepared like nobodyâs business. It is capable of some incredibly explosive draws that can kill your opponent before he even knows whatâs happened.

This deck isnât without its weaknesses, however. Many decks have highly effective sideboard cards against affinity, such as Ancient Grudge and Stony Silence. Affinity can also have a hard time recovering from multiple removal spells, as many of its cards are very weak on their own. A couple copies of Path to Exile or Lightning Bolt can really ruin your day.

I should note that out of all the decks Iâm surveying here, Affinity was the only one that didnât win a Pro Tour slot (or win a PE for that matter). You can take from that what you will, but I choose to interpret that as a sign the deck is good at making Top 8 but isnât good at actually winning the tournament. Still, if you just want to attack, you could definitely do worse than this deck.

This is the deck Iâm least qualified to offer an opinion on, but Iâll still talk about it here so that you have an idea of what to do if you come up against it. Letâs take a look at Tim Ealeyâs deck, again from Kansas City:

This deckâs main route to victory is combining Kiki-Jiki, Mirror Breaker with either Restoration Angel or Deceiver Exarch. The legendary Goblin can make infinity Angels or Exarchs by using their respective enters-the-battlefield abilities to untap Kiki-Jiki. This deck has a lot of ways of making that happen, but they tend to hinge on either Birthing Pod or Chord of Calling. It can be a scary deck to play against, as there are many different sequences that can just kill out of nowhere. Some versions of this deck also play the Melira combo, which combines Melira, Sylvok Outcast and Viscera Seer with either Kitchen Finks to gain infinite life or Murderous Redcap to deal infinite damage. This deck has a pretty reasonable Plan B as well, which is just attacking with your random assortment of creatures. Gavony Township helps out with that plan a lot, as it ensures you will be able to eventually win any sort of stalled board position.

If this deck has a weakness, itâs that it doesnât do a whole lot if it doesnât resolve a Birthing Pod. There are a lot of effective sideboard cards that can render the Plan A useless, such as Torpor Orb and Stony Silence. Fortunately, you do have ways of removing these troublesome permanents.

If you do decide to pick up this deck, you need to do three things:

I canât stress that enough. This is a very difficult deck to play optimally, as there are a lot of subtle interactions that arenât immediately obvious. You need a plan for how to resolve your Birthing Pod interactions in every conceivable situation. You need to know how to beat hate cards. I canât tell you how to do those things here even if I knew, as thatâs an article in of itself.

That about wraps up my Modern metagame analysis. Leave a comment if you thought that was helpful. As promised, hereâs a brief list of the top Gatecrash cards for Modern. I basically just did a tally of all the Gatecrash cards that made the Top 8 of the above tournaments, so here are the raw numbers:

Iâm playing another PTQ this weekend in Toronto, so if you see me there, feel free to say âhi!â Good luck in your PTQs, and Iâll see you guys next time.