During the break between the Magic 2015 Draft and Standard portions of Pro Tour Magic 2015 , Pro Tour Historian Brian David-Marshall shared results of voting for the 2014 class of Pro Tour Hall of Fame inductees. This year, three people will be inducted into the Pro Tour Hall of fame for their tremendous achievements on the Pro Tour and their contributions to the Magic community. We would like to extend a very well-deserved congratulations to Makihito Mihara, Paul Rietzl, and Guillaume Wafo-Tapa - your 2014 Hall of Fame inductees.

These players sat down with Brian David-Marshall for interviews about what Magic means to them, how they reached this point in their career, and the people who supported them along the way. These players are true titans of the Pro Tour, and the infographics from the live coverage do a fantastic job of capturing the incredible careers of these players.

Congratulations to Makihito Mihara, Paul Rietzl, and Guillaume Wafo-Tapa - the 2014 Class of the Pro Tour Hall of Fame. 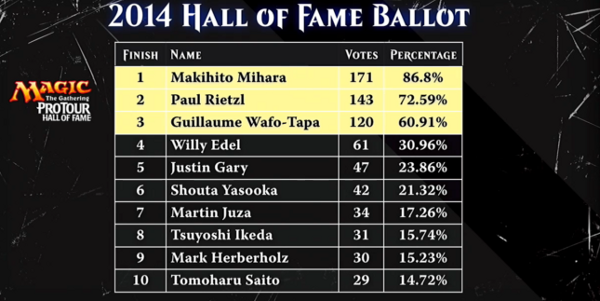