Magic is a game of numbers: sixty cards, 20 life, draw two cards, take 7 damage, and add three counters. There are even more numbers surrounding the gameâfacts and figures, prices and trivia, they are everywhere. In Affinity for Numbers, I uncover and highlight some of the more interesting numbers in Magic. Today's numbers are all about the forthcoming expansion Oath of the Gatewatch.

It will cost you nothing to switch Wandering Fumaroles from a 1/4 to a 4/1 creature. That's a pretty nice beat stick and good use of surplus mana. Fun fact: A fumarole is an opening in or near a volcano, through which hot sulfurous gases emerge. I have no earthly idea how such a thing could wander, but it seems clear that somebody went deep into a thesaurus for card names this time. 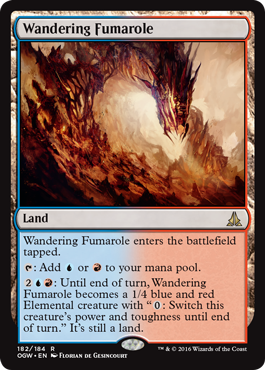 Remorseless Punishment gives your opponent a choice about how your 5-mana sorcery affects him or herâ.â.â.âusually not great, and the card is probably a bulk-rare-to-be. What is great, however, is this phrase: "Repeat this process once." There's something inherently awesome about subjecting your opponent to the same effect back-to-back. I hope to see this phrase on more Magic cards in the future. 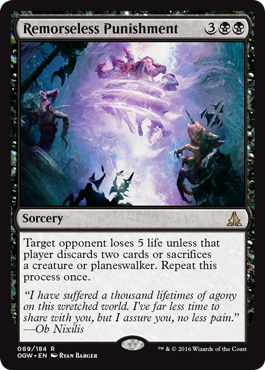 For most people, Hedron Alignment is a hexproof scry engine for

. For all of the Johnny players out thereâ.â.â.âit is a challenge. Do it, Johnny; do it. 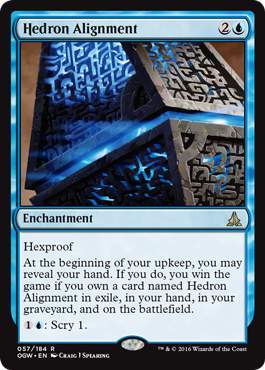 The rich get richer with Hissing Quagmire. Abzan and Jund players have yet another option in their colors. Dies to burn, you say? Oh sure, it'd be better as a 1/4, but do try to be reasonable would you? 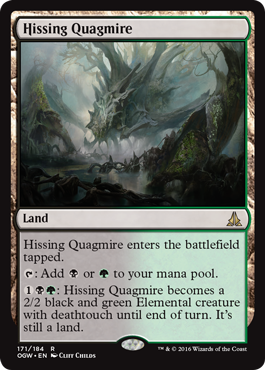 Welcome to the big leagues Eldraziâyou get your own charm! Warping Wail and will allow a player to exile a threatening or annoying creature, or counter any sorcery, or create a 1/1 Eldrazi Scion. The first two have led to a whole lot of licking of lips and gnashing of teeth, depending on what decks you love to play or hate to play against. 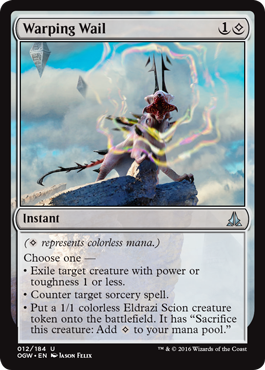 Goblin Freerunner is a nice, aggressive common. I like Alex Ullman's take on it as a turn-two, anti-Delver play in Pauper. I also like the flavor text. 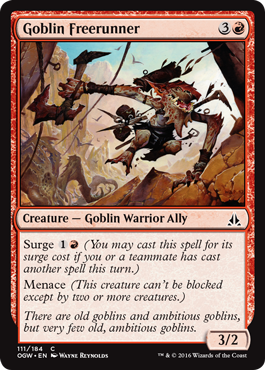 Green is prominent in Standard, and green decks will have little trouble finding a creature, Planeswalker, or land they'd like to play.

Five creatures from Oath of the Gatewatch sport four abilities: Endbringer, Sphinx of the Final Word, and, I guess, World Breaker, Bearer of Silence, and Dimensional Infiltrator if you want to count devoid. 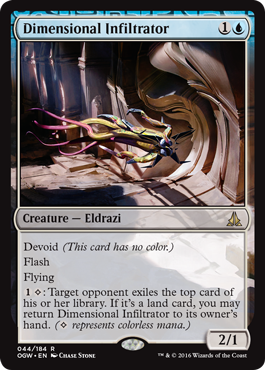 This is a significant number given Standard had only twelve such creatures already (four with devoid). 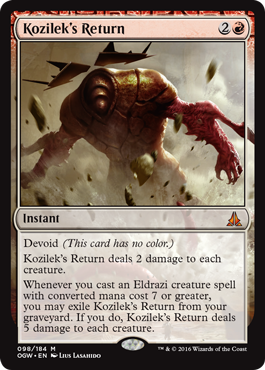 Does this mythic-rare instant make Eldrazi Ramp a tier-one Standard deck? Does devoid make it a better choice against Affinity and Etched Champion in Modern? Is there room for it in Tron? Maybe, but preordering is still a sucker's bet. If Kozilek's Return starts seeing a lot of play, the rarity will drive the price up higher than $14, but chances are it goes down first.

Colorless mana is here. It is different from generic mana, and it has its own symbol. Wizards took pains to support this change in Oath of the Gatewatch with fourteen cards that produce colorless mana.