Magic is a game of numbers: sixty cards, twenty life, draw two cards, take seven damage, and add three counters. There are even more numbers surrounding the gameâfacts and figures, prices and trivia, they are everywhere. In Affinity for Numbers I uncover and highlight some of the more interesting numbers in Magic.

Jace, the Mind Sculptor is being reprinted for the third time in Eternal Masters. The first time was of course in Worldwake, where Jace redefined power in Magic. The second was as one of the main reasons to buy From the Vault: Twenty. The card also appeared in the online-only Vintage Masters set.

Wizards is finally printing a good counter spellâ.â.â.âwell, to be fair, reprinting. Counterspell is being reprinted in Eternal Masters and features new art, its eighth version. 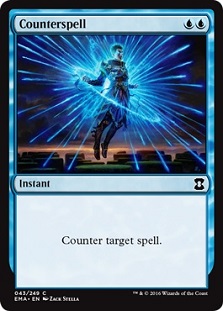 Can a Blood Moon deck get there in Modern? Zhengdong Shan went undefeated on day one with this Black and Red version featuring Goblin Dark-Dwellers.

Ethan Brown finished second at Grand Prix Los Angeles, beating Joe Lossett and Pascal Maynard in the process. Thing is, he is only thirteen years old. Kid's got time to catch Finkel.

The first one is freeâ.â.â.â In a recent article, Mark Rosewater announced a new method to lure players in and get them addicted to Magic. Step one are Mono-color, 30-card decks built around a Planeswalker given away for free at stores and special events. A pair of them can be combined to make a Standard-legal deck. You know how it goes though, once you get that first tasteâ.â.â.â

In January of 2017 Wizards will publish Art of Magic: The Gathering: Kaladesh, the third in a recent series of Magic art books. This one will have 240 pages and will include art from 95 artists showcasing Kaladesh, Chandra's home. The first book, featuring Zendikar, was all kinds of awesome. The second book with art from Innistrad comes out this July.

The average cost of an Eternal Masters booster box is about $300 as I write this. Based on an MSRP of $9.99 per pack, a box would cost about $240. I wouldn't buy a box for $300 though unless you reaaaaaaaaaaally need it right away, odds are prices will drop.

After Innistrad, Magic travels to Kaladesh for the next two-set block. "Kaladesh", the larger set, releases on September 30 and "Aether Revolt" launches January 30. Combined they will bring 448 cards to the game.

Infinite mana is coming to Eternal Masters limited thanks to the inclusion of both Animate Dead and Worldgorger Dragon. For those not familiar with the combo, you animate the dragon, which exiles Animate Dead and everything else, which causes the dragon to leave the battlefield and return all your permanents including Animate Dead. You rinse and repeat, tapping your lands every time, until you decide to animate something else and use your mana to presumably do something totally awesome.