Magic is a game of numbers: sixty cards, twenty life, draw two cards, take seven damage, and add three counters. There are even more numbers surrounding the game â facts and figures, prices and trivia, they are everywhere. In Affinity for Numbers I uncover and highlight some of the more interesting numbers in Magic. Once again this week, those numbers are all about Eldritch Moon, the next Magic expansion to be released on July 22.

The sun and moon icons used to indicate the transformation of werewolf double-faced cards were a staple of the Innistrad expansions, until the Eldrazi arrived. Now corrupted werewolf horrors transform into Eldrazi Werewolves. Only one normal werewolf remains: Ulrich of the Krallenhorde. 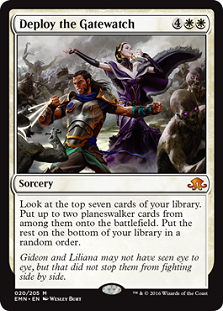 Liliana is back. Once again, she costs 3 CMC. No veil, but that -2 is pretty tasty. 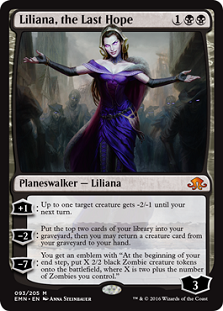 The other Planeswalker from Eldritch Moon is Tamiyo, Field Researcher. She is just the third three-color Planeswalker in Magic, following Nicol Bolas, Planeswalker and Sarkhan Unbroken. 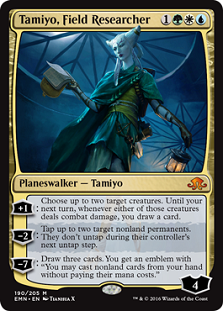 4 creatures that redirect damage to a player

The reveal of Nahiri's Wrath has janky combo players everywhere pondering how to use it to whack the opposing player. 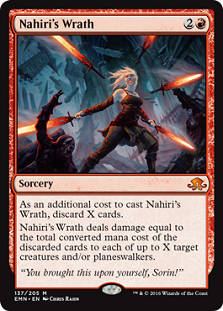 There are four creature that redirect damage from themselves to a player.

Chances are only half of these are under any sort of consideration in said decks.

Eldritch Moon brings us five new Commander options. Only two are multicolored and only Thalia can be a tiny leader.

Nine cards were reprinted in Eldritch Moon. Murder moved from common to uncommon. The rest did not change rarity. Two cards, Hamlet Captain and Prey Upon, were originally printed in Innistrad and the captain was the only reprint without new art.

Check out the change in Prey Upon from the original art. Very cool.

10 instants that can counter abilities

Summary Dismissal is a brand new "stack wrath" that lets you counter all other spells and abilities. 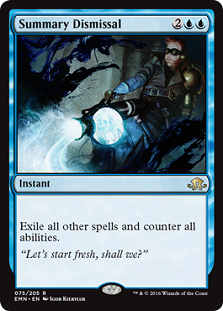 It is a rare effect. Only nine other cards can counter an ability and most of those, like Bind, Not of This World, and Squelch, have limitations on the type, target, or source of the ability. Only 3 others have no such restrictions.

16 cards with abilities triggered when in an opening hand

If Providence is in your opening hand you can reveal it and start the game with twenty-six life. 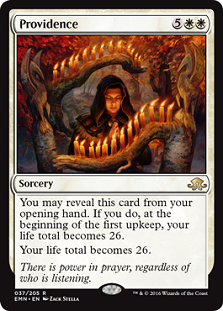 It is the sixteenth card with an opening-hand trigger. The others are Gemstone Caverns and the cards that belong to the "Chancellor" cycle from New Phyrexia and the "Leyline" cycle.