With the latest return to Dominaria in Dominaria United, the Phyrexians are back once again in full force for a brand new invasion. The original ended with heavy losses to the Coalition as Yawgmoth entered Dominaria in the form of a death cloud before being decimated by the Legacy Weapon. The multiverse was safe from the threat of the Phyrexians once again. That is, of course, until Karn brought Phyrexian glistening oil to his artificial plane of Mirrodin where it warped and twisted the world into New Phyrexia.

Now, after years of planning and preparation, this new breed of Phyrexians begin their assault of the multiverse. Kaldheim was attacked, and soon after Kamigawa was infiltrated as well. Now Sheoldred has come to Dominaria and begun to take it over. To do so, she is creating sleeper agents - individuals taken and converted into Phyrexians without their knowing to bring about ruin to those around them. Sleeper Agents were involved heavily in the preparations for the original Phyrexian invasion. Xantcha was one who turned and helped Urza, while K'rrick revealed himself as a Phyrexian and decimated the original Tolarian Academy.

As the new invasion of Dominaria began, the sleeper agents took hold throughout the land. They overtook New Argive courtesy of a compleated Stenn, and also infiltrated the realm of Benalia. During a peace meeting between Benalia and Keld, the Phyrexian menace revealed itself amongst Benalia's ranks. They whisked away the Benalish leader - Aron Capashen, father of Danitha and Raff - before leading an assault against those present at the meeting. Jaya, Jodah, Teferi, Ajani, and Karn fought against these dark forces and prevailed, leading to them bringing together the New Coalition to stand against the Phyrexian invaders. 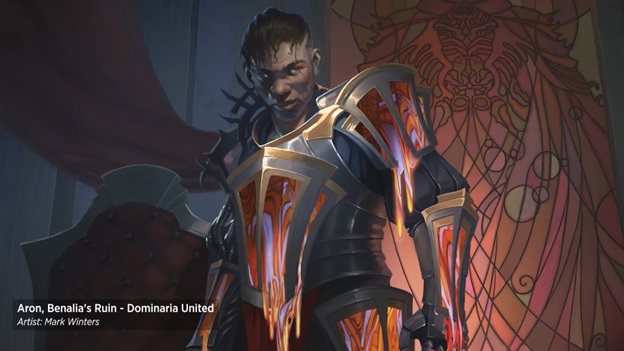 In a standoff against the New Coalition in the Red Iron Mountains, a resurrected Ertai came forward. With him came one Aron Capashen - mutilated, compleated, and remade in Phyrexia's image. A symbol of Phyrexia's inevitable victory against Dominaria, Aron was forced to stand against his former allies. Struggling and resisting against his compleation, he fought against his daughter Danitha. Forming words of encouragement to his daughter despite the evil taking hold of him, Danitha decapitated the former Benalish leader. Ertai would mock the warriors, noting that he would simply put Aron back together and use him to fight alongside Phyrexia once more.

While tentatively finished in the story - supposedly not for long - Aron, Benalia's Ruin presents a particularly potent way to lead a Commander deck. He's cheap, aggressive, and can give your whole board a tremendous boost - at a cost. The once great leader of Benalia is here to command a powerful army by any means necessary, even if it involves culling the weak to buffer the mighty. Let's check out a list and see what new evils this new hero of Phyrexia brings to the table.

When it comes to running Aron, however, you can't just recklessly sacrifice things over and over again. You need to take a bit of a more nuanced approach. Most sacrifice decks just want you to make anything and everything disposable. This might make you more creatures, let you get back creatures, force opponents to lose permanents, and so on. Aron wants you to sacrifice toward the benefit of other creatures you control. Because of this, you can't simply get rid of everything just because. You want to build an army that gets bigger while finding ways to still be able to sacrifice something repeatedly.

This is where a lot of recurring creatures come into play. It's not uncommon at all to see cards like Bloodghast, Reassembling Skeleton, and Bloodsoaked Champion to make it into sacrifice decks, and for good reason. Each of these makes for an excellent option for a card that can be returned from the graveyard, killed for Aron, and brought back once again. Lurrus of the Dream-Den, Sun Titan, and Serra Paragon can all help bring back many of your smaller creatures over and over again if something happens to these naturally recurring critters.

If you want to make additional sacrificial fodder while also filling up your board, there's no shortage of ways to make tokens in this deck as well. Monastery Mentor, Grave Titan, and Adeline, Resplendent Cathar will all provide no shortage of small bodies. You can also use creatures like Resolute Reinforcements, Doomed Dissenter, and Captain of the Watch to fill the board as well. Best of all, you can sacrifice the base creature and get them back using cards like Phyrexian Reclamation or Sword of Light and Shadow to continuously fill the board with threats. This strategy gets especially silly if you utilize Hell's Caretaker to loop through token generators and make an absolutely massive board in no time flat.

You can give your army a little extra reach with the aid of some other cards at your disposal. Admittedly, there aren't many mass buffs. After all, that's what your commander's for. Should Aron be out of the question, though, you can always lean on cards like Marshal's Anthem and Sorin, Solemn Visitor to boost your army. For any soldier tokens, Captain of the Watch can post a mighty boon as well. You can also give a bunch of creatures flying by sacrificing them while having a Luminous Broodmoth on the battlefield, making them easier to get through. If all else fails, you can use the various Aristocrats-style finishers such as Blood Artist, Zulaport Cutthroat, Cruel Celebrant, and so on to chip away at opponents' life totals and close out the game.

Most of your other cards are largely utility. Path to Exile, Swords to Plowshares, Vindicate, Generous Gift, and Mortify each provide various forms of pinpoint removal. In a pinch, though, you can blow everything up with a Wrath of God or Kaya's Wrath. You can even do either or thanks to Damn. There're a few solid ways to draw cards as well with Night's Whisper and Deadly Dispute. Spirited Companion cantrips quite nicely also and works in perfect harmony with a sac outlet and Hall of Heliod's Generosity. And speaking of powerful land abilities, Vault of the Archangel can put in a lot of work as a way to grant your whole army lifelink and deathtouch. Not only will that make your creatures harder to block, but you'll also gain tons of life out of the deal as well.

All in all, Aron makes for a really cool and somewhat unusual way to build and play a sacrifice deck. While it does still hit on a lot of the same beats as many Orzhov sacrifice decks do, you'll absolutely find it plays quite differently by way of wanting you to actually keep some creatures around. Build your army, attack and sacrifice, and go for the jugular. If you want a unique way to play this classic style of deck, then this will be perfect for you to have a great time at your next Commander night. Just be sure to watch out and not get compleated yourself!