Innistrad is a plane full of monsters and horrors. It's a world filled with those that have it out for the plane's weaker beings - the humans. The humans of Innistrad are a meek and humble folk, who try and live the best lives they can without dying horribly gruesome deaths. They hold faith to the archangel Avacyn, and even in her death continue the tradition under the watchful eye of Sigarda. With their protection, they are able to fight back and hold their own against the horrors of the night. 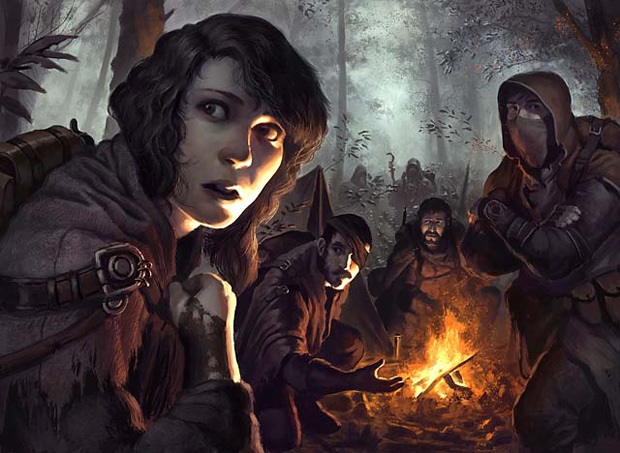 In order to survive, they must come together and face the monstrosities the plane throws their way. Zombies, spirits, vampires, werewolves, devils, demons - and worse. For as weak as they are alone, in numbers they are a force to be reckoned with, and that's hardly clearer than this week's Advanced Jumpstart! We'll be focusing on the humans of Innistrad, but specifically the White and Green ones since that's where the majority of the tribal interactions lie. There are humans in other colors, though, but for those, I'll have to return to them another day.

With that, though, let's dive into our first pack featuring the humans of the original Innistrad block!

Innistrad excelled in its simplicity. It was Limited perfection but never was too complex. The cards were easy to understand and played well together. It's what made the set so much fun, and it especially showed with its many excellent humans. Most of the cards in this pack are actually from that set and not Dark Ascension or Avacyn Restored and for good reason. Dark Ascension was where humans got weaker as they were being overrun by monsters and Avacyn Restored was, well... Avacyn's Restored.

That's not to say there aren't good cards here. Far from it, in fact. Fiend Hunter continues to be a Cube all-star for White creature decks, as does Thalia, and it makes them both excellent choices. Mentor of the Meek is a great draw engine in White for a time when Green's draw power wasn't quite so good. Champion of the Parish and Champion of Lambholt both get massive on their own, while Hamlet Captain, Travel Preparations, Gavony Township, and Mikaeus, the Lunarch pump your whole board.

The only real downside to a pack like this is it might struggle a bit against something with a lot more modern cards, but it's good if you want something a little lower power overall. For something with a little more potency, let's check out the Shadows Over Innistrad block!

Now this is more like it! Innistrad's simplicity may be its strongest point in its own vacuum, but it's also its biggest weakness. Cards get better and more powerful, and that's clear with Shadows block. With the original Innistrad, many of the cards feel like they're a one-off or individual with the occasional mass pump. Here you get more than that. Sure, you still get the one-off effects like Thraben Inspector or Thalia, Heretic Cathar, but you also get excellent wide pumps from Thalia's Lieutenant, Heron's Grace Champion, and Veteran Cathar. Heck, even Hamlet Captain shows up again thanks to a reprint.

Much like how Mentor of the Meek provided a lot of great card advantage in the first pack, Tireless Tracker steps up to the plate here to fill the role. And if you can't draw cards like that, then make a ton of little creatures instead. Westvale Abbey, a flipped Hanweir Militia Captain, and Sigarda, Heron's Grace all help swarm the board with humans ready for you to pump. Even better, sometimes these cards can become powerful forces on their own thanks to those tokens.

One of my favorite cards in Shadows draft, though, was easily Slayer's Plate. It's such a powerful card in both how large its pump is but also how in a deck like this, it can completely overwhelm your opponents. They can either take a ton of damage, chump block your human, or else do a trade that nets you a spirit which can later be equipped with Slayer's Plate as well for massive evasive damage.

Man, did someone say power creep? Tons of the creatures here feel like Limited bombs - and that's because they are! If you were in a draft and ended up with cards like Savior of Ollenbock, Sigarda, Champion of Light; or Adeline, Resplendent Cathar, you're likely going to overtake the game quickly. Each of these boasts incredibly powerful abilities, and that's to say nothing about the other cards in this pack.

Torens, Fist of the Angels packs a wallop that can make you an army of truly legendary creatures. Intrepid Adversary comes down strong early but scales high the later the games go. Augur of Autumn gives you a ton of card advantage. Thalia fills the same powerful role she does in the original Innistrad block pack. And you can't forget Katilda, Dawnhart Prime. Not only does she turn every one of your creatures into a mana dork, but she pumps up everything as well.

What's in this pack is an excellent bunch of synergy that can quickly overwhelm your opponents. However, there are some other excellent choices that could easily come in here if you want to change it up. For example, I considered Brutal Cathar // Moonrage Brute for a minute, but I felt like I wanted this to focus a little more on the humans side of things than the werewolves, but it would be excellent removal here. You could also easily fit in cards like Dawnhart Wardens, Hamlet Vanguard, and Saryth, the Viper's Fang. Heck, if you want a nice thematic spell, Glorious Sunrise packs a real wallop in the endgame.

These two most recent sets are simply in no short supply of great cards and there's tons of ways to build it. You could lean more into the coven ability, play more spells to stop your opponents' creatures in their tracks, or what have you. This is definitely one of the ones you can mess around with and take as many liberties and personalizations as you'd like.

With all that having been said, though, let's bring the sets together and see what we get!

When we bring them all together, we end up largely foregoing the majority of spells we've picked up along the way. That's because the creature base ends up being quite strong on its own and boasts some fairly powerful abilities as well. Want to pump your board? Hamlet Captain and Thalia's Lieutenant have your back. Need to get a creature off the board? Fiend Hunter takes them out quickly and cleanly. And if you need a draw engine, you have Mentor of the Meek and Tireless Tracker at your disposal once more.

With all of the various Innistrad sets, though, there's absolutely no shortage of humans in White and Green. They're one of the most prominent tribes on the plane and get an extra showing because of the plane's werewolves. What's more, there's a lot of excellent spells in both colors that can give you a myriad of ways to customize your own personal Advanced Jumpstart - Innistrad packs. These are my personal choices, but feel free to make ones that you want to build. There's no wrong way and there's tons of excellent options.

Next week I'm going to be trying out some... different things with Innistrad Jumpstart. Non-tribal and off-color packs to help highlight cards that otherwise couldn't really show up in a pack like we'd see here. Most of those will encompass all of the different sets. It should be a fun way to look at some different ways to play with the cards available and check out things like, humans outside of just the White and Green here. They're in all the colors, after all, so let's get them to shine! I'll see you all then!