Bah-weep-Graaaaagnahwheepnini bong, gamers, and welcome back to another article about Transformers: TCG. Wave 4 is now upon us, and with the new set comes a whole new draft meta, full of powerful new cards and new abilities to really push the format in a whole new direction. Weaponizers and Battlemasters are still around, but now throw into the mix are the new Mercenary faction, as well as new abilities like Bounties and Revenge, and the entire formats for both constructed and limited have been turned on their heads.

With all of the new cards, keywords, and abilities being dropped on us in Siege 2, it can be a little hard to figure out just what cards should be top picks and which should be avoided. So, today, we're going to talk about what I see as being some of the top draft picks for the new set. We have to keep in mind that not all cards are going to be the best pick in all situations, but the cards I'm going to highlight today are just solid, high value, general purpose cards that will fit well into just about any draft deck. 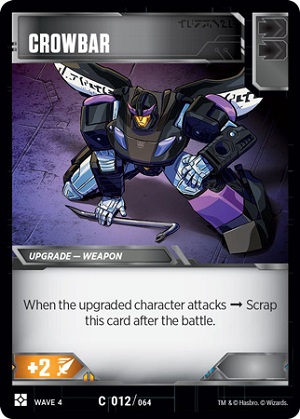 Ah, the good old trusty Crowbar, always good for opening boxes and crates, as well as opening up a world of hurt on your opponents. On the surface it's just a standard weapon upgrade that gives your bot a bonus to attack and scraps itself after battle, but given the overall lack of weapon upgrades that just give a static, unconditional boost to your attack power in the set, this one is a solid early pick. The double black pips for that extra pierce against blue-heavy drafters is also a very nice touch. The only downside to this card is that it does go away when you attack, though that trade-off is worth it for the bonuses this powerful card brings to your limited pool. 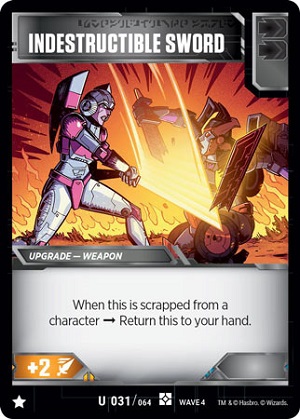 Along the same lines as Crowbar, Indestructible Sword is a static +2 attack upgrade with two black pips for that extra pierce on the flips, and as an added bonus, doesn't scrap itself after combat. Instead, if this card would be scrapped, you just pull it back into your hand to simply play again on another one of your bots, keeping the cycle of pain turning in your favor. All great things come with a price, however, and much like Crowbar's price is scrapping it after combat, Indestructible Sword's price is that it costs a star to run in your deck. In a limited pool, finding a perfect 25-star combination of characters is fairly difficult in its own right, so being able to carve out a spot for this impressive upgrade shouldn't be too difficult. 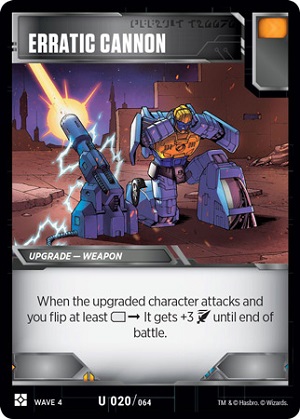 Where Crowbar is a solid upgrade with an unconditional +2 attack, Erratic Cannon comes with some caveats to its usage, but when it comes through, it packs a wallop. Given the pretty even spread of battle icons in this set, the probability of drafting a few whites into your Limited deck is high, so you'll find yourself more often than not being able to get the extra 3 attack. The orange pip that it sports isn't anything to ignore, either. When battling it out in a Limited format, every little bit of extra attack power you can bring to bear during your combat steps is worth consideration. 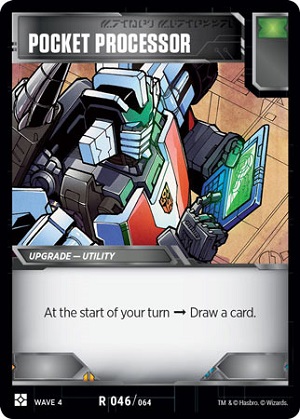 As with nearly any CCG, being able to maintain card advantage over your opponent is critical to coming out on top. More cards in hands inevitably means more options for what you can do on your turn, so you always want to look for ways to draw extra cards. Pocket Processor is exceedingly good in Limited games, as it allows for you to consistently draw those extra cards. It also has a green battle icon on it, which means getting it into your hand even if you don't draw it naturally isn't too difficult. It is a rare card, though, so if you open one of these in your packs, grab it immediately. You won't be sad that you did. 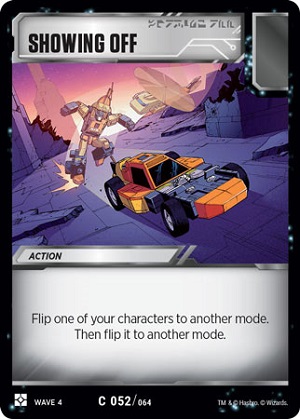 Hoo boy, Showing Off. This card is an absolute beast in Limited play. Sure, it may not have any battle icons, which seems like a pretty hefty drawback, but what it does is invaluable in most Limited games. The massive amount of flip effects present on characters in Wave 4 means that you'll often find yourself wanting to flip your characters as often as possible for maximum effect and Showing Off allows you to capitalize on those abilities more so than just about any other card printed in the game thus far. At a common rarity, there's also a very real possibility of seeing more than one of these come around the table, so grab them if you see them! If you also manage to snag either of the next two cards on this list, you'll already be a few steps ahead of the competition. 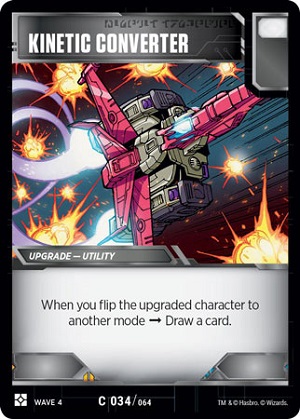 As stated above when talking about Pocket Processor, you never want to give up a card draw engine, and Kinetic Converter is no exception. If your character pool consists of bots with already solid flip abilities, adding a card draw to that is just a bonus. Even if your flip abilities on your bots isn't all that great, you'll still want to find a way to work this your deck. Since it is taking up the usually empty Utility slot on your bots, you don't have to worry about giving up a solid weapon or armor upgrade to play it, either. 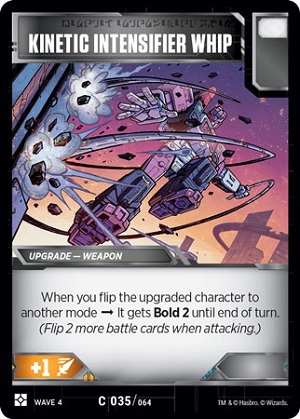 A weapon upgrade with a static attack bonus? Granting Bold 2 when a character changes modes? A white battle icon to enable even more battle icon flips? Sign me up! This card is great in limited and will likely see a fair amount of play in Constructed formats as well. The only major downside I have with this card is that it doesn't also come with a green battle icon to help get it into your hand faster, but we can't have everything. That said, this card is pretty close to perfect. Pair it up with Showing Off from above, and you've suddenly got yourself a bold powerhouse swinging into your opponents with a possible Bold 6! 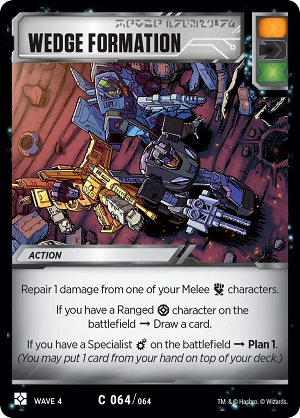 Last on my list, but probably should be first in your mind, is Wedge Formation. The sheer versatility of this card, and at a common rarity, is pretty nuts. Given the way most people's character draft pools end up, it isn't unheard of to have all three; Melee, Ranged, and Specialist; on a single team, and even if you have just one or two of them, this card is still heavy with value. The three battle icons it comes with are very strong, as well, giving you some guaranteed damage, as well as allowing you to pull it into your hand to play on your next turn. All in all, this card is beyond solid, and is a definite early pick in any draft, if for no other reason than to not see it played against you.

A few cards that I think are solid, but didn't make the list, are Medic's Protective Field and Soldier's Blaster. Both of these cards are good but are also very circumstantial. Soldier's Blaster is only a guaranteed plus one to attack, and if your opponent can dictate the flow of the game, or you find yourself up against characters of the same faction, it is just a bit worse than Crowbar and Indestructible Sword. The green battle icon is quite nice, but not quite enough to edge out the benefits of the other weapons on the list.

Medic's Protective Field is a fantastic card if you can get it onto a character before any other damage is done to them, but again, very circumstantial. Since you can't always guarantee it in your opening hand, the utility of it just simply healing 1 and then sticking around as an upgrade with no real great way to return it to your hand isn't fantastic late in the game. There are certainly worse choices, for sure, but this would not be one of my first picks.

So there you have it! My top eight early draft picks for Siege II battle cards! Next week we'll look at my top picks for drafting characters in this set, given all the new options and abilities out there, so be sure to roll on back for next week's article!