Login
0 Item
Advanced Search
Sign In
Create Account
With the Vampires, Werewolves and Zombies all coming out to play this weekend against the Eldrazi horde, I expect this set to be a homerun in the Limited department for the prerelease just like it has been in every other regard. I may be a little over hyped on this set, but, ever since the previews started rolling in, it has been day after day of exciting new cards and synergies all across the multiverse. We havenât seen a set with so few bulk cards in a long while, and even the cards that will hit bulk through their life in Standard likely have a reasonable shot down the road of gaining value for casual/commander or Eternal play. That of course does not help us decide what we should be picking up in the short term, so this week I am going to focus on the cards that should be good to get into week one and ride through the Pro Tour. Next week I will start delving deeper into deck strategy, but this week I have too many cards to cover to go too deep into any one.

Since we all know how good cards like Gisela, the Broken Blade and Tamiyo, Field Researcher will be, I will continue to avoid focusing on those for the first few weeks and instead look at cards you can easily get into in exchange for many of the overpriced singles in the set. As things even out in the first few weeks, you either want to trade into cards that will certainly see play or trade into cards you feel are underrated at first. I prefer the latter and that is what we will be focusing on.

One card I already discussed, Ishkanah, Grafwidow, I believe is really underpriced; and, while I have spent enough time on the card already, I believe Delirium is certainly there and does not have to be a main focus of a deck to be activated by time this card comes down, which even further expands the decks that can play it. I could start posting the decks I will be testing, but I am hoping this weekend will show me more. I donât want to jump the gun, but I fully expect this card to show up at the Pro Tour, if not before, and it is so close to bulk Mythic already I would trade for any I see this weekend.

The easiest way to approach this, for me, is looking down the list of cards arranged by price. This allows me to compare cards of similar value, which, in theory, would need to see similar levels of play based on rarity to remain that value. This really lets you focus on the metagame as a whole and identify both overpriced and underpriced cards much easier than focusing on a particular color or deck. The first step of this journey, once you pile through the high priced mythics, are the high end rares and middle of the road mythics such as Grim Flayer. I usually condense any card between 5-10$ in this list and evaluate them together. Sometimes I will focus the range a little more for larger sets where there may be a lot more in this category. For this set we have the following cards:

I expected this list to be slightly longer, but it does expand quite a bit if we drop another dollar or two. This is a good start for now, though. The next step, for me, is to divide these cards into categories. I have a few breakdowns I will typically do, but the most useful for the first month is looking at what cards slot into existing decks and what will likely see play if color pairings or tribal themes work out. Then, I evaluate how many decks a card can slot into and how many copies you would ideally play. While a lot of this is intuition, it can be reasonable to look at trends and social media to get a good read on what you expect people to be playing out of the gate. While that does not guarantee anything, or that hype alone will carry a card, it does give you an idea of what will show up on camera week one. That will likely be enough to keep a card inflated for at least a few weeks. Of the cards above, I would look at them in three groups: ones that are likely to fall, ones that seem well priced, and cards that have a chance to go up.

While I like the chances of Delirium I am not sure the code will be cracked day one and this card does not line up as well against the meta as one may like leading me to believe this card is likely reasonably priced at it will see some play week one. While the card could go up or down depending on the level of play I believe it will see enough to sustain the price but likely not show up in such an overwhelming force to topple the other Mythics that sit above it in value. The fact that it is a four of in the deck does help but I donât see more than one, possibly two decks being able to run it so I am content trading into these if they are offered to me but I am not psyched about getting into a ton. 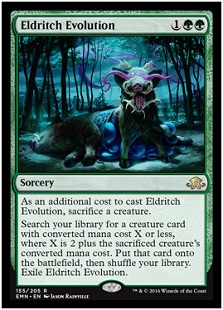 This card slots into more decks, is eternal playable, likely a blast in Commander, and a rare, meaning the ceiling is lower. That being said, I believe the initial demand for this card will be there no matter the results of the first SCG event. This means the price will be stable for at least a few weeks. I donât see this going lower until the Pro Tour, and, with a chance to raise before then, I would not mind at all walking away from the Prerelease weekend with at least a few sets.

While I feel like this cardâs chances of holding value are based on the results from Spirits week one, it does have a chance to slot in a number of other decks already. This means there is some insurance to keep the card from crashing. That being said, unless those decks are dominant, or it finds its way into Eternal formats, I am not sure how long this price can hold at rare. This one is a question mark for sure, but, comparing it to Eldritch Evolution which already has a lot going for it outside of Standard, I am not sure this can keep up. I still think the price is reasonable for the first few weeks but the floor for this card does seem lower to me.

This card does come with a fine body on an efficiently costed creature, but it also has to fight with every other 3-drop in this format, Spell Queller included. That, to me, does not spell success for the current price. Perhaps I am undervaluing the ability, but this has a number of things going against it To remain at the same price as Eldritch Evolution would require a breakout weekend right away, otherwise I think we see this card get hit harder than any other in the set.

While this new Craterhoof Behemoth is certainly appealing for casual and Commander, I am just not sold that it is playable outside of that. Cryptolith Rite may pick this up as a win condition to get through tokens; but, even then, it is unlikely to be a four of and I donât see a whole lot of other homes for it. The card is flashy and will likely hit this price again down the road; but, for this weekend I think I want to get out of them.

This one is a bit of a bold call, but I feel the combo potential with this card expands outside of Standard and all it takes is a few cool lists to pop up to get people excited about looping this creature and reliving the Mistbind Clique days. Overall, the card has a lot going for it and can certainly be a four of as you can easily sac the first copy to just play another leading me to believe we will see a lot of brews week one with the full set. I am not sure what this card does once supply is out there, but picking them up to retain or gain value right out of the gate seems like a move I want to make.

While I donât think I need to discuss every card from this point down in value, I do want to at least leave you with a quick guide list for the cards that may be over or undervalued to start so you have an idea of what to target this weekend and what to move as quick as possible. If you are looking for details on any one card, feel free to leave a comment below or find me on Twitter and I will be more than happy to expand on my initial thought on each:

Any card I did not include on this list is either already set where it will likely end up, or I just don't have enough information to go off of yet. This should give you a good start to work from and at least a few strong targets to pick up. I also left off most cards that are currently bulk, but that doesn't mean there arenât a few gems in there as well, so keep an eye on anything cheap that may follow a theme you expect to pick up in popularity. The great part about trading for bulk is that it is already at the bottom so the low risk involved means you can go deeper or more widespread on your pickups.

Thatâs all for this week. As I said, I will be back to the usual grind next week testing new cards and theory-crafting what our first tournament weekend may look like. For now, I am going to take some time to look at the Limited environment and prepare for the weekend!