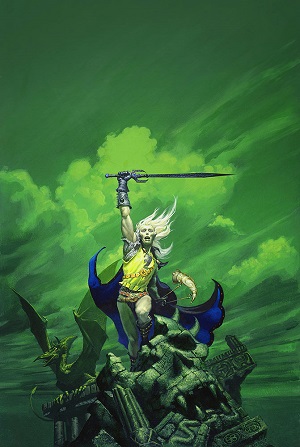 Michael Whelan might be Elric of Melnibone's most iconic artist. In his cover for Michael Moorcock's Stormbringer, a novel named after the soul-eating black blade Elric is fated to wield, the albino antihero holds the sword aloft in a dark horizontal line, a sharp contrast to his own contorting body. His hair whips in the wind. Behind him the sky is an alien green. His eyes glow red, and his mouth is open in an expression of anguish.

It's an effective illustration because Whelan captures something fundamental about Elric that other illustrations miss. Rather than a strutting figure in fine armor, Elric here is a tormented and tattered figure in a strange and ruined land. Of course, Elric comes from lofty heritage, heir to the throne of Melnibone, a monstrous imperial power whose citizens stand on equal terms with gods and demons, where slaughter, enslavement, and torture are given little thought. But he is tormented by conscience and a strange belief in "morality" at odds with the fact that he's literally kept alive by a sword that eats people's souls. He's a defector from his own almost vampiric culture, but he can't -- won't -- rescind the powers he inherits. Over the course of Moorcock's novels, this fundamental tension between morality and sorcerous destiny destroys everything Elric loves.

And yes, yes, I know what you're thinking, and you're right.

But then, the same can be said of any Planeswalker.

I remember reading a fanfic back when I was, oh, twelve or thirteen or so, a fic whose premise was not important beyond one simple thing: the characters in the fic were given the option to choose their species. Every time something in the fic annoyed me, struck me as unjust, frustrated my sense of how the story should go, I thought to myself, "I could fix this if I was there. I know how to make this better."

"Because I would put down my species as 'Planeswalker' and then I'd be a god! Then I could MAKE everything go the way it SHOULD!"

This is the central appeal of Planeswalkers, or Oldwalkers at least. They are primarily interesting either as a power fantasy, or as a power nightmare. Granted, my preteen understanding of the nature of 'walkers or their literary implications was a bit screwy. Planeswalkers underwent some profound power creep over time, to be sure, but for every awe-inspiring act of planar creation, you have Urza almost dying to some robot turtles, or Daria getting bitten in half in a pretty perfunctory way, or Manatarqua showing up for two pages as a piece of architecture then getting fireballed. The practical powers of Oldwalkers were the powers that the plot demanded. You know, like power levels typically are, in fantasy literature.

But I was right, generally speaking, about the scale of Magic's stories. These were stories that spanned not cities or countries but whole existences, and its protagonists traveled these worlds reshaping them in their image. They had the power to reshape their bodies at a whim and cast vast spells and go somewhere else if they wanted to, all appealing to a bullied, neurodivergent, queer kid growing up in rural Pennsylvania during the autocracy, bigotry, willful ignorance, and jingoism of the Bush Administration. I fantasized about Ascending myself and making things right, of reshaping whole worlds "from places of madness and brutality into structured bastions of peace" and magically imposing "countless systems of governance to shape the communal destiny of countless planes."

My deeper misreading of Magic's story was failing to realize that I, the great Planeswalker, would assuredly leave chaos in my wake.

There's plenty of sources for Magic's brand of somewhat morally questionable world-trotting powerhouses besides Elric of Melnibone, of course. As per the traditions of Flavor and Storyline Board Flame Wars, this fact is to be brought up whenever the old debate about whether Oldwalkers are "relatable" or "interesting" enough kicks off.

When it does, the first example to come rattling out of people's keyboards, in my experience, is Doctor Manhattan, Dave Gibbons and Alan Moore's godlike superhero from Watchmen. Doc Manhattan is certainly a good example of an interesting godlike being, but despite the occasional jaunt to Mars he doesn't do a lot of stuff we associate with Planeswalkers. Doctor Manhattan isn't running around using his godlike powers to reshape existence. That's, like, the point, narratively and thematically speaking. He doesn't do anything. (You could fairly respond to this by saying, "No, he does nothing," but I think we can all agree that's way too cheeky to publish).

There's plenty of other examples to pick from, though. Let's stick with comics. Look at Dream and the rest of the Endless from Neil Gaiman's Sandman. They aren't Planeswalkers -- in fact, they're considerably MORE powerful than 'Walkers -- but Dream's casual hopping between realities, his shifting nature, his callous treatment of mere mortalsâ.â.â.â all that scans.

The last bit isn't a new invention of the modern storyline, by the way. Nicol Bolas, Azor, Ugin, Karn, Sorin, and Nahiri may horrify the younger generation of vastly less powerful 'Walkers with the way they treat planets like playthings, their inhabitants simply game pieces (like cards in a deck?) to be summoned and sacrificed at will, but that's not crass revisionism on the part of the current story team. If anything it's one of the most consistent themes through every generation of Magic's story! Arena, Magic's first novel, depicts life on Dominaria as a vicious struggle between domineering magesâ.â.â.â and then reveals, in the climax, that ascending to 'Walkerhood simply extends this struggle to the cosmos, the villainous Planeswalker of the story constantly desperately defending his territorial claim from other such beings. 'Walkers are so destructive to the cosmos in these pre-Weatherlight stories that keeping them locked up or locked out is a regular plot point.

It's no wonder that 'Walkers, like Dream of the Endless, often get a frosty reception. These plane-hopping sorcerous individuals tend to bring catastrophe with them. Still, in the DC universe we might look also to Alan Moore's John Constantine, a wizard modeled on Sting, yes that one, whose closeness to cosmic power tends to result in him losing everything he loves. Or Lucifer Morningstar, who abdicates the throne of Hell in Sandman and wanders off into his own spinoff series by Mike Carey, where he endeavors to create his own universe to play in, behaving largely indifferent to the fates of innocents caught in his machinations.

This is a very small sampling, mind, but it should give you a sense of the heritage these 'walkers are pulling from. What's particularly interesting about this crop of characters is that their creators all were themselves influenced by Moorcock's plane-hopping, doomed, morally ambiguous protagonists, Elric most prominent among them.

I think that's enough to establish a clear chain of influence. These are things after all that loom large in geek culture during the period where the Oldwalkers ran rough over Dominia. (Lucifer conveniently ends right around the time of the Mending.) And there are direct hints -- maybe Sorin is just coincidence, but I doubt Dakkon Blackblade is, and I doubt it's just coincidence that Doctor Jest, the skilled and sadistic royal torturer of Melnibone, shares a name with the torturer Matthew Stover has Nicol Bolas place inside Tezzeret's mind.

Planeswalkers and their problems aren't new. Neither is their appeal. The fact that so many looked at Moorcock's doomed sorcerer king and said, "dang, I need to get ME a cosmic champion who holds a mystic sign!" is testament enough to the fact that there's something to these stories.

Elric's tales have a surprisingly complex set of pleasures, I think. There's at once the horror of the power he wields, not just in the form of his soul-devouring Black Blade, but the power of Melnibone, a conquering, amoral empire, and all the attendant gods and demons and elemental forces who have a vested interest in his fate. Like Muad'Dib envisioning an inescapable cosmic holy war, or Urza spurred on endlessly by the vindictive spirit of Glacian trapped in his crystal eyes, Elric can't escape his destiny, and finds himself rescued by (and in debt to) cosmic forces even if he tries to surrender. Inheriting such power, even for someone trying to establish an idea of morality, is catastrophic, because magic, as the early storyline was eager to remind us, "often masters those who cannot master it" -- and truly vast magic can never be fully mastered.

But isn't it all so exciting? It should sound so morose, but I can't forget, or escape, that frustrated kid reading about Urza Planeswalker for the first time, and imagining how nice it would be to call the tune, tell the worlds how they should dance. Moorcock can write about how tragic Elric's life is all he wants -- when the guy is popping off to another universe to fight some weird monsters at the behest of some demon, or bargaining with ancient elementals while standing on the prow of his land-going ship, it's hard to ignore how dang cool it all is.

I think it's important to understand Magic's storytelling history in the context of this frisson between repulsion and enticement. The Oldwalkers didn't come from nowhere -- they had plenty of literary precursors, leading back, in one strand, to Elric of Melnibone. (There are others.)

In literary terms, then, the Mending, the end of these god-'walkers, should be understood as a break not just with Magic's past, but with a whole strand of fantasy literature, one that, because it happens in the middle of an interconnected setting, can allow the stories to reflect on their own context. That might mean taking the most obvious Elric parallel and sticking him into a wall. For example. We should read this break, and the stories before and after it, in the context of a whole multiverse of multiverses, each with their own Elric under alien skies, poised, inevitably, to screw things up for everyone around them.