No matter how you look at Noah Bradley's illustration for Urza's Ruinous Blast, it just doesn't make much sense. 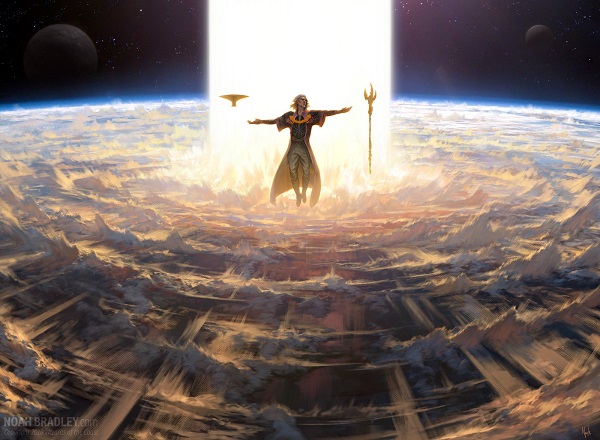 Look at that outfit he's wearing! Don't get me wrong, it's a cool set of robesâ.â.â.â but it's not the RIGHT set of robes. That's what Urza was wearing during the Invasion, not the Brother's War! At that point he was dressed like this, apparently. In fact, Urza wore a bunch of different outfits over the millennia, and even different forms as his oldwalker body changed to fit his mood. In Brother's War art, he was quite old-looking with a full beard, not this Invasion-era trimmed goatee.

His staff looks about right, it seems correct to the periodâ.â.â.â but the Golgothian Sylex looks pretty different in its form than what we get on the card. Most glaringly, he's hovering above the world with Argoth getting blown up in the distance. I'm pretty sure Urza didn't zoom off into space before obliterating a continent!

It's so inaccurate! Like something you'd expect to come out of not a history but, well, a legend.

Dominaria is full of this sort of thing. Last article, for example, we looked at some highly questionable Phyrexian Scriptures. All the Sagas are a bit dubious from a canonical standpoint in one way or another, because they're representations not strictly of the events themselves (some of which exist only in mythology) but how cultures remember those events. Kelly Digges has described The Flame of Keld as a piece of unsubtle propaganda for Radha's faction of reformist Keldons, and other Sagas similarly reflect the politics of their makers. The Sagas are therefore represented by art ofâ.â.â.â other art, diegetic artworks created by Dominarians.

The Legendary Sorceries look more naturalistic in their rendering than the tapestries, engravings, and stained glass of the Sagas, but according to Dominaria's art director Mark Winters they "aren't literal depictions of the characters and scenes." Urza's outfit isn't period-accurate according to other card art we've seen, but it's not really supposed to be. Rather, it's the look for Urza most remembered by Dominarians.

This is an interesting departure from a general trend in Magic art toward greater literalism, the striving for extreme detail, apparent naturalism, and cinematic staging that I've previously called "frodorealism". Magic art, in recent years, has moved strongly toward frodorealism as a way of drawing players into the game world. To pull from Magic's most recent history, outside of Bastien L. Deharme's Axis of Mortality, I struggled to find anything in Ixalan that felt like it reached for the symbolic rather than the literal. 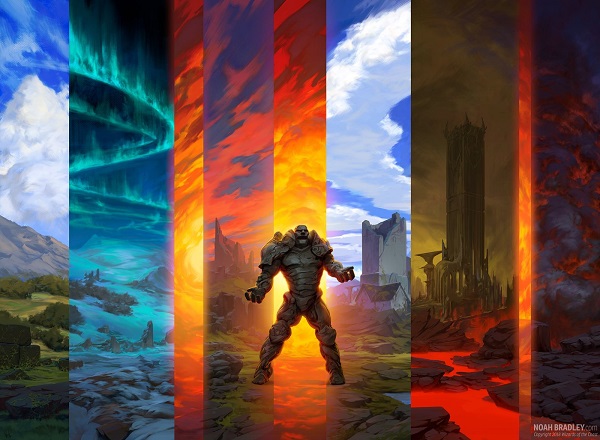 Bradley's works here feel far more like a classical treatment of the fantastic. Fantasy art has always had close kinship with classicism in various ways, and this piece has the feeling of a Baroque mythological and allegorical painting. The figure and his surroundings are rendered naturalistically, but the whole thing feels posed, Urza suspended like a sorrowful, judging god (just remote enough that the viewer might interpret "sorrow" and "judgment" into his expression!) above His Ruinous Blast.

Similarly, the ruin of Tolaria might, I suppose, have looked something sort of like Karn's Temporal Sunderingâ.â.â.â but it's not designed to be a literal visualization but a symbolic representation of Tolaria's ruin. We can see this in the alternate sketch artist Noah Bradley did for the piece, in which Karn stands at the center of a ray burst of different temporal shards. Which of the somewhat abstract, geometric renderings got on the card is more a matter of compositional interest than what literally happened. In fact, the original art description called for Karn to be standing at the epicenter of the explosion, the way he is in the unused sketch. Portraying him instead standing in front of these strips of colored time pushes the piece further into the figural, and makes the piece instantly iconic. As with Urza's Ruinous Blast, the result is a work not just depicting catastrophe and horror but expressing catastrophe and horror for contemplationâ.â.â.â though admittedly I'm not sure how applicable the allegory of "don't overheat the time machine your questionable Planeswalker dad built" is.

These pieces complement the goal Mark Winters had for the set of "how much variety [he] could get into a set" and producing "compelling images" with a variety of styles, most prominently expressed in the Sagas. They bridge the gap between the glorious stylistic variety of those cards and Magic's typical contemporary mode with a kind of almost surrealism, the surrealism of someone like Magritte who puts familiar figures in unfamiliar situations, forcing us to pause and consider what we're seeing. These sorceries draw on Magic's iconic character designs, while still departing from the assumptions of modern Magic art: that what we're seeing on the cards are things we would see in Magic's worlds.

Or, at least, that's true to an extentâ.â.â.â but there's some odd wrinkles to that analysis.

Ixalan, to continue working with that case study of Magic art styles, did have one weird brush with the non-literal, though the sense I get is that it might not have been deliberate at the time. At least some, perhaps most, of Rivals of Ixalan was revealed in Magic Story to be merely a mental construct of Jace Beleren, implanted in Vraska's mind by their mutual agreement so as to deceive her master Nicol Bolas. Many of the events on the cards simply never happened at all. 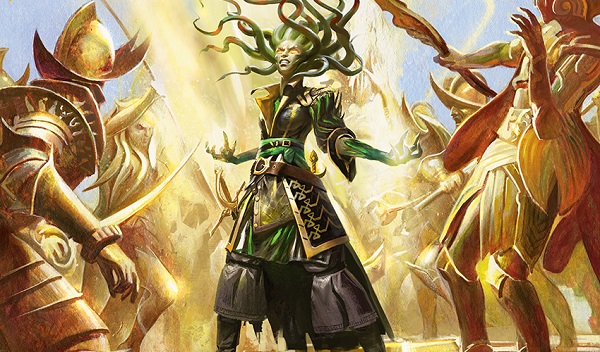 This was a little bit confusing, though. I suspect were Rivals of Ixalan redone, some of the art on these cards would have been differentiated more as not having literally happened. Part of the reason for the styles of the Sagas and Sorceries stemmed from exactly this kind of need to clarify the story. Urza's ahistorical outfit choice helps clarifies for players who they're looking at; the overall staging of the piece helps "keep people from thinking that Freyalize, Urza and Phyrexians were all running around on Dominaria at the same time with Gideon," according to Winters.

So, the elevated, metaphorical nature of the Legendary Sorceries departs from the literalism of Magic's worldâ.â.â.â specifically in order to reinforce its boundaries. The character models here were selected with an eye toward the iconic (Urza's most commonly remembered outfit) and portrayed in ways that would section them off as historical figures, only legends. Breaking with both literalism in narrative canon and in artistic rendering allowed Mark Winters and the creators of Dominaria as a whole to actually make those boundaries stronger.

Those boundaries always remain somewhat fuzzy, though. Winters pointed out to me, in an off-hand way, that "None of the depictions of Urza are actual representations of the character, but rather are impressions of the character in different mediums." Now, he was just talking about the fact that, aside from the sorceries, Urza only appears in statues, stained glass, and so on. Because he's super dead and not coming back. Something about his phrasing caught my attention, though, and I found myself fixating on a profound question:

Aren't ALL depictions of Urza merely impressions of the character in different mediums?

Oh, yeah, yeah, I know it's corny to present something this obvious as some far-out revelation. It's so obvious that it usually goes without saying: we don't have photos of Urza, who isn't real, but only artists' impressions. But here's why getting reminded of that self-evident truth struck me as interesting: Magic hasn't always behaved as though that obvious truth is actually true. As much complaining as storyline fans typically do about canonicity, in art at least Magic has largely striven in the last five or six years to nail canonicity down hard, as though these are not mere images but, as with Byzantine icons, the people of Magic themselves.

But (as I've increasingly found as I return to the primary sources of Magic's historyâ.â.â.â) part of living in a world and engaging with its stories is filtering those stories through imperfect memory and personal impressions. It's exactly that imperfect memory that makes Urza's incorrect costume choice so useful, drawing on the ideal sense players have of Urza instead of the way less recognizable Urza of, uh, that one card from Urza's Saga. It's familiar, but it's also just a little unfamiliar; remembered, but in an idealized form.

What the legendary sorceries show is that fantastic styles that deviate from frodorealism also can be used to put players in a world with all its inexact, muddled impressions. Urza's Ruinous Blast is just as much a part of the world of Magic as any naturalistic portrait of a Serran cleric or Cabal knight. It represents the world as understood through memory, through culture, through history and dogma and the mind of the individual reader who picks up Kayla Bin-Kroog's Antiquity War. This art is always going to be speculative realism at best, and the legendary sorceries simply put a layer of metatextuality onto that speculation: speculating not just about the state of the world but speculating about the way people within that world might speculate about their own world's past.