Login
0 Item
Advanced Search
Sign In
Create Account
Oh Gideon, poor Gideon, why do these things keep happening to you?

Last week Gideon had a rather nasty shock when it turned out that (as his fellow Gatewatch members had already discovered) life on Amonkhet is kind of a horror show. At the behest of Okhetra, the White-aligned goddess of solidarity and unity that Gideon immediately sort of imprinted on, Gideon joined one of Amonkhet's many crops for the Trial of Ambition. He then watched as the unity of the crop revealed its dark mirror: a cold, calculating willingness to sacrifice and cull most of the crop for the sake of a few of its members progressing through the challenge.

This is a pretty important moment in the story, or at least WotC seems to think so. After all, they gave it not one but TWO story spotlight cards, with Gideon's overall arc taking up two more of the five! While the previous story spotlights were a bit, uh, scattered in what they covered, this set's cards do come together as a clear narrative, one where Gideon finds a Renewed Faith, only to be horribly disillusioned when the authority he follows turns out to be less than perfect. And by less than perfect I guess I mean powered by the souls of brainwashed children?

The interesting thing, though, is that this isn't really a new arc for Gideon. Gideon's character seems to be built entirely around following orders from a White-aligned authority figure, becoming disillusioned with them, and determining his own pathâ.â.â.â until he finds another White-aligned authority figure to take orders from, and so on and so on. Gideon's earliest appearance follows this arc, his integration into canon hinges on retreading similar ground, his retconned origin adds another loop in, and now Gideon's doing the same song and dance on Amonkhet too. What gives?

Well, I think there's two answers to that, or at least two general trends in answeryness that we could look at. We could tip in the direction of saying that this adds up to a unified, continuous narrative for Gideonâ.â.â.â or, we could, well, NOT do that, and look at the reasons WHY this narrative might keep repeating itself.

Fandom has provided us with two terms that I think might help explain these two trends. Those terms are "Watsonian" and "Doylist," named after the two possible authors of the Sherlock Holmes stories: the fictional John Watson, or the real Arthur Conan Doyle.

Now, I don't tend to rely on these frames a lot, because they really reduce your critical space down to two possibilities: the text should be treated as actually happening, or it should be treated as all coming from the intentions of its authors. This leaves out the possibility of analyzing thematic or symbolic content that doesn't really make sense in-world, but might also be unintentional on the part of the author.

But sometimes having this in hand can be pretty useful, particularly when we're talking about a storyline which spans decades written by a whole bunch of different people for a card game. I also think there's some inroads into more complex lit critâ.â.â.â but we'll get to that.

The really big thing I'm interested in is the parallel between Gideon now and Gideon's first appearance. See, I think we can draw a line between the current story and Gideon's first story in the same way we can draw a line between Chandra's introduction and her arc during Kaladesh. Not coincidentally, they have their start in the same book: Laura Resnick's The Purifying Fire. 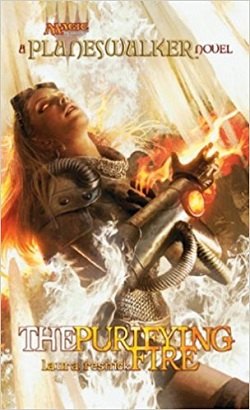 In TPF, Gideon is introduced as a foil to Chandra, and a potential love interest. That's the Doylist take â his character is there to serve a purpose of contrasting with Chandra's arc of rebellion and redemption. Let's look at it from the Watson side of things though. Gideon is introduced as a controlled, collected White mana user who Chandra initially thinks is working for the Sanctum of Stars on Kephalai (which she steals from and then blows up because, well, this is Chandra we're talking about) but who turns out to be an agent of Walbert and the Order of Heliud back on Chandra's plane of residence.

There's an ambiguity to Gideon's character throughout the narrative. He strongly criticizes Chandra's recklessness and violence, but at the same time he doesn't feel it necessary to avenge the Sanctum (which he has no stake in) and after spending time with Chandra he increasingly becomes ambivalent to Walbert's command. When he finds out that Chandra is not to be executed but fed to the Purifying Fire as an example, stripped of her connection to Red mana, he stands passively as she nearly strangles Walbert in a rage. (After other Order members subdue her, Walbert demands an explanation for Gideon's passivity. Gideon shrugs and says simply, "You have guards.") And, of course, it is ultimately Gideon that gives Chandra the knowledge needed to commune with the Fire: the understanding that she must enter it with a full acceptance and knowledge of her crimes.

Of course, he comes to regret that somewhat when Chandra blows up the Order at the Purifying Fire's behest.

The Purifying Fire seems to have a thematic focus on balance. Ouphes may be recklessly vengeful, the beast summoning battles of the great wood tribes may be destructive, and the pyromancy of Keral Keep may be a threat to order, but the order of mana as a whole supersedes the regimented order of White mana specifically. The Fire itself seems more concerned, even as a White mana entity, with the broader order of the five colors than the Order of Heliud.

To understand Gideon's place within that narrative we kind of have to jump outside the Watsonian/Doylist mode, or maybe blend the two frameworks together. We can look at a text and assume that it is a coherent, complete statement â and that's sort of Watsonian, the view that we can derive a coherent world from the story â but also recognize that certain narrative elements convey certain information about what statement the story's making â which is kind of Doylist, the notion that we can understand WHY a story is told a certain way.

So let's take this insight back into our in-world analysis of who Gideon is. Gideon tries to navigate the complexity of this balance, the contradictory pull of the fact that White does not make right, but that maybe the balance on Regatha isn't going to be good or nice or peaceful or stable the way he wishes, and that resetting that balance, as Chandra does, might result in the Order of Heliud getting blown up by a supercharged pyromancer. Gideon has seen the destructive potential of someone like Chandra, on Regatha and on Kephalai, then seen a world consumed by imbalance in the form of a powerful Black spell, then seen the authoritarian order and cold cruelty of Walbert, his ostensible White mana ally, and THEN seen an actual manifestation of White mana enable the destruction of the Order of Heliud.

Gideon spends much of the book assured and capable of carefully and rationally (if a bit obnoxiously so) explaining the logic he sees behind the Order's actions, without ever slipping into becoming a kind of caricatured paladin, but the very collectedness that sees him act cautiously around Chandra also belies the ambivalence that ultimately sees him betray Walbert to help Chandra. Gideon has a desire to be on the Right Side and be a part of an order, a hierarchy, that leads to the peace and stability he values, paired with too much intelligence to ever follow as blindly as he might like to.

Gideon is a man in search of someone to take orders from, incapable of following blindly. This is the central conflict of his character.

It's interesting, then, that just this week we got a story featuring a Blue-aligned character not unlike Gideon, the aven boy Nekht, friend to Samut and Djeru, a character caught between belief and skepticism. After Nekht is killed by a wasteland horror, "from the seeds of [Samut and Djeru's] pain," author Michael Yichao writes, "divergent thoughts and questions grew, bearing vastly different fruit." Samut finds herself driven to learn the truth of her world. Djeru throws himself into fervent devotion to the Gods.

In a sense, Samut and Djeru represent the two warring halves of Gideon's personality: the need to believe, and the need to see truthfully. They can help us understand Gideon's character and why he found himself so drawn to the Gods despite the warnings of the rest of the Gatewatch. He's not, after all, wrong. Oketra at least does seem to genuinely care for her people. But Gideon also wants to see things for himself, and I think there's a level of self-deceit in his decision to join the Trials. After all, what better way to see the truth of the plane than to go through the most important ceremony of its inhabitants?

I think that if we're looking for consistency in Gideon's character actions they lie with the fact that he can here convince himself, as he has before, that he's carrying out instructions from a higher powerâ.â.â.â even as his underlying motivation is to get at the truth of that power. Joining the Trials serves both his conscious, avowed desires, and his unconscious, repressed skepticism. It's not surprising that this kind of thing keeps happening to him, from that Watsonian perspective that gives us insight into his personality.

The guy just can't help himself.

Of course, that's assuming there is a person named "Gideon" that we can have insight into. If we zoom out from these story segments â The Purifying Fire and the Amonkhet storyline â the picture becomes a lot more complicated, and it becomes harder to ignore the rough, strange history of Magic's storyline's production over the last decade. And that's where we'll be picking things back up next time.