These weird cats are notable for having three pairs of legs rather than the somewhat more typical two. They are typically horse-sized, large enough both for human riders and to make humans their prey. Their ears are pointed and typically curl back toward the head, creating an almost horned appearance. While all clearly related, there seem to be several major breeds of weird cat. Two varieties - one striped and one uniform in its fur coloration - are bright orange, with the striped breed sporting deep red patches. Another more dramatic variety has dominantly blue fur with green stripes or patches. There are apparently even pure white breeds, though these seem less common, and there is some variation between individuals in the fluffiness vs sleekness of fur, exact hues of fur, and so on. These are the Jhovalls, weird cats found only so far on the strange plane of Mercadia. They seem to be, even on Mercadia, an invasive species, perhaps native to Mercadia's inverted mountain and driven down into Deepwood, perhaps imported by Mercadia City or Saprazza from another place entirely. 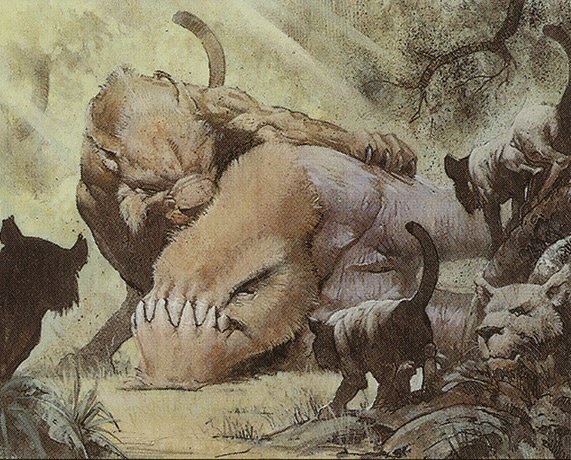 I love that I can identify and study these weird cats. I came into Magic in kind of the golden age of this kind of weirdness, with a whole range from Rath to Mercadia to Invasion Dominaria to Otaria to Mirrodin to Kamigawa providing a bevy of bizarre monster designs. Moreover, planes like Mercadia, for all that they were deeply strange, were also surprisingly strongly unified: look at how MANY of these weird cats there are! The style guide of the time apparently could unify the concept of "Jhovall" enough to have them appear on 11 different cards in a single set, while being flexible enough to accommodate significant variation in both monster design and artistic style.

These weird cats are an example of a kind of speculative naturalism that I've always loved, and their number and variety make for an interesting puzzle for Vorthosi. I'm the one that put the Jhovall tag together on Scryfall's art tagger system, and doing so required some close attention and cross referencing to make sense of what I was seeing. At some point it required me to make some naturalist judgment calls. Nothing explicitly pegs the blue and green variety of Jhovall as, in fact, a breed of Jhovall! All the cards named "Jhovall" or mentioning Jhovalls in their flavor text depict the orange and red or pure orange varieties.

So, I looked at morphology. Muzzle shapes tend to be kind of variant, with some ranging almost more canine than feline, but the ears of Jhovalls pretty consistently have that curl upward. That made me pretty confident. And there were enough blue-green "Jhovalls" with feline looking muzzles that I felt comfortable writing some of the more wolf-like shapes off as just a random variant.

Oh, and of course there's the whole "six legs" thing. That's pretty distinct too, and the blue-green "Jhovalls" have got them, so that feels pretty much like an open and shut case to me.

Mercadia's a good plane for this sort of let's-play-naturalist game. Like, Bifurcate shows a Satyr. Really. I know it doesn't look anything like a satyr, and in fact I think someone's probably already challenged my "satyr" tag, but check out Lumbering Satyr. Same hairless, diseased looking body, same oversize claws, same lipless teeth, same lack of ears, same lifeless eyes, black eyes, like a doll's eyes...

But they're also really interesting and cool and fun satyrs. Even on cards where they're not specifically named as such, their distinctly unsettling features (what's going on with those weird hole-filled lumps on their back? actually nevermind I don't want to know) make it possible to link them together. This game of connections and speculation might not be the primary game of Magic, but on long afternoons sitting at home with my slowly developing card collection it's a game I played pretty often.

The development of a tool like Scryfall makes this game a lot easier to play, with its larger art scans and more powerful searching tools. It's never been easier to play Magic naturalist, and the connected nature of Scryfall means that it's a game that can happen more publicly than ever before. If I identify some weird cats, I can immediately share these weird cats with the world, and take pride at how good I am playing THIS game, even if in normal Magic I'm a real scrub.

It's nice that we can look at these weird cats together, although I do have mixed feelings about the processes that make that possible.

I tagged all these weird cats in Scryfall's tagger. That was labor. I didn't get paid to do that, though I'm getting paid to write this article now. That labor provided a resource that I suspect rather strongly WotC wouldn't create on their own, which might be used by them in the future. This kind of fan-labor is not a problem in itself, but it can lead to some complicated relationships between fandom and corporate rights holders. Too often in modern fandom companies assume fans will do this kind of work (judging, promotion and hype raising, professional and monetizable play, categorization and cataloging) for free, to company specifications.

My academic background is all over the place but I have enough of a claw in the art world to have Thoughts about curation. Curation, like criticism, feels like an artform to me. An exhibition, especially an art show in meatspace, will have a narrative to it. So will the playlist a fan creates for their favorite ship. Like collage or mashup, it's an art form made up of stuff that already exists.

The implications of this often get lost in discourse about fandom toxicity. Sam Sykes infamously laid this out something like stages of radicalization or infection:

This implies that fan ownership or control is a dangerous delusion though, rather than, like, literally just how curation and fan labor (and arguably even reading) work. The alternative modes of engagement seem to be: redefine fan creative production as valid only if it furthers the Brand (i.e. exploitation), or redefine fannish activity as only buying stuff (i.e. soul-deadening). If we don't want to do either of those things, we might have to accept that fan practices have content as well as form.

I don't think I own or control these weird cats in the sense that I can make demands of their creators. That'd require real power that I neither have nor frankly want. And I only "own" this curated exhibition of weird cats to the extent that no one else has found extra Jhovalls to toss in here, or decided my blue-green Jhovalls are in fact a separate species and untagged them. Fannish ownerships and claims of control are inherently partial, conditional, temporal, contested, and dynamic. Nevertheless, this curation is still labor I've done to provide a resource that did not exist before, just as Scryfall's developers provide labor scanning cards and creating useful tools.

As companies continue to cash in on fan labor - hype building exercises, the precarious labor of game streaming, volunteered time, and curation-for-sale of products that really should be curated by someone actually employed by the company - I think more tensions will emerge between fans and copyright holding companies. I don't think that the incidents linked above will be the last time individual fans decide, in one way or another, to walk off the factory floor. In a context where the wealth, power, and reach of corporations far outstrips the power of an individual fan, and threats of cease and desist orders loom over any fan project no matter how beneficial, it may be easier to simply walk away.

Look at these weird cats again!

Or any other of Magic's weird beasts. There's plenty of them and selecting these particular weird cats was pretty arbitrary on my part. You can do a lot of the same things - spin off into a variety of different topics, I mean - with any number of other odd little categories of card in Magic.

Magic is an incredible object of study because there's so dang much of it, over such a long period of time, and its continued popularity means that there's many tools like Scryfall that make study significantly easier. There's really nothing else quiet like it.

This is the flip side of the doom and gloom about fan labor. If the boundaries between play and labor blur in ways that might be exploitative, they also blur in ways that might be productive far beyond the confines of Magic as a fandom and product. If playing at being a Magic naturalist feeds back into Magic's production in the same way that meticulous documentation of Star Trek fed into the production of contemporary Star Trek scripts, that's a good reason to produce Magic products that encourage such behaviors, and let projects like Scryfall continue unhindered. Moreover, such play has implications for broader questions of how speculative fiction is constructed and what it offers to the reader-player. Participating in the study of weird cats means also exposing the way that participation works, what makes it pleasurable, how other creative (or academic) projects might build on it.

What do you see?