You pull your Escape Velocity out from under your Rubblebelt Maaka and hand it to him. "I have to say that it's interesting," you admit. "I'm not really making the most of it, but then again, this deck isn't built to make the most of it."

"Yeah, well, this thing didn't turn out so well for both of us."

"You're telling me," you say. "I'm playing a bunch of terrible artifacts just so that I can get Rusted Relic working."

You're not exaggerating - the Escape Velocity happens to be the best part of a terrible booster draft today. Your

deck doesn't have much strategy or removal beyond the little bits and pieces you've tried to string together: There's a minor artifact theme in there somewhere, and a couple of cards that are built around enchantments, but nothing that speaks to any sort of consistency.

That said, inconsistency is probably the name of the game for your local store's Unabridged Cube, a collection of one of each card ever printed. You've been coming in for regular events with the Cube for, well... a long time now, and you've seen more than a few dubious decks.

That's not to say that the Unabridged Cube doesn't have surprises, though. One of its odd habits is that it produces cards that haven't gone into circulation yet. You don't know where these cards are coming from or who's adding them to the Cube, but it's made your local game store popular every few months.

"I'll use Ob Nixilis Reignited to draw a card," Kenan says, adding a loyalty counter to his planeswalker.

You sigh. "That puts you at, what? Nineteen life?"

"Hey, you can't get through a game without some life loss," Kenan laughs. "I might have done that prematurely, though."

Kenan taps three Swamps and casts a Lost Legion. "I should have gotten this onto the battlefield first," he clarifies, checking the top two cards of his library. "Good thing I didn't draw a land."

"An Enclave Elite," he says, playing just that. "I have just enough mana available to kick it for three, so I'll tap out."

You nod. That doesn't exactly leave you with a lot of confidence in your ability to win this game, but at least you know that Kenan isn't holding onto any countermagic.

"Did I attack already?" Kenan asks, glancing at his board. "No I didn't," he says, before you can answer.

"I'm hating the hexproof on that thing," you say.

"You wouldn't have had the removal to off it, anyway," Kenan says. "Your Brion Stoutarm doesn't even get online until your next turn."

"Speaking of which, is it my turn now?"

You untap your permanents and take your draw, pulling a Together Forever from the top of your library. It's obvious that you have a really motley mix of cards today, although you're not going to go down as easy as Kenan may think. In fact - you have a feeling that this game is going to end in your favor very soon, although you're not quite sure how.

It is the start of your first main phase. Defeat Kenan before the beginning of his next combat phase. 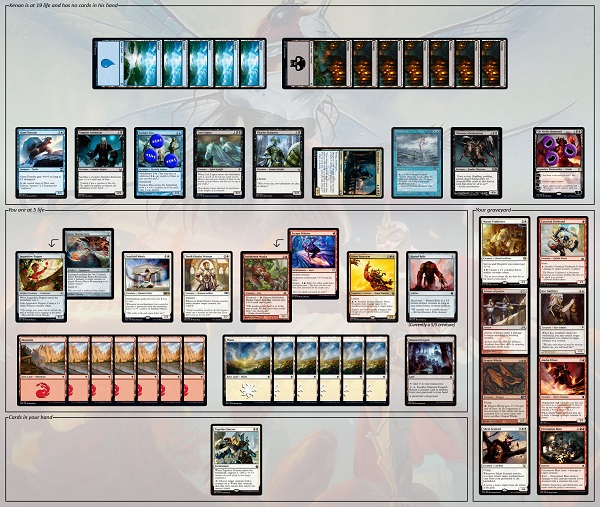 Kenan is at 19 life and has no cards in his hand. He has the following cards in play:

If you think you've got a great solution in mind, don't put it in the comments! Instead, send it to puzzles at gatheringmagic dot com with the subject line "Puzzle - 36,700 Feet per Second" by 11:59 P.M. EST on Monday, January 13, 2020. We'll include the best ones in next week's article along with the next puzzle!

"Winning while only casting a single spell would be tricky on some boards," Addison Fox writes, "but as it turns out we have a TON of activated and triggered abilities relevant to the board state which let us power through this Eidolon of Rhetoric without a lot of trouble. We get other spells besides our draw for the turn in our hand at various points, but who needs them? Well, as it turns out, we do, but not to cast."

Michael Feldman's solution is particularly interesting here, clearing the table as much as possible with Infected Vermin and then making the most of Wasteland Viper:

There are a number of variants to this solution. You could, for example, have Broken Fall regenerate Infected Vermin instead. This gets you only one use out of Undertaker (which you use to return and channel the Shinen), but allows you to clear all but one blocker with an additional Vermin activation.

The potential to clear all blockers brings up an alternative solution. "Infected Vermin is key," Jacob Butcher writes, "because its ability to damage creatures and players both directly damages Shay and kills/damages all possible blockers:

"I struggled with this one for a while until I realized it was feasible to wipe the opponent's board with Infected Vermin," Sevi Alvarez writes. "This puzzle is secretly about how to achieve Threshold and exploit the diseased rodent without giving up too much board presence: