Login
0 Item
Advanced Search
Sign In
Create Account
So far in this booster draft tournament, Shay is the only one among all your opponents who hasn't taken a second look at your Ironscale Hydra. That, in itself, should have been a warning sign.

The presence of the Hydra in your deck is already interesting, especially considering that it hasn't been officially released yet. However, your local game store's Unabridged Cube tends to come up with preview cards like this: No one's sure who's putting them into the Cube (or how they're getting the new cards at all), but you don't mind taking them out for a spin whenever you have the chance.

And that's why you're staring down the barrel of dual Serra Angels right now - one from Tenth Edition, and one from Dominaria.

"You're telling me," Shay says. "I almost had three of them, actually."

"I had a Fourth Edition version show up in the first pack I opened. But I picked an Umezawa's Jitte over that. The first Angel didn't table, of course."

"Yeah, you attacked me with the first Angel before you cast your second one."

You raise an eyebrow. "What, no counterspell bluff?"

"I'm going to end it with the Angels next turn, and the Eidolon already brings you down to one spell," Shay says. "I would be very surprised if you found a way to stop that."

You beg to differ, of course, but saying something at this point would be premature. "Okay," you say, "point taken. Does this mean that you're ending your turn?"

You untap, take your draw, and add a Nature's Way to your hand. That gives you a good chance to take down one of your opponent's two flyers, but you still have no way to deal with the other one. And between Shay's Crawlspace and Eidolon of Rhetoric, your options are more than a little limited.

"You don't have any more cards in hand, right?" you ask.

"And nothing I can activate," Shay adds. "Why? Are you planning something?"

"To tell the truth, I don't know," you mumble. "The only thing I can say for sure is that this might be a little close."

It is the start of your first main phase. Defeat Shay before the beginning of her next combat phase. 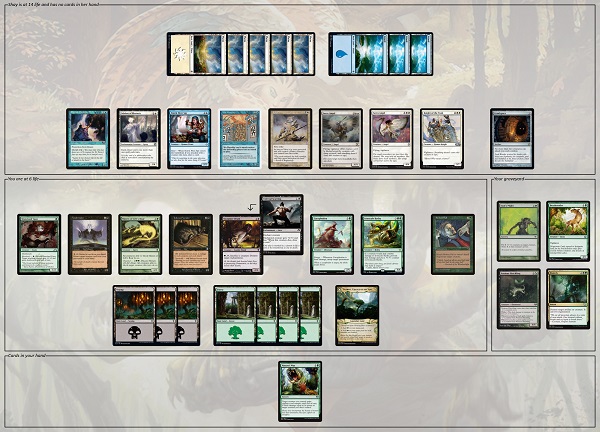 Shay is at 14 life and has no cards in her hand. She has the following cards in play:

If you think you've got a great solution in mind, don't put it in the comments! Instead, send it to puzzles@gatheringmagic.com with the subject line "Puzzle - By the Skin of its Teeth" by 11:59 P.M. EST on Monday, January 6, 2020. We'll include the best ones in next week's article along with the next puzzle!

"The solution is mostly to use Bloodletter's ridiculously-triggered ability twice via Unhallowed Pact," Jacob Butcher writes. "The subtle part, however, is ensuring that neither a Thopter token nor a Saproling token is left behind as blocker."

"The first key to this puzzle," Sevi Alvarez continues, "is realizing that for creature tokens which aren't given specific names, their creature type is their name. Once you figure that out, the puzzle becomes a sticky maze of stack manipulation."

The solution here involves moving around the Healer's Headdress for its ability and toughness bonus, then allowing your Loxodon Convert to attack unimpeded. "After all," Addison Fox writes, "it wouldn't be Christmas if we didn't have a puzzle involving an exchange of gifts, a white elephant, and someone getting punched in the mouth:

"What I initially took for a fun puzzle of mediocre difficulty," Michael Feldman notes, "I gained new respect for as I neared what I thought was a solution. At first I thought we had more than enough mana to bounce around the Healer's Headdress and protect Loxodon Convert. Then I realized that Overgrown Armasaur also needed late-sequence protecting, lest a final Saproling token spoil the party after we otherwise cleared the board. That really narrows down who can wear the Headdress and when. It also makes essential both Healer's Headdress's instant-attachment ability as well as the actual use of the Treasures we get."

Overgrown Armasaur, Filigree Crawler, and Festering Goblin all trigger. Our opponent creates both a Saproling token and a Thopter token. Use Festering Goblin's death trigger to hit Armasaur so that it dies.

"Despite the extra alliteration provided by the Treasure and Thopter tokens," Jacob writes, "you can ignore them and trigger the Bloodletter's ability by the same initial card triplet twice in quick succession. This allows Festering Goblin's ability to kill off the Armasaur and avoid a final inconvenient Saproling."

"'Un-' cards make for uniquely entertaining puzzles," Michael adds. "Why else would we be keeping track of something so seemingly arbitrary as the first letter of each permanent name?"