Login
0 Item
Advanced Search
Sign In
Create Account
Several turns after the Merciless Eviction that wiped out most of your army, you're struggling to claw your way back into your game. While your deck has come up with several creatures to hold the line, none of them are on par with the superior ground forces that are now languishing in your exile zone.

On the other hand, your opponent, Lukas, got slightly mana-flooded after his Eviction resolved. This put him in defensive mode for a while, forcing him to play some blockers and give you some time to recover. The problem is that Lukas has since managed to solidify his position with two Extort creatures, and now you fear for your life total whenever he so much as casts a spell.

Things got slightly worse for you when your Bloodfray Giant became the target of a Grisly Spectacle, followed up by your Ogre Slumlord getting sentenced to One Thousand Lashes. This has left Catacomb Slug as the sole creature on your side that's able to attack with impunity... and when your hopes are hanging on a vanilla 2/6, you know you're in trouble.

All in all, this feels normal for a throwback draft. Your local game store is currently holding the second of two such events before Ravnica Allegiance hits, and today you're playing Return to Ravnica block. You're also probably failing at doing so... but hey, nobody's perfect.

Lukas taps his Kingpin's Pet and pushes it forward. "I will attack with this," he says.

That doesn't come as a surprise. "It's not as though I've got any flying blockers," you admit.

"So you will be taking the damage?"

"I'll blow up my Dimir Cluestone for a card first," you say, dropping the artifact into your graveyard. You add a Midnight Recovery to the Bioshift in your hand, then turn back to Lukas."I'll go to 9 life," you note.

"Second main phase," Lukas says. "I will cast Desecration Demon and extort you twice? This will make me 10 life."

Lukas smiles, makes a flourish, and leans back. "It is now your turn," he announces.

That's unfortunate. Not only does your opponent now have two flyers on the table, but he stands a good chance of bleeding you to death! If you're ever going to draw something good, you'd better do it soon.

Unfortunately, after you untap your permanents and mark yourself down for One Thousand Lashes' life loss, all you get is a Weapon Surge. That would be nice if Lukas were doing all-out attacks, but considering that he's willing to sit back and hit you with extort and evasion, its use might be limited at the moment.

Still, if you have only one shot at something, you might as well take it. But what could you do this turn that might have some impact on this game?

It is the start of your first main phase. Defeat Lukas before the beginning of his next combat phase. 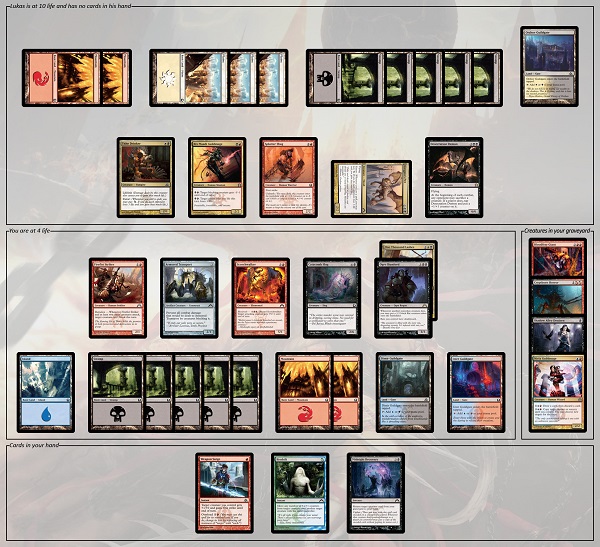 You have the following creature cards in your graveyard:

Lukas is at 10 life and has no cards in his hand. He has the following cards in play:

If you think you've got a great solution in mind, don't put it in the comments! Instead, send it to puzzles@gatheringmagic. com with the subject line "Puzzle - Then Make a Way" by 11:59 P.M. EST on Monday, January 14, 2018. Sean's on vacation right now, so the solution to this puzzle will be posted in a couple of weeks once he gets back!

Because Sean is currently on vacation, this section is empty at the moment. We'll update this in mid-January with the solution to the previous puzzle!