"I would," you tell her, "but you know that's not true. How were we supposed to know that they weren't playing Cube draft today?"

"The least he could have done was to tell us," Mari says.

"Well... technically he did," you admit. "He told us shortly after we arrived, an hour before we started, but... he did tell us."

"And we were looking for a good tournament, too."

"We both found what we were looking for, at least."

"Not like this," Mari says. "I mean, I'm playing a really bad Rat deck, and you're playing an even worse Horse deck... and we're sitting among the worst decks today."

Piper sighs. "Sometimes you feel you're not wanted anywhere," she says. "This is apparently one of those times."

"Yes please," you say. "Maybe you'll actually get our first win in the twelve games we've played so far between us."

"CJ," Mari says to no one in particular, "If you ever look behind and don't like what you find, that's probably me about to smack your head really hard."

"I mean," Mari continues, "how hard was it to just put together thirty Relentless Rats and four Thrumming Stones? I would even have been happy with a deck that had two hundred Plague Rats... wait, scratch that last part."

"I'm returning that Pontiff of Blight you made me discard earlier, and I'm drawing a card," Piper says.

"Well, CJ, there's something you should know," Mari continues. "You've got a place to go, and it's on my bad list."

"I'm playing a land and tapping out to cast Pontiff of Blight," Piper says.

"Or you could have just told me when you found out about this creature feature tournament three days ago, CJ. Never mind the fact that we hang out with each other..."

Piper turns her Apostle of Purifying Light sideways. "How can you stand this?" she asks you.

"I mean, this," Piper says, gesturing toward Mari, who's still grumbling to herself.

"I don't listen to a word they say," you answer, smiling. "Sometimes that's easier."

"You might want to let your friend know that she's taking two damage, then," Piper notes.

"I know I'm taking two damage," Mari says, her attention snapping back to the table. "That's five life for me now. Anything else?"

Mari continues muttering as she untaps her permanents. Her draw, a Call to the Netherworld, would be useful if she was in any circumstances other than this one. Unfortunately, with an empty graveyard thanks to the Apostle, it'll probably do nothing but make her more frustrated.

"I think that that might be enough Magic for today," you say, slowly.

"You might as well let me finish this game," Mari says.

"Because I think I'm about to win it."

It is the start of your first main phase. Defeat Piper before the beginning of her next combat phase. 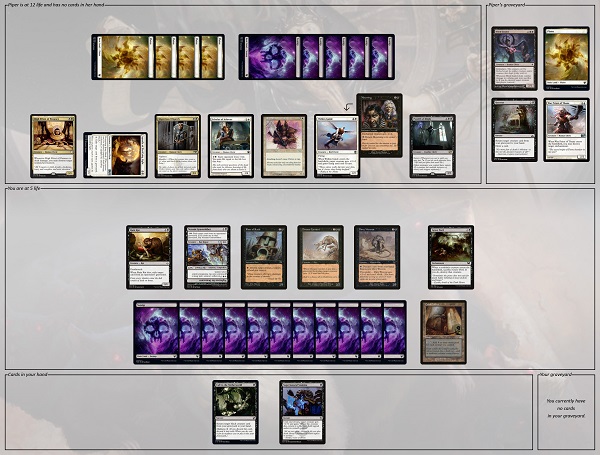 You currently have no cards in your graveyard.

Piper is at 12 life and has no cards in her hand. She has the following cards in play:

Piper has the following cards in her graveyard:

Instead, if you think you've got a great solution, you can send your solution to puzzles@gatheringmagic.com with the subject line "Puzzle - Rats!" by 11:59 P.M. EST on Monday, February 17, 2020. We'll include the best ones in next week's article along with the next puzzle!

Most solutions to this puzzle were submitted late, and the number of available plays may have been a factor. "The Evolution Charm / Rhox Faithmender / Tears of Valakut play was especially hard to spot," Michael Feldman writes, "with Hover Barrier (appropriately to its creature type) playing both smoke and mirrors to that play as well as a real challenge of the puzzle requiring two fights."

"I stared at this one awhile before I started trying to solve it," Sean Patrick Keatley continues. "The best giveaway was that we only have access to eight mana, so we are severely limited as far as recursion and other stuff. Once I realized that, the path became more clear:

"You've gotta love the graveyard full of potential cards to manipulate all proving to be red herrings (or you can hate it with a passion - such is art, no?)," Michael adds. "Perhaps the message of this puzzle is that brute strength must be tamed for artistic power to shine... or that the power of art is best used to inspire further growth and productivity, regardless of whether the artwork itself reaches its intended audience.

"Besides that, you know a silver-bordered card is in the house when the puzzle notes the illustrator of each of your cards!"