"You're attacking into my Seraph of the Sword and my Mistmoon Griffin," you point out. "That means that you've got a trick of some sort."

Your opponent's expression doesn't change. "You could block it and find out," she notes.

You sigh. You're sitting at a mere two life, so you don't have a lot of choice here. Blocking the Specter with your Mistmoon Griffin or letting it through doesn't look too good, seeing that something as simple as a Kindled Fury would spell the death of you.

On the other hand, you could block with your Seraph of the Sword - that would blank any of Trinity's enhancement effects. If Trinity had any direct damage, you reason, then she would probably have killed the Seraph already. And once she untaps her Glorybringer next turn, the Seraph's probably going to be its next target anyway.

You position your Seraph in front of the Specter. "That's my block," you say.

"At least that answers the question," you say unhappily, dropping the Seraph into your graveyard.

"We're playing the Unabridged Cube," Trinity says. "You should be expecting strange things from a box that has one of each card ever printed. I had a 4/4 first strike creature on the board the other day, and I was playing

"I know, I play this a lot too," you say. "But that doesn't mean that I can anticipate, like, twenty thousand different cards."

You look on mournfully as she fishes around in her deck box for two Zombie tokens. Your two life is looking extremely tiny now, especially compared to her twelve.

Part of the issue, really, lies in your deck choices. Right now you've got an Unsanctioned card stuck in your hand - an Infernius Spawnington III, Esq. - which only happens to be there because you wanted to give it a test run. You haven't even managed to get close to eleven lands so far, and your Demon Beast Grandchild is looking a lot more like a White Elephant.

"About whether or not you can still win?"

"I didn't say that," you note, untapping your lands.

"You've got a reputation for finding it," Trinity says. "I hear things."

"You hear what things?"

"I don't know what you're talking about," you say, drawing a Gruesome Deformity.

"We're heading to Game 2 regardless," Trinity says. "So if you have something in mind, you can just take a shot at it now and worry about things later. Show your presence, or something."

It is the start of your first main phase. Defeat Trinity before the beginning of her next combat phase. 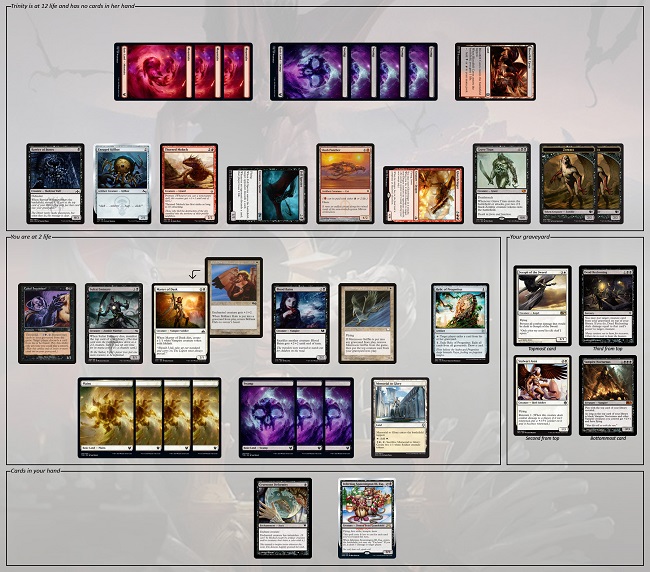 Trinity is at 12 life and has no cards in her hand. She has the following cards in play:

Trinity has no relevant cards in her graveyard.

Instead, if you think you've got a great solution, you can send your solution to puzzles@gatheringmagic.com with the subject line "Puzzle - All Shall Be Revealed" by 11:59 P.M. EST on Monday, March 2, 2020. We'll include the best ones in next week's article along with the next puzzle!

"This was an absolutely beautiful puzzle that fits together like a Rube Goldberg machine," Jonah Comstock notes. "I especially liked that the solution uses every single card on our side of the board!"

"Since our opponent is at 12 life," Sean Patrick Keatley writes, "and I knew the Old Fogey had to be one of the ones to get through, I knew I had to deal 5 more damage. One of the other flyers would be 3 of that, so that left 2 damage. That meant giving my Ranging Raptors flying. Since I can only give one thing flying, I knew I had to sneak the Fogey through with its Snow-Covered Plainswalk ability, and the rest kind of solved itself."

The problem, of course, is that Vern doesn't have a Snow-Covered Plains on his side of the table. But that's the main point to Hyman Rosen's solution:

Note that even though you can bounce your Evolution Sage with Wirewood Symbiote instead of the Branchbender, it won't work with this sequence: Your Lys Alana Bowmaster triggers when you cast an Elf spell - and not when the Elf enters the battlefield - so you'd end up in a situation where Ranging Raptors puts a land into play before the Evolution Sage resolves.

Because you're attacking with both the Old Fogey and Ranging Raptors, though, you could use the Fogey's "Bands with other Dinosaurs" ability to declare that they're attacking as a band. This, however, has no impact on the solution, other than using an obscure keyword ability (and opening the door to further headaches).

Funnily enough, the real hero here isn't either of your Dinosaurs, Elves or Wizards: "That Snow-Covered Island is definitely the hardest working card in this puzzle!" Jacob Butcher remarks.