The way you see it, it's possible that your opponent, Raquel, is taking a very subtle approach to your match: Making significant moves you can't see, setting up plays to take advantage of the long game, and baiting you with nonexistent threats.

On the other hand, it's also possible that you're overthinking things, and Raquel really has no idea what she's doing.

You're spending another weekend playing your local game store's Unabridged Cube, a special collection that contains one of each card ever printed. While there's a small group of regulars (including you) who try to draft it every chance they get, you still run into "new" players like Raquel. And if there's anything you've learned about some of these new players, it's that they're about as unpredictable as the next expansion set's deck archetypes.

Raquel motions toward her tapped Shriek Raptor, and you give her a suspicious look. "How many cards do you have in your hand?" you ask.

"I'll block your Shriek Raptor with my Demanding Dragon," you say.

You pause. "You don't have the Might of Oaks?"

"What do you mean?" she asks. "I drew a Hidden Predators."

You drum your fingers on the table. At least you have some small comfort, knowing that you didn't have a lot of choice in the matter: Your Goblin Skycutter wouldn't have been able to take down the Raptor by itself, and your Heavy Ballista still needs to stave off summoning sickness.

Raquel casts her Hidden Predators and ends her turn. You untap and draw a Plains to go with the Roast and Magmatic Insight in your hand.

"Anything good?" she asks.

"No," you say, "but that might come soon enough. I'll cast Magmatic Insight, pitching a Plains."

Raquel nods, and you draw an Angel of Condemnation, followed by a Maze of Ith. You have to admit that that's a lot better than you were expecting.

"I'll cast an Angel of Condemnation," you say.

You nod. Between the Angel and the Dragon, you now have two 3/3 flyers going up against Raquel's spate of four-toughness blockers. Raquel's move with the Shriek Raptor has left you both in stalemate, and as you play your Maze of Ith, you wonder if that was her plan all along.

"That's all for your turn?" Raquel asks.

You tap your last two lands and aim your Roast at her Watcher in the Web. "I just needed to do that," you say.

Raquel smiles, untaps and draws her card for the turn. "Do you have more removal?" she asks, dropping a Teneb, the Harvester onto the table.

You stare at her 6/6 Legendary Dragon for a while, thinking you should have known that her black splash wasn't just for a single Gloomdrifter. Now you have something worse to contend with.

Raquel passes the turn without further incident, and you knock the top of your deck twice. Your draw is nothing short of miraculous: Valorous Stance!

You immediately sit up and begin tapping your lands, then stop at the last second. Maybe, you think, this is another one of those subtle plots. Maybe Raquel's fully expecting you to drop what limited removal you have on the first vaguely threatening card you see. You have to admit that you don't really know what else is in her deck at the moment.

Then again, you might just be overthinking things, and Raquel really has no idea what she's doing.

It is the start of your first main phase. Defeat Raquel before the beginning of her next combat phase. 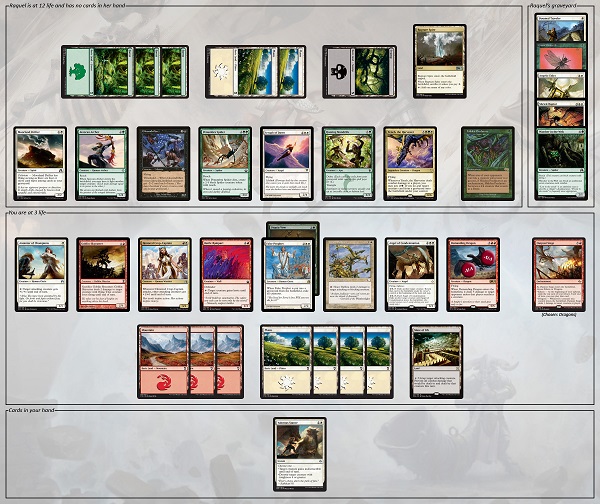 Raquel is at 12 life and has no cards in her hand. She has the following cards in play:

Raquel has the following cards in her graveyard:

If you think you've got a great solution in mind, don't put it in the comments! Instead, send it to puzzles@gatheringmagic.com with the subject line "Puzzle - Bordering on Madness" by 11:59 P.M. EST on Monday, March4, 2019. We'll include the best ones in next week's article along with the next puzzle!

"The key to this puzzle is Diregraf Escort's Protection from Zombies ability," Kirk Maijala writes. "The opponent's board is too clogged to just attack through, but two of his three fliers (Skaab Ruinator and Mothdust Changeling) are Zombies, which means that all we have to do is deal with the Evershrike to punch through with a flier.

"The problem is that Evershrike has Protection from White, keeping it safe from our own answers. Luckily, Protection from Zombies also gives us the perfect solution to that problem, by rendering the best targets for Phyrexian Bloodstock illegal and forcing the opponent to kill his own Evershrike."

"The path to victory is clear," Greg Dreher adds. "You need to get one of your flying creatures through, and get enough damage out of it to win you the game. But in order to succeed, you'll have to sacrifice your creatures like so many teenage camp counselors in a slasher flick."

Of course, it doesn't pay to kill them all at once - you have to be methodical about it. Hyman Rosen writes:

"This is another case of dead on board," Ryou Niji remarks, "and of course it's the opponent's fault: The ability of Evershrike can be used at instant speed! In this case, letting it jump out after all our attack triggers have resolved would render it immune to these specific chain-reaction shenanigans. Instead of swinging for lethal, we would end up being forced to pay five mana to cycle away Survive the Night, looking for another way to answer Evershrike."

"As you walk away to report the match result," Russell Jones writes, "you can console Jason by suggesting he might have better luck coming back in September. In addition to getting a couple more sets by then, he'll also get to take advantage of a Friday Night Magic tournament that actually falls on the 13th... as long as the store is well-stocked on judges that night to attend to any foul play."

"For safety's sake," Greg adds, "I recommend not playing a game of Magic with Jason at summer camp. And run for your life if he drafts Trusty Machete."