Login
0 Item
Advanced Search
Sign In
Create Account
Cécile walks up while you and Mari are going over the remains of a Masters 25 draft deck. "Hey," she says, "what did you do to the twins? They were really quiet when I arrived."

You and Mari exchange a look. "They really get on your nerves," Mari says. "Did you know that?"

"After the draft finished, the girls challenged Mari to an extra match," you say. "Mari beat them pretty badly."

"She did? I saw Renata's deck -- a fast one that had multiples of everything. It was White and Black with a touch of Green. Was that the one you played?"

"Yeah," Mari says. "And if you think it's bad playing against just one of them, try it when both of the girls are giggling at you from across the table."

"That sounds like an average Thursday night at their house," Cécile muses.

"Their last attack did feel that way, didn't it?" you mention.

"You see," Mari tells Cécile, "it was like this. They attacked with a lot of creatures. I meanâ.â.â.â two Knight of the Skyward Eye, three Vampire Lacerators -- I'm sure it was three of them -- and a 3/3 Primal Clay. They also had a second Primal Clay that was acting as a Wall, and a Zulaport Cutthroat that I couldn't get rid of because they kept a Swiftfoot Boots on it the whole time!"

"But you had a lot of blockers as well," you say.

"Right. Even though I was tapped out, I still had a bunch of Insect tokens from a Broodhatch Nantuko earlier. I didn't think I could take down the Knights, but I tried to bring down the Lacerators with some of my better blockers."

"So what happened then?" Cécile asks.

"They tapped all their lands for a total of 5 mana, then activated one of the Knights. Fortunately, I only had a Timberpack Wolf blocking it, so I wasn't too worried at the loss."

"And that's when they played the Echoing Courage," you say.

"Echoing Courage on the Vampire Lacerators!" Mari cries. "And they exiled a Simian Spirit Guide from their hand to do it! I mean, who does that?!"

"Wait," Cécile says. "I thought you won that game."

"I did. When everything settled, we were both at 4 life. I just had a lot less creatures than they did. And after my draw step, I had a Cloudshift and an Epic Confrontation in my hand. I was wishing I had used the Confrontation earlier, but the Cloudshift changed everything for me right then."

Mari starts sketching out her last board state on a spare scorepad. "The twins had multiple copies of Pacifism in play, too, so I was down to two attackers. But they should have realized that the face-down creature on my side of the table was an Ainok Survivalistâ.â.â.â"

As Mari goes over the story of her last turn with Cécile, you take a moment to consider things. While it's debatable as to what kind of game the twins were playing, they definitely overplayed their hand in their last move. Maybe they were trying to intimidate Mari, or maybe they were just being themselves. But whatever the case, they did end up creating an interesting situation to think about.

It is the start of your first main phase. Defeat Renata and Raffaela before the beginning of their next combat phase. 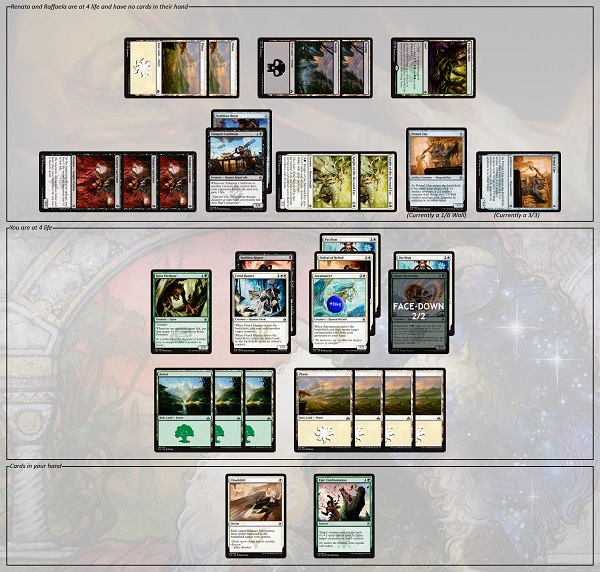 Renata and Raffaela are at 4 life and has no cards in their hand. They have the following cards in play:

If you think you've got a great solution in mind, don't put it in the comments! Instead, send it to puzzles@gatheringmagic.com with the subject line "Puzzle -- Better in Multiples" by 11:59 P.M. EST on Sunday, April 1, 2018. We'll include the best ones in next week's article along with the next puzzle!

"A quick glance at our board," Steven Givens writes, "shows a Soulbright Flamekin (with plenty of mana), a Chartooth Cougar (a creature that can be pumped with that mana), and a Promise of Bunrei with a Valor in Akros (so if we manage to have one of our creatures die, all our other creatures will get +4/+4 until end of turn). The downside is that our opponent is at a healthy 14 life, and also has twenty toughness worth of blockers to try to trample over."

"With Promise of Bunrei representing 12 points of damage if we can get three of our creatures through (which we can with trample)," Ryou Niji notes, "it makes sense to spend some resources on making it happen. There is one obvious way to do that: the last ability of Court Hussar."

With a strange assortment of lands at your disposal, however, you need a solid plan to get one of your Court Hussars into your graveyard. Enrique Cordero covers this in his solution:

"At any point," David Arnold points out, "Hiro could activate Fathom Seer with Presence of Gond to create a 1/1 Elf token. He cannot, however, block with both Fathom Seer and the newly-created Elf, so it would only serve to cause him to take more damage."

"One interesting thing about this puzzle is the necessity to use Red mana as colorless mana in order to get more Red mana," Michael Feldman muses, "one of which is used to essentially become a different color anywayâ.â.â.â"

Unfortunately, it looks like CJ threw this one away. "It is true that this is probably still too difficult to calculate at the table," Ryou adds."On my first try I didn't notice that Court Hussar has vigilance, so I was 2 damage off. Still, even that line would force the opponent to block with almost every creature, and then if the opponent draws a blank, our Spirit tokens can probably hold the fort for one more turn, and then maybe win next turn. At the very least, that would present a difficult blocking problem to the opponent."

"Poor CJ," Addison Fox writes."Although I admit it's easier to know you have the kill when it's posed as a puzzle rather than having played a whole game to get there."