With War of the Spark on the horizon, you were expecting your local game store's Unabridged Cube to pony up some more preview cards. It does, after all, supposedly have one of each card ever printed... but for some reason it hasn't been generous today, what with only a single Totally Lost and little else.

"I really want to get my hands on a Nicol Bolas, Dragon-God," Ryan admits.

"Have you seen it? It's a five-mana draw or removal effect, with a win condition!"

You shrug. You can already name more than a few cards you want to own from the new expansion, but right now you have a game to consider. And it's only by the skin of your teeth that Ryan has a slight advantage.

That advantage, mind you, only came about because you ran out of creatures in your graveyard. Your Necratog was a supreme force on the battlefield for most of your midgame, but once it ran out of sustenance, Ryan wasted no time in kicking a Torch Slinger to put the Black Atog out of commission.

Now you're stuck in an uneasy stalemate. On average, Ryan has the bigger creatures - including a 6/6 Skysnare Spider - but you have a 6/2 Zombie Trailblazer standing guard, and more than a few tricks up your sleeve. The only points of damage your opponent has managed to deal in the last few turns have all been from instants and sorceries bouncing off his Electrostatic Field.

"You got an interesting card pool," Ryan says.

"I mean you drafted both a Jace, Vryn's Prodigy and a Liliana, Heretical Healer," Ryan says. "That's a coincidence."

"Yeah, well, this Cube is made for coincidences. I heard that somebody drafted two Teferi planeswalkers last week, plus Teferi, Mage of Zhalfir, plus a Disruptive Student."

"That's crazy. But I still wish I had a Nicol Bolas."

Unfortunately, Ryan's making it no secret that he's drawn into something big this turn - literally, as he taps eight lands and drops a Borborygmos Enraged on the table. "I'll settle for this, though," he declares.

"Is that why you haven't been sacrificing anything to Fault Riders?" you ask.

"Sort of," Ryan says. "Why risk it when you can just wait for your bomb?"

You definitely don't agree with that, considering that you've been saving a Serrated Biskelion / Banewhip Punisher combo for just this occasion. But you don't say anything.

You untap to start your turn and draw the top card of your library, adding a Fate Transfer to your empty hand. That's some interesting timing, you have to admit - you originally brought it in to interact with the Biskelion and Punisher's abilities, but obviously that intended use is quite limited at this point.

What gets your attention, however, is the question of how you can get past Ryan's defenses before he starts throwing big creatures at you. You're pretty sure there's a plan here. Now if you can only find it before Ryan moves in for the kill...

It is the start of your first main phase. Defeat Ryan before the beginning of his next combat phase. 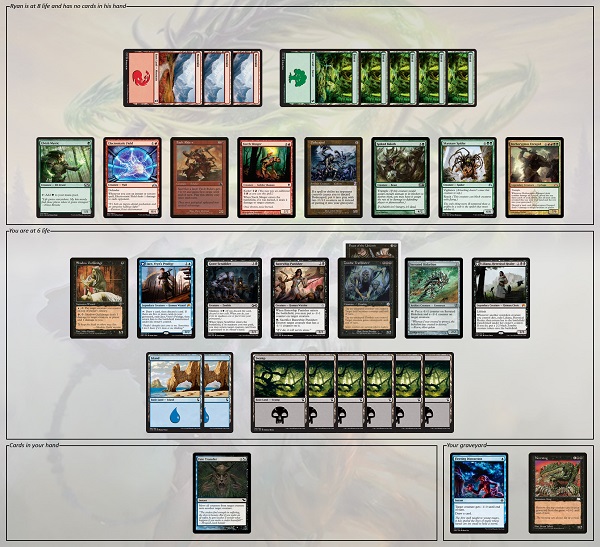 Ryan is at 8 life and has no cards in his hand. He has the following cards in play:

If you think you've got a great solution in mind, don't put it in the comments! Instead, send it to puzzles@gatheringmagic.com with the subject line "Puzzle - Dead on Your Fate" by 11:59 P.M. EST on Monday, April 22, 2019. Sean's out of town right now, so the solution to this puzzle will be posted in a couple of weeks once he gets back!