Login
0 Item
Advanced Search
Sign In
Create Account
You're back playing your local game store's Unabridged Cube this weekend, and an uneasy feeling has settled over the battlefield.

"I've been in this situation before," you say.

You shake your head. "I've got two of the legendary creature-planeswalkers from Magic Origins," you explain.

"Yes," Miranda says. "You have Kytheon, Hero of Akros and Chandra, Fire of Kaladesh. I can see them right in front of me. How is anything wrong with that?"

"You had Kytheon and Chandra last week?"

"No, I mean... last week it was Jace, Vryn's Prodigy and Liliana, Heretical Healer. It's just weird that I'd get four out of the five-card cycle in two straight booster drafts."

"Well, it's the Unabridged Cube," Miranda says, as though that explains everything. "It's got one of each card ever printed. Coincidences like this happen."

"It could also mean that the Cube's trying to tell me that War of the Spark is coming."

Miranda grins. "Are you saying that it has a mind of its own? Maybe you should get your head back into our game."

You nod. Seeing that both you and your opponent are at low life totals, maybe you really should pay attention to the board right now. After seeing a lot of removal on both sides of the table, both you and Miranda are looking for ways to break through for the win.

"Did you attack with anything?" you ask.

"No," Miranda says, "but I'm about to. I'll send in my Merfolk Skyscout, then have it untap itself as part of its trigger."

"Okay, I can't block that," you admit. "I'll just activate my Raka Disciple to prevent one damage. I'll take one and go down to four life?"

You glance at the Gods Willing in your hand, realizing that it won't stop the big dragon from wiping out half the creatures on your side of the table next turn. "Ouch," you say.

"I take it that whatever you have in your hand doesn't help."

"No, but maybe my next draw will."

You untap your permanents and draw your card for the turn. A Path of Mettle isn't quite the saving grace you were looking for, but at least it's not a land. (That is... at least its front half isn't a land, but you're not concerned about the technicalities.)

Miranda raises an eyebrow. "Do tell," she says.

"I need to figure out how to use it, though."

"That's a relief," she says. "With those two proto-planeswalkers you have, I'd have thought you were going to win this game before I could."

You blink. There's a way open for you at the moment, but it's not necessarily going to be easy.

It is the start of your first main phase. Defeat Miranda before the beginning of her next combat phase. 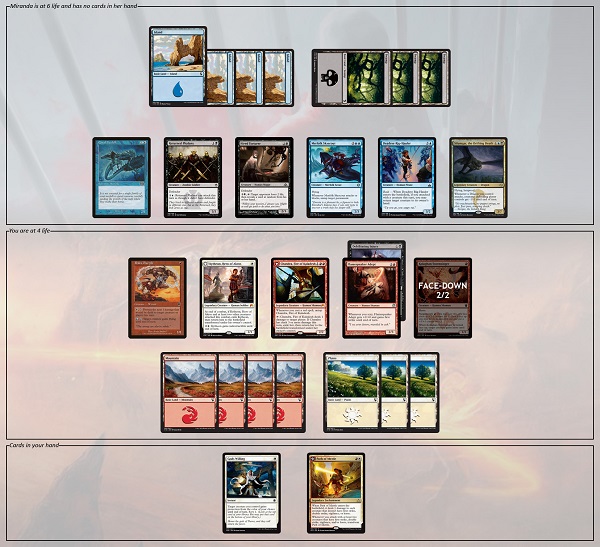 Miranda is at 6 life and has no cards in her hand. She has the following cards in play:

If you think you've got a great solution in mind, don't put it in the comments! Instead, send it to puzzles@gatheringmagic.com with the subject line "Puzzle - Only the Worthy" by 11:59 P.M. EST on Monday, April 29, 2019. Sean's out of town right now, so the solution to this puzzle will be posted in a couple of weeks once he gets back!