"This didn't exactly turn out the way I expected," you admit.

You survey the ruins of your board, mindful of the fact that you still need to resolve combat damage from Zila's current attack. "Just look at what we're playing. I'm in Naya colors, while you're in Blue-Black."

Zila glances at her cards. "Well, I'm attacking you with your own Godsire right now, so I guess you're not going to see any objections from me."

Obviously, your first foray into your local game store's Unabridged Cube after this month's War of the Spark events hasn't turned out well. Your deck has more than its fair share of rares today, but they've barely helped you in this match.

To be fair, the problem isn't just the Godsire that you managed to cast before Zila stole it with a well-timed Krovikan Whispers. It's also the Vampire Nighthawk that's had uncontested control of the air for the last few turns, and it's also the Ludevic's Test Subject that's standing guard with your Vow of Wildness attached.

"You're just attacking with my Godsire and your Nighthawk, right?"

"You haven't tapped the Godsire."

"Vigilance," Zila reminds you. "And yes, I'm expecting to have a Son of Godsire at the end of your next turn."

"So are you're blocking the Godsire? You're losing this game if you don't."

"Yeah, it's just a question of what I'm blocking it with," you grumble. The Unabridged Cube is a special construct in that it has one of each card ever printed, but you're not sure if it's given you a disposable blocker today. You still have a Druids' Repository in your hand, so using your Rushwood Herbalist's ability on any of your creatures is an option. Considering that you've fed a few lands to your Living Twister already, though, you have the feeling that you might need a source of extra mana soon.

You tap one of your Forests and move a counter off your Ulasht, the Hate Seed. "I'll just create a Saproling token and block Godsire with that."

"Suit yourself. Vampire Nighthawk gets in for two?"

"That puts me at five life," you answer.

"And me at sixteen life," Zila says.

"Are you casting anything postcombat?" you ask.

"Just this," Zila says, tapping her remaining lands and dropping an Archfiend of Despair onto the table.

You sigh. "I guess we know who's king of the monsters around here now."

"You're being dramatic," Zila says. "But you are losing another two life from the Archfiend. You can start your turn now."

You untap your permanents, wondering if there's any way you can come back from your current position. You don't like your odds, particularly considering any plan that lets you win at this point might mean having to drop-kick Zila's entire defensive line.

You draw a card and add a Thrive to the Druids' Repository in your hand. You have enough mana to cast it for all of your creatures, but that might not be too useful against blockers of a much larger size.

"I'm going to need a while to think about this," you say.

"What I'm hearing from that," Zila points out, "is that you think the brute force approach isn't going to work."

It is the start of your first main phase. Defeat Zila before the beginning of her next combat phase. 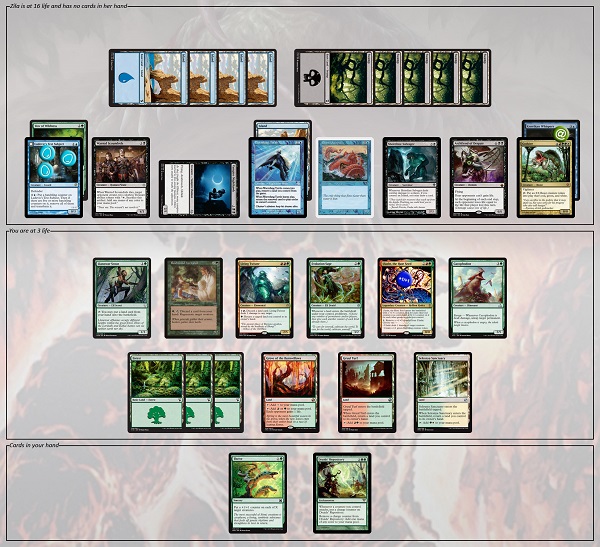 Zila is at 16 life and has no cards in her hand. She has the following cards in play:

If you think you've got a great solution in mind, don't put it in the comments! Instead, send it to puzzles@gatheringmagic.com with the subject line "Puzzle - ...And There Goes Tokyo" by 11:59 P.M. EST on Monday, May 27, 2019. We'll include the best ones in next week's article along with the next puzzle!

"This was a tough puzzle," Philip Belin writes. "I immediately saw the Price of Betrayal + Chandra, Fire Artisan combo, but realized that you needed a way to deal with The Wanderer, whose static ability shuts off your noncombat damage.

"The tricky part was figuring out how to set up your attacks to win in all possible blocking scenarios. I was stuck on figuring out how to push through damage until I saw Duskmantle Operative's ability. To take full advantage of it, you need to cast Nahiri's Stoneblades targeting one of Nox's creatures."

"So," Jonah Comstock adds, "we're going to win this game by pumping our opponent's creature, then killing our own planeswalker. Isn't Magic a weird game?"

"Even though it looks like you should be attacking Nox with more than one creature," Chris Billard writes, "especially with Nahiri'sStoneblades in hand, realizing that you have to commit two creatures to attacking The Wanderer leads to the guaranteed win condition. And although Chandra pays the price of betrayal, is she the traitor or is it really Nox's Loxodon Sergeant that let the Duskmantle Operative through?"