Editor's note: This puzzle has been corrected from its original version. We apologize for the inconvenience!

You take a seat across from Mari. "So," you say. "how long do you think CJ's going to take?"

"He just went to hit the can," Mari says. "It's not like that takes a really long time."

"I don't know. Sometimes it's hard to find a bathroom in this place. Cécile actually got lost the other day, and..."

"That doesn't matter, really," Mari sighs. "Can you finish this game for him?"

"I got it. I just wanted to make sure I could stop holding back," Mari says, pressing one hand against her forehead.

Somehow you're not surprised at that. CJ isn't very good at limited play, much less impromptu booster drafts in a lockdown environment. Mari's made it a personal mission to try and show him how to raise the quality of his game, but her success so far has been debatable.

"CJ thinks we're at a stalemate," Mari explains, "but I think he's just forgotten that my Celestial Crusader exists. I've got enough ground forces to bury him, but I've held off from attacking with any of my flyers under the pretense that he's got a good thing going with Nectar Faerie and Grandmother Sengir."

"Okay," you say. "That explains why your Crusader and Eye Collector are untapped. What about the Regal Bloodlord?"

"I just cast that last turn."

"We're both at one life," Mari admits.

You raise an eyebrow. "That's interesting," you say.

"That's courtesy of the best play I've seen him make during this game," Mari says. "He got a Sleeper's Guile on his Master of Cruelties, took out my only untapped Black creature, and then got me to one."

"And he obviously hasn't been able to follow up on it."

"I gave him a few chances. Right around the time he left, I was about to give him one more opportunity to seal the deal before I ended everything and turned on the TV."

"That sounds like you're now giving *me* one more chance to seal the deal."

"He's lucky he decided to go for a bathroom break when he did," Mari remarks.

"Yours. CJ's already taken his draw - that's the face-down card over there."

You pick up the card and have a look. It's a Go for Blood - not a bad draw at all. You wonder what CJ would have done with it. 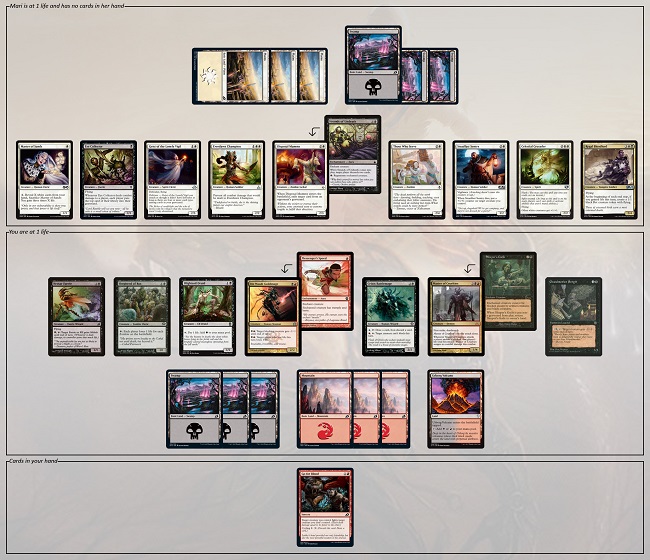 Mari is at 1 life and has no cards in her hand. She has the following cards in play:

Mari has no relevant cards in her graveyard.

Instead, if you think you've got a great solution, you can send your solution to puzzles@gatheringmagic.com with the subject line "Puzzle - Where it Lies" by 11:59 P.M. EST on Monday, June 8, 2020. We'll include the best ones in next week's article along with the next puzzle!

"The puzzle's title may most obviously refer to Kozilek and the Krakens," Michael Feldman writes, "but it could also easily hint that this is one tangled mess!

"It took me a while to sort through the possibilities. One key is realizing that Kozilek won't be helping you as an attacker. You never know when you might redraw it, so there might be less than four cards in your library when you recast it. You could survive that by sacrificing the mighty Eldrazi, but then you may as well have discarded it in the first place. Besides, annihilator won't do much good in one turn when CJ has all those lands to sacrifice.

"You might think of milling CJ to death with Venture Deeper, but even if you can get it back in your hand several times (you sort of can) and get another Island in play (you can, too), you still have a limit of

, which wouldn't be enough even if you cast the spell four times. It's actually more limited than that, though, because to recur Venture Deeper, you need to cast Merfolk Secretkeeper as a creature and sacrifice it so that it hits your graveyard. That takes Blue mana as well, so really, you can only cast Venture Deeper twice at most, for a measly eight milled cards.

"With no effective mill and no guaranteed way to bust Leyline of Sanctity, combat damage is your only avenue. As it turns out, all that card drawing can really just come down to pumping out Krakens in an infinite loop."

"Let's work backward," Hyman Rosen notes. "We want to be in the following situation:

In order to kick off this combo, you'll therefore need to drain your library and graveyard (in addition to getting seven more draws). Interestingly enough, Russell Jones points out that you only need 4 mana to order an extra-large serving of calamari:

"CJ will gain a life for each Kraken token," Sean Patrick Keatley writes, "but your 8/8s will far outweigh their blockers and life gain. Eventually when you are ready, discard Anger, then swing with all of your Kraken and they die!"