"We're talking about the Unabridged Cube here," you explain. "Take it from me: Sometimes you get bad card pools, and sometimes those bad card pools contain interesting cards that are worth using in corner situations. Having one of each card ever printed does that."

"You're just saying that because I don't have any way to get past your Ensnaring Bridge."

deck is far stronger than your middling

concoction, but it's also slow. It's slow enough, in fact, that even after she took out half of your creatures with a single Inner Demon, you were able to empty your hand and hold her back with that timely Ensnaring Bridge of yours. You quickly followed this up with a Natural Spring, and Desdemona's been stewing ever since.

The problem is that, despite the impossibility of the situation, Desdemona's still playing. She does have a Blood Artist on the battlefield, but you can't imagine she has enough removal to bring you down one life at a time.

"How many cards do you have in your hand right now?" you ask.

"I just took my draw, soâ.â.â.â three," Desdemona says. "And you'll love this."

You glance at your scorepad, and then go over her side of the table for a while. "I'm not sure if I get what you're trying to do," you admit. "The two creatures you just cast don't do anything against my Ensnaring Bridge. If anything, you just put yourself on an eleven-turn clock."

"Remember that Liliana's Contract I cast a few turns ago?" she asks.

"Well, I've got four Demons in play now," she says. "That means that you've only got one turn left."

Desdemona points to her Emberhorn Minotaur. "You do know that Inner Demon changes creature type, right?"

You remain silent as the realization dawns on you: Desdemona's looking at a win on her next upkeep! As you untap your permanents, you start frantically searching for a way out of this mess. But you've barely got any creatures in play, you have zero cards in hand, your opponent is at 21 life, and your own Ensnaring Bridge is going to stop you from attacking properly!

You peel a Stitcher's Apprentice off the top of your library. Whatever you need to do, you need to do it quick -- or otherwise this contract is going to be signed, sealed, and delivered in Desdemona's favor.

It is the start of your first main phase. Stop Desdemona from winning the game at the beginning of her next upkeep. 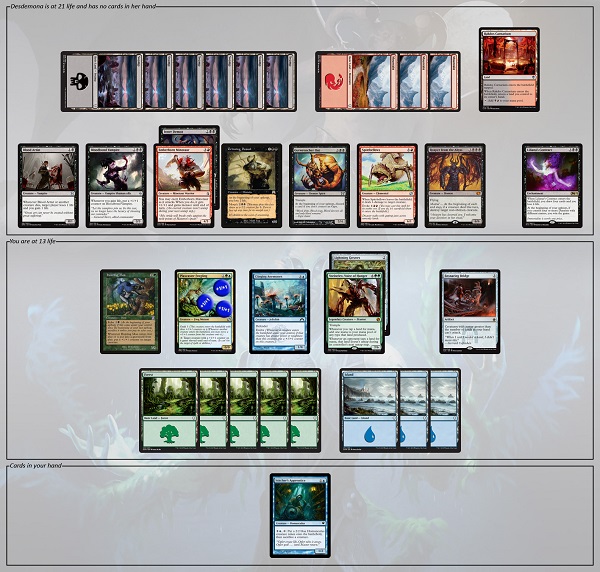 You are at 13 life, with the following cards in play:

Desdemona is at 21 life and has no cards in her hand. She has the following cards in play:

If you think you've got a great solution in mind, don't put it in the comments! Instead, send it to puzzles@gatheringmagic.com with the subject line "Puzzle -- The Fine Print" by 11:59 P.M. EST on Sunday, July8, 2018. We'll include the best ones in next week's article along with the next puzzle!

Your situation here is a difficult one. Michael Feldman notes that there are more than a few observations to start with:

"With all that untapped mana for the opponent," Ryou Niji clarifies, "all of his creatures with power 5+ may as well have indestructible now, and we also lack enough -X/-X effects to kill any of them.

"Therefore the largest target for Puppeteer Clique is Snapping Sailback, which can also get a few counters from its enrage ability after reanimation, but not quite enough for lethal. Another potential reanimation target is Magma Phoenix: If we can have it die twice, that would be 6 damage on its own -- but the remaining 9 damage is nowhere to be found.

"This seems hopeless until we notice that Lawless Broker allows Puppeteer Clique to persist twice, and the combination of the two ideas above could yield an answer."

The solution involves a lot of timing considerations, some careful usage of the stack, and more than a few regeneration shields. Matt Bocek demonstrates:

"With mana standing, Terry has some options," Chris Billard adds."He can make his Spearbreaker Behemoth, Oakgnarl Warrior and/or Avatar of Fury indestructible at any time meaning we can't steal them with Puppeteer Clique. Also, our life total and the Sorcerer's Wand prevent us from using the Magma Phoenix more than twice. Even with all these options though, it turns out that this game ends with a Thud!"