With the Magic Origins prerelease coming up, your local game store reduced the entrance fee for its Modern Masters 2015 Edition Drafts. That prompted you and a few other people to drop by, possibly for one more chance at that foil Tarmogoyf.

You didnât open a foil Tarmogoyf (much less a regular one), but you did find yourself in another sticky situation. Josefine has been tearing up this Draft with a G/W deck full of bombs, while youâve been stealing games with an artifact-heavy concoction. Youâre now facing each other in your third game of the final round, with the storeâs last few Modern Masters 2015 Edition packs at stake.

Fittingly, your game has been one for the ages. You landed several quick hits as Josefine flooded on mana, but she stabilized on the back of a Precursor Golem and slowly started to roll over your defensive line. Eventually, she dropped a Battlegrace Angel into playâbut that wasnât backbreaking by itself. No, the real kicker was the Copper Carapace that she cast and equipped last turn, allowing her to attack with the Angel for 7 points of lifelinked damage.

You untap and start your turn, wondering how you can possibly take Josefine from 16 life to 0 in the limited time you have left. The Nameless Inversion you draw seems to mock you: It would have been a lot more useful if it had shown up earlier.

With the situation looking grim, your prospects of winning the Draft are disappearing right before your eyes. But youâre not going to let go of those prize packs so easily. That foil Tarmogoyf will not be denied!

It is the beginning of your first main phase. Defeat Josefine before your turn ends. 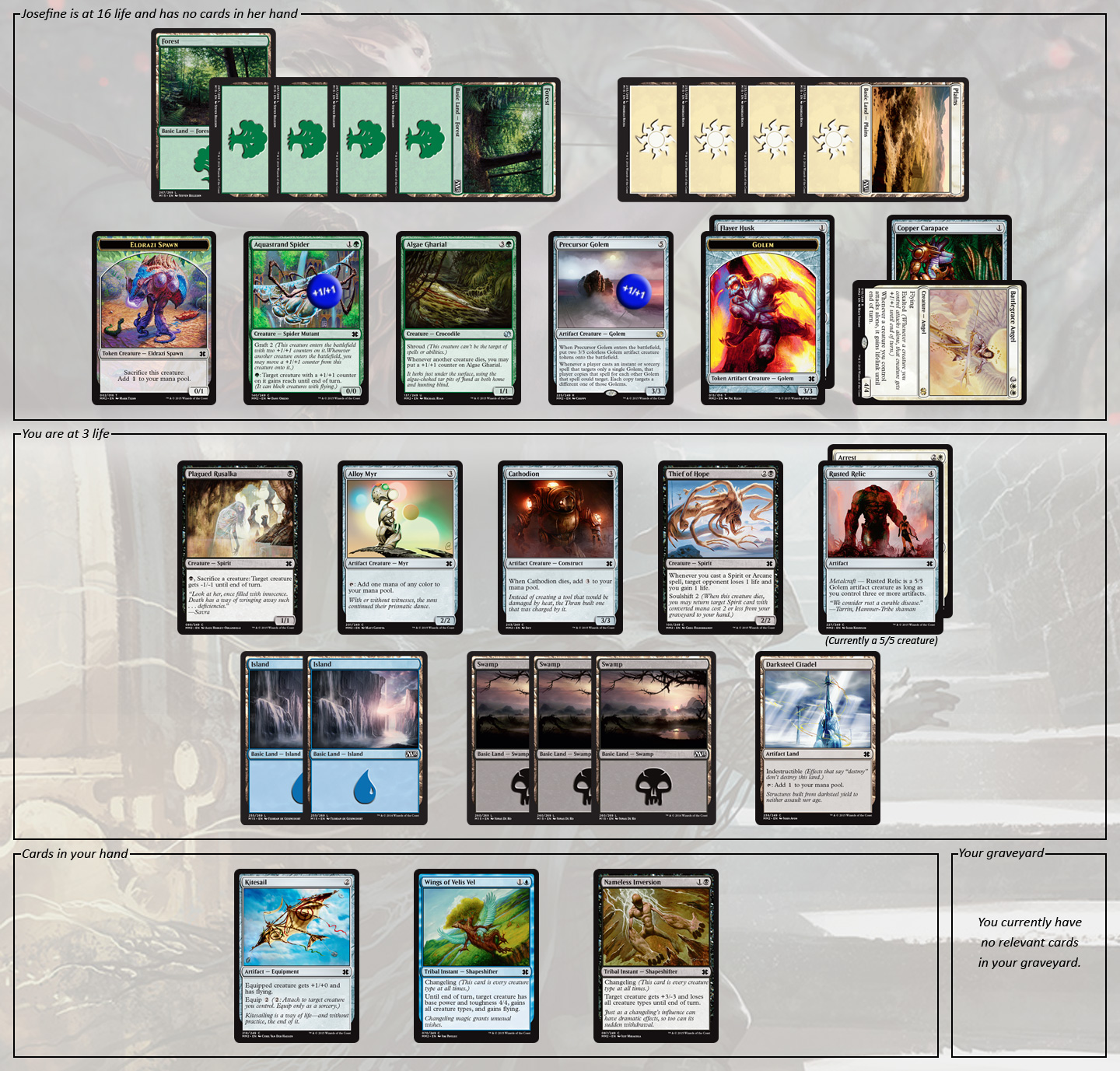 You are at 3 life with the following cards in play:

You currently have no relevant cards in your graveyard.

Josefine is at 16 life and has no cards in her hand. She has the following cards in play:

If you think you have a great solution in mind, donât put it in the comments! Instead, send it to puzzles at gatheringmagic dot com with the subject line âPuzzle â Saving Graceâ. Weâll include the best ones in next weekâs article along with the next puzzle!

âThis puzzle feels very Wurm-like in its straightforwardness,â Andrew Muravskyi notes in his analysis. âWe must bring our opponentâs life to 0 on our turnâotherwise, he'll stack Obzedat's and Seizan's triggers to avoid going below 0 and obliterate us with Debt to the Deathless.â

Once itâs established that you need to find a way to recycle the Hornet Sting, the plan comes together. âIt turns out that Elf Warriors are white permanents (needed to activate Mistveil Plains),â Andrew Muravskyi writes, âand also an excellent source of eyeballs.â

Itâs worth noting that you can still retrieve the Hornet Sting even if your opponent sacrifices a land to Argothian Wurmâs trigger and puts it back on top of your library:

That said, several respondents found that it was also possible to win by taking advantage of Argothian Wurmâs ability yourself. Aaron writes:

Aaron adds, âThe second time you cast Argothian Wurm, it doesnât matter if Andrew sacrifices a land to put it on top of your libraryâyou have more than enough eyeballs to find Hornet Sting. Even if you had somehow started with forty-one cards in your library instead of forty (meaning that Hornet Sting would be the thirty-second card in your library), you could retrieve it by holding priority after Cream of the Crop's ability resolves but before Argothian Wurm's ability does.â

As it turns out, the timing of Mercy Killing is an important element to the sequence of plays: âNone of the white permanents except Novablast Wurm are our own,â Russell says, âso Mercy Killing needs to be cast early in order to enable Mistveil Plains.â

Finally, Brian posits an alternative strategy that relies on the contents of your library: âThe only thing we're sure of is that there are Wurms in the deck. So we can cast a kicked Pouncing Wurm and then use Cream of the Crop to look for a Bellowing Tanglewurm.â (Enlisted Wurm can also give you an additional shot at finding one.)

If you do find a Bellowing Tanglewurm, Brian continues, you can draw this by casting Mercy Killing on your Pelakka Wurmâin which case you would be looking at a total of 13 damage on your combat step (after killing the Peacekeeper). While itâs an unlikely scenario, itâs a viable move if you donât feel like riffling through your entire deck.