To be fair, you didn't set out to make one. But your Sealed Deck gave you a lot of cards in Blue and Black, almost no bombs, and a considerable amount of removal. With a Millstone and a Psychic Corrosion in your card pool, you figured that your best option was to make a deck that stalled your opponents long enough for you to run them out of cards.

The problem is that your deck is really inconsistent. Sometimes you draw both of your mill cards, only to get run over by a horde of attackers because your removal isn't up to snuff. Sometimes you draw a lot of removal, only to spend forever waiting for your mill cards to show up. And sometimes everything comes together -- in which case you end up with a massively stalled board and a frustrated opponent who wants nothing more than to feed you some torn-up pieces of glossy cardboard.

That's how it looks at the moment: You've got a mess of lands and creatures in play, you're just barely hanging on with a low life total, and your third-round opponent is impatiently looking for a way to pound you into bits. You're playing a bad deck.

"Move to combat," Zara says in a bored voice. "Leonin Vanguard triggers, and I gain 1 life."

"One more Bat token from my Regal Bloodlord."

"At the beginning of your end step. Let's not get ahead of ourselves."

You're a little worried about the Bloodlord, to be honest. Zara has had it in play for a couple of turns now, and her Leonin Vanguard means that she's going to have a substantial army of flying rodents very soon. The only thing holding her flyers back is a single Fell Specter on your side of the table, but that might get overwhelmed fairly quickly.

That doesn't look good, especially since the Stag is likely to tap your only flying blocker on Zara's next attack. Fortunately, you've been stockpiling removal in your hand for such an occurrence; given the size of Zara's library, you just have to survive for a few more turns.

Considering that you have a lot of lands in play, though, you figure that you can probably wait for your next draw before you do anything. "Go ahead," you say.

"That's all for my turn. Now I'll create a second Bat token from my lifegain earlier," Zara says, reaching for one from her deck box.

"I'll draw my card for the turn," you note. "Psychic Corrosion mills you for two more."

Zara drops a Swamp and a Plains into her graveyard. "Eight more cards," she says, "so you should just need two or three more turns."

Your draw itself isn't too bad: Even if you don't have a lot of cards left in your library yourself, an Anticipate might help you find more solutions (or ways to delay the inevitable, which is probably what you need right now). It's just a shame that Anticipate's ability isn't technically a "draw" effect itself.

Then again, Zara is practically on the edge of winning here -- depending on what she pulls from her library next turn, there are a few things she can do to wipe the last of your life points. So maybe you need to do something now rather than wait later. But do you have enough resources in play to take her down?

It is the start of your first main phase. Defeat Zara before the beginning of her next combat phase. 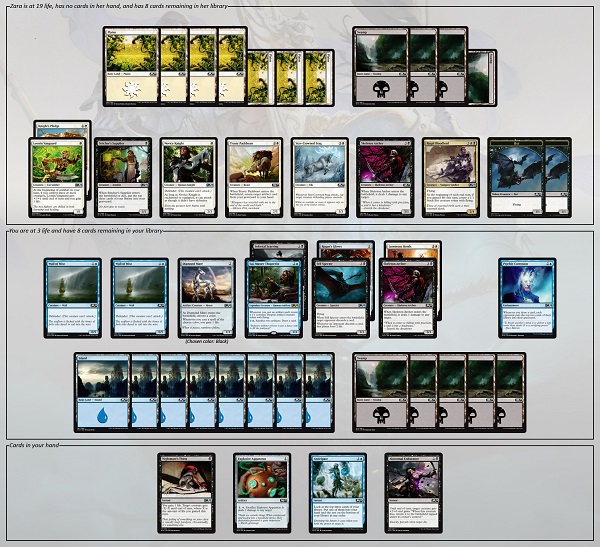 You have not yet played a land this turn. You have 8 cards remaining in your library, but you now neither the identities nor the order of those cards.

Zara is at 19 life and has no cards in her hand. She has the following cards in play:

Zara has 8 cards remaining in her library.

If you think you've got a great solution in mind, don't put it in the comments! Instead, send it to puzzles@gatheringmagic.com with the subject line "Puzzle -- Spare Parts" by 11:59 P.M. EST on Monday, July23, 2018. We'll include the best ones in next week's article along with the next puzzle!

"Spit Flame is a decent removal spell if you have no dragons in your deck," Addison Fox writes."If you've got enough to trigger it once, it's pretty much a bomb, and there's a chance that stuff in our deck could let us trigger it twice or more."

"The good news is that Huo has only four life," Greg Dreher adds, "and you have multiple attackers that have or can get at least 4 power. Play your cards right, and Huo will lose, no matter what he does."

The solution to this is actually rather straightforward, although it needs a single bit of insight and some multiple-scenario analysis. Michael Reluzco writes:

At this point, your opponent has only three blockers against your three attackers (one of which has Menace). Dominic Guido explains that he loses no matter how he decides to block:

If our opponent blocks the Dragon token and double-blocks Brawl-Bash Ogre:

If our opponent blocks the Dragon token and Catalyst Elemental:

If our opponent blocks Brawl-Bash Ogre and Catalyst Elemental:

"Interestingly," Chris Billard notes, "it does not matter which two of Huo's untapped creatures we target with Spit Flame. All we need to do is remove two blockers."

"Are we dealing with Hieromancer's Cage? Do we need a strategy for reach and flying? Do we have some other tricky problem?" Michael Feldman adds. "Whatever. Blow stuff up, hatch a dragon, blow a little more stuff up, send your brute squad over." Easy.