As far as you can tell, Josh's deck isn't supposed to be as effective as it is: It's top-heavy, runs very little removal, and shouldn't exactly be sitting at the first table. But it turns out that Josh is a slow, methodical player - and apparently that quality has won him his fair share of games.

You, on the other hand, just have a deck that refuses to work properly. It's supposed to play at a reasonably fast pace with cheap creatures and combat tricks. However, it has a nasty habit of giving you mediocre draws: it's not uncommon for you to bring your opponent down to single digits, then spend the next ten minutes frantically trying to find a way to finish them off.

Josh pulled out a surprise Hurricane to finish your previous game, so your back's to the wall at the moment. You assembled your usual horde of attackers and got Josh down to half his starting life, but his deck started coming back at that point with a Headless Skaab and a Netcaster Spider, and you've been stuck behind your front lines ever since.

"I don't think it's worth attacking at all," Josh murmurs.

"What makes you say that?"

"Neither my Sea Monster nor my Wall of Runes can attack," Josh points out. "That leaves me with five creatures against your seven possible blockers. You can easily find a combination of creatures that can block mine."

"You've got a Pawn of Ulamog, too, which means that you'll get Eldrazi Scion tokens for any of your blockers that die. And some of my friends have played you before; I don't think I want to leave an opening that might get you the win out of nowhere."

You sigh, noting that your reputation has apparently preceded you. "So you're not attacking?" you ask.

"I'm not attacking," Josh says, tapping his lands and placing the last card in his hand onto the battlefield. "I am, however, casting a Tidal Kraken."

You stare at the 6/6 unblockable creature for a while.

You shake your head, smiling. "You sure had me fooled there," you say. "You had me thinking that you had gone through that entire analysis in your head."

"Well, I did," Josh admits. "I did it last turn, though. The fact that I drew the Kraken a minute ago was just a bonus."

Josh shrugs. "Not when I can just attack for the win with my Kraken next turn. Or maybe I'll draw the Hurricane again - who knows?"

You can see where he's coming from. In fact, you can't even guarantee that you'll die to either the Kraken or the Hurricane: When you're dealing with a card pool of one of each card ever printed, the Unabridged Cube has a way of pulling nasty surprises on you.

"If you're not doing else, then," you say, "I'm activating my Acolyte of Xathrid before your turn ends."

You untap your permanents. The only thing that can save you now is removal, and surprisingly enough, your deck delivers with a Phyrexian Scriptures. Unfortunately, your elation is short-lived - you need to get to the second stage of the saga in order to get its mass removal ability, and you might not live that long.

Still, you'd rather not have your tournament experience end with a whimper. Perhaps there's something here that you're missing.

It is the start of your first main phase. Defeat Josh before the beginning of his next combat phase. 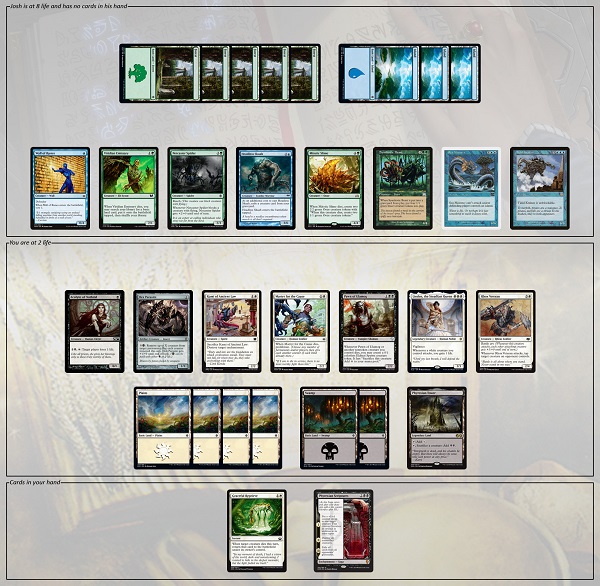 Josh is at 8 life. He has the following cards in play:

Josh currently has no relevant cards in his graveyard. You're fairly sure that he has some basic lands in his deck, but you're not sure what types of basic lands they are.

If you think you've got a great solution in mind, don't put it in the comments! Instead, send it to puzzles@gatheringmagic.com with the subject line "Puzzle - The Good Book" by 11:59 P.M. EST on Monday, November 18, 2019. We'll include the best ones in next week's article along with the next puzzle!

As more than a few people wrote, multiple solutions are possible here. The common thread between all such solutions is the fact that you need to use Fiery Impulse to trigger Akroan Conscriptor's ability. Curiously, though, each of these alternatives involves Akroan Conscriptor targeting a different creature!

The most common solution involves recognizing the problem on your side of the board. "Flowstone Surge is really annoying when you're trying to make things with two power unblockable," Addison Fox writes. We can't target our Conscriptor, we can't target our Embermage, and we can't target... our Lupine Prototype?"

While getting rid of Flowstone Surge resolves the problem of finding a target for Goblin Smuggler, there's the question of how to raise your creatures' power once more. Lupine Prototype becomes your point man (wolf? construct?) in this case, since you have an easy way to neutralize Sea Legs. "The key to this one," Max Bernstein writes, "is a) reading the Lupine Prototype's ability correctly, and b) realizing that the Embermage is Human:

This has at least one variant: You can start off by activating Reckless Embermage to destroy your own Cinderbones, which in turn destroys your Nyxborn Rollicker when it lands on the battlefield as a 1/0 creature. Casting Midnight Recovery before combat then lets you attach the Rollicker (and the Midnight Recovery) onto Lupine Prototype, and setting up your endgame with Mardu Skullhunter.

A second solution involves figuring out how you can work around the Flowstone Surge rather than disposing of it. "The solution to this puzzle," Jacob Butcher notes, "is mostly jumping through hoops to use Goblin Smuggler's ability twice, plus some direct damage:

This works just fine as long as you activate the Embermage's ability in response to itself, since any excess activations will still resolve even if the Embermage has died.

A third solution points out that the problem actually lies with your opponent's Dampening Pulse rather than your Flowstone Surge. If this is the case, then you would need to time your moves so as to remove the Pulse without compromising your ability to use Goblin Smuggler. Grag Atrim explains this further:

This approach has at least one variant that crosses over with the first solution: Instead of stealing Rust Scarab, you can instead steal Devout Chaplain and use that to exile Dampening Pulse. The rest of the solution is similar, taking down your opponent via a combination of Cinderbones, MarduSkullhunter / Fell Specter, and Reckless Embermage.

The amusing thing about all of these solutions, though, is probably the fact that you never use Fiery Impulse for what's presumably its intended purpose. But then again, perhaps the best way to protect yourself from a loss is to jump-start an offensive from an unexpected angle.