You sigh. Nox's Mono-White deck is just a little slower this game, but not by much. Considering that he's somehow acquired all of the White cards at your table, that's already nothing short of a minor miracle.

You're in the first round of another run at your local game store's Unabridged Cube, a motley collection of one of each Magic: the Gathering card ever printed. Booster Drafts with the Cube tend to be extremely unpredictable: A lot of evergreen deck archetypes come and go, and there's no guarantee that a wide-open color in the first pack will so much as appear in the second.

That, you think, makes Nox's Mono-White feat all the more remarkable: His deck picked up a six-turn kill against you in your first game, and you're thanking your lucky stars that his current draw is a little slower (but not by much).

That doesn't mean he's not going to run you into the ground, of course. "I'll attack with my Stonecloaker and my Knight of the White Orchid," Nox says.

You glance at his expression, but you don't find any clues there. It's public knowledge that you like each other about as much as oil and water: Nox thinks that he's a far better player than you are (yeah, in his dreams), and you think that he's a little too insufferable for his own good. In Nox's mind, those last six or seven games you've won against him are nothing more than a lucky streak.

The question now, however, is exactly why he's attacking with his Knight. You've got a 1/3 Mirran Spy that can easily block it, so he's probably telegraphing a combat trick of some sort. But if that were the case, why wouldn't he have also attacked with his Tomik, Distinguished Advokist?

The other possibility is that he doesn't have the trick, and you can remove the Knight with a triple-block between your Mirran Spy, Arcbound Worker, and Emry, Lurker of the Loch. But if it turns out that he does have the trick, then you'll lose most of your board, and you might as well concede at that point. Decisions, decisions.

That said, your safest option is to simply let the Knight through. That'll bring you down to six life, but it'll at least stop you from worrying about instant-speed effects.

"No blocks," you finally say.

Nox gives you a really ugly laugh. Then he marks down your life total, taps four lands, and drops a Michiko Konda, Truth Seeker onto the battlefield. You wonder if he's trying to make you feel stupid for expecting a combat trick where there wasn't one.

"Okay," you say, thinking about your next turn. Untapping your Sol Ring will put you in a position where you can start machine-gunning Nox's smaller creatures with your Ghirapur Aether Grid, but that's not looking to be fast enough to hold the line. What you need more than anything else right now is an absolute miracle of a draw.

Unfortunately, after untapping your permanents, you don't quite get what you want. Where you fully expect your deck to cough up a decent creature, it instead gives you a very un-creature-like Welding Jar.

Nox is rubbing his hands at the moment, probably figuring out if he has enough time to get something from the drinks cooler before the next match. You stare at the board, trying to find a good play. While you don't have much hope of winning this match, you can at least try to force a third game here, and when it comes to you and Nox, sometimes the small blessings are the ones that really count.

It is the start of your first main phase. Defeat Nox before the beginning of his next combat phase. 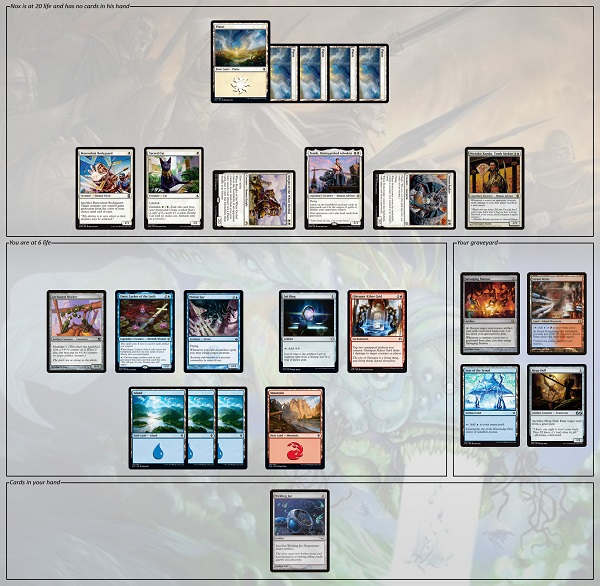 Nox is at 20 life and has no cards in his hand. He has the following cards in play:

If you think you've got a great solution in mind, don't put it in the comments! Instead, send it to puzzles@gatheringmagic.com with the subject line "Puzzle - Factory Floor" by 11:59 P.M. EST on Monday, December 2, 2019. We'll include the best ones in next week's article along with the next puzzle!

"In this puzzle," Greg Dreher writes, "the only way to win is through combat. The good news is that Devi's board is simple - no first strike, no lifelink, no activated abilities. The bad news is that thanks to Brave the Sands, Devi can block a whopping twelve creatures. So, all you need to do is generate even more attackers."

"The 'aha' moment of this puzzle," Duel Thyer notes, "was realizing that a cloned Fencer Clique would stop being cloned once it was back on top of our library, so we could stack our deck however we wanted for the polymorph ability."

"Metamorphic Alteration can graft Fencer Clique's ability onto Chancellor of the Forge so it can move to the top of our library, where Jalira, Master Polymorphist can bring it back," Jacob Butcher explains. "This creates Goblins and even draws us a card via Kiora, Behemoth Beckoner.

"In fact, Vedalken Mastermind and Kiora, Behemoth Beckoner let us repeat the process. The Reef Worm's 'growth' ability keeps our creature count up and triggers more card draws. Then Rites of Initiation and our extra cards pump up all those Goblins, and Devi is overwhelmed."

This, in fact, is all consistent with Greg's original plan. After all, sometimes the way to win a game is to bury your opponent under a sudden avalanche of Goblins:

Devi can instead choose to block twelve Goblin tokens and let Fencer Clique and the remaining three Goblins through, but this just results in more damage to her once you let loose with the Rites of Initiation.

"This is a clever one," Addison Fox muses. "It's obvious from the start that we need to somehow abuse Jalira to get Chancellor of the Forge to enter the battlefield, but what's not obvious is just how often we need to do that!"