Login
0 Item
Advanced Search
Sign In
Create Account
"I could have won this thing a few turns ago," Mari says.

"Yeah, pull the other one."

"I'm serious," Mari says. "The cards in this deck work really well together."

"So what happened?" you ask.

"Just one second," Mari says. "Are you attacking?"

"Yes, with my Amrou Seekers," her opponent says. "You take two damage."

"You were about to say something about the goblins," Mari's opponent says.

"What happened," Devi explains, "was that your friend cast Chancellor of the Forge, created seven or eight goblin tokens, and then rushed me with everything."

"I guess that means you had a surprise for her," you say.

"So how is it that you're still alive, Mari?" you ask. "That must have taken down your entire board."

"Most of my creatures were Green," Devi explains, "so I lost a couple of creatures as well. I was able to remove some of her biggest threats after blocks, though."

You nod. That neatly explains the current board state, although you can't help but think that Mari has a plan in mind. You can't quite see her general strategy, though - Devi has a good suite of blockers in play, and her Brave the Sands can easily stop any more of Mari's headlong rushes.

Devi plays the last card in her hand - an Arctic Wolves - and draws a card for its trigger. But then she pauses, taps her remaining lands and casts a Sifter Wurm!

"Lucky," Devi says happily, going over the top cards of her library. Suddenly she laughs.

"This is getting better and better," Mari says.

Devi places one of her cards back on top, then turns it over.

"That's nine life," Mari sighs. "Where does that put you now? Sixteen?"

"That was a good turn," Devi beams.

Mari untaps her permanents. "I guess it's time to see if I can win back this game," she says. "And I'm going to have a Blazing Archon on my tail next turn, too. At least you're not at twenty life or anything."

"Yeah," you say. "Sixteen is a lot more manageable."

Mari elbows you, then draws her card for the turn. You peek at her hand - she now has a Metamorphic Alteration in addition to her Rites of Initiation.

"It might be more interesting than you think," Mari says.

It is the start of your first main phase. Defeat Devi before the beginning of her next combat phase. 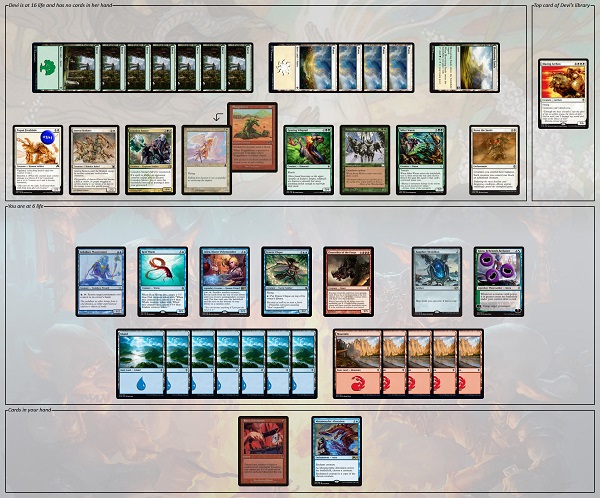 Devi is at 16 life and has no cards in her hand. She has the following cards in play:

Devi currently has a Blazing Archon on top of her deck.

If you think you've got a great solution in mind, don't put it in the comments! Instead, send it to puzzles@gatheringmagic.com with the subject line "Puzzle - And Another Thing" by 11:59 P.M. EST on Monday, November 25, 2019. We'll include the best ones in next week's article along with the next puzzle!

"This is a tricky one," Addison Fox notes. "It's important to brush up on how exactly Sagas work and when they trigger in order to solve it.

"A Saga chapter ability will trigger whenever lore counters are added to the Saga, if the number of counters on it is now equal to the chapter number. This doesn't necessarily mean using the turn-based action to add the counters, so proliferating works just as well. Removing lore counters doesn't trigger anything, but because this changes the number of counters on the Saga, it means future counter additions might behave differently."

"The key insight to this puzzle is that Phyrexian Scriptures' creature-removal ability is accessible via Martyr for the Cause's proliferate ability," Jacob Butcher writes. "In fact, with Hex Parasite's ability and a carefully-timed Graceful Reprieve, that ability can be triggered twice!

"Then we need to deal with Symbiotic Beast's tenacity, pump our survivor's power some, find some extra mana and life, and then take Josh's last life point with Acolyte of Xathrid. But it all flows from that first insight:

"To think that this is all because Mitotic Slime had the good sense to join the Phyrexian side, rather than be destroyed and set off *two* waves of tokens that would have been enough to outlive a nuclear holocaust," Russell Jones remarks. "It's rather more than the insects can say, for sure."

"There is a lot of stack manipulation involved here," Chris Billard observes. "After you cast Phyrexian Scriptures, everything will happen at instant speed. Despite everything Josh has done, it still looks like you get a win out of nowhere."

"I missed this the first time because weirdly-timed combat shenanigans are not my forte," Max Bernstein admits. "I don't usually think to drop two boardwipes after declaring attackers."