Login
0 Item
Advanced Search
Sign In
Create Account
Your opponent, Alexis, is being remarkably defensive for a

deck. Then again, that's probably because you spent the early part of this game exchanging damage back and forth. You had a slight advantage with a couple of small flyers Alexis couldn't block for a long while, at least until she pulled a Pyrotechnics and shot your birds out of the sky.

Now you're both stuck looking across the board from each other. On average, Alexis has the larger creatures. However, you have a better defensive line, which includes a Saltfield Recluse, a flying Serene Master, and a Lairwatch Giant that's discouraged most of Alexis' ground attacks.

So when Alexis taps three-mana to use the Dash ability on her Goblin Heelcutter, you know that something's happening. You're playing the Unabridged Cube, after all, and something happening is probably par for the course.

"I'll attack with my Goblin Heelcutter and Lathliss, Dragon Queen," she says. "I'll make it so that your Serene Master can't block."

"Any blocks for the Heelcutter?"

You glance at your creatures. "I'll have my Daring Skyjek block it," you say. "Then I'll tap Saltfield Recluse to get Lathliss down to 4 power."

You raise an eyebrow. "You do know that the Floating Shield on my Skyjek gives it protection from Red, right?"

"Wait, what?" Alexis reaches for the aura, and you hand it to her. She reads it for a little while, then gives it back to you, frowning.

"So there's not much for me to say," Alexis says disgustedly. "I guess I'm losing my Heelcutter."

"I was surprised you decided to do that," you tell her.

"I don't remember a lot of the older cards," Alexis admits. "Drafting a pool that has one of each card ever printed is new to me. That, and I might have gotten a little too focused on the possibility that you would block it with your Giant."

"Are you pumping Lathliss?" you ask.

"No," she says, "I have plans after combat. You're taking four damage and going down to five life."

You soon realize that Alexis' "plans after combat" happens to be a massive understatement. She taps all her remaining mana, drops an Engulfing Slagwurm onto the table, and passes the turn!

"I bet you're wondering why I only used Dash when I could have just cast the Heelcutter," she says.

You briefly consider blinking your Sea Gate Oracle before your turn starts, but you decide to keep your instant for a little while longer. With ten lands in play, you probably have enough to see what your next draw is, after which you could blink the Oracle if your library disappoints you.

Your draw turns out to be an Iridescent Drake. Not just any Iridescent Drake, but the Ultimate Masters version you pulled from your first pack. That's usually a good sign, you think.

"I'm about to play an older card that I don't see very often," you tell her, "so stop me if it looks like I'm doing something wrong."

It is the start of your first main phase. Defeat Alexis before the beginning of her next combat phase. 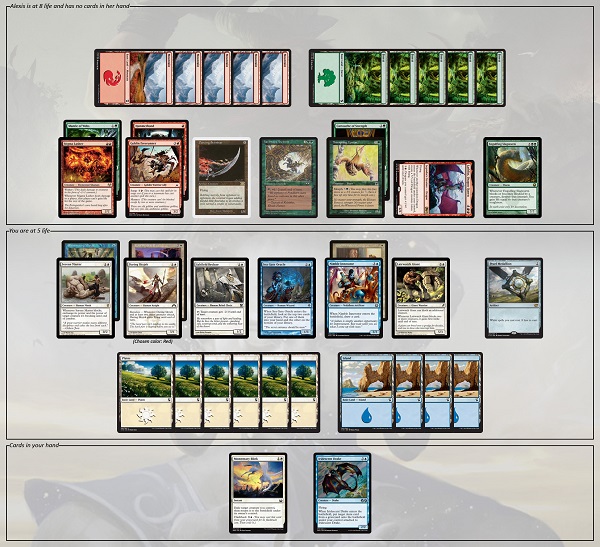 You currently have no Aura cards in your graveyard.

Alexis is at 8 life and has no cards in her hand. She has the following cards in play:

Alexis currently has no Aura cards in her graveyard.

If you think you've got a great solution in mind, don't put it in the comments! Instead, send it to puzzles@gatheringmagic.com with the subject line "Puzzle - Reinvent Yourself" by 11:59 P.M. EST on Monday, December 10, 2018. We'll include the best ones in next week's article along with the next puzzle!

Last week's narrative got a slight correction to indicate that your opponent's deck doesn't have anything that would disrupt any efforts to run them out of cards. This is an important point, because as Elf 491 writes: "Considering the boardstate, there is no way we can expect to win via damage, and our opponent could quite possibly kill us next turn based on his draw. We need to end the game now, and the only win condition we still have access to is milling our opponent. We have a clear way to do this with the enters-the-battlefield ability on Geralf's Mindcrusher, which we need to activate three times to get rid of exactly fifteen cards in our opponent's library before their draw step."

"The trick is," Addison Fox notes, "we somehow need to bring the Mindcrusher back three times to do it, and Undying only works the first time... right?"

Fortunately, you have an alternate means of reanimating Geralf's Mindcrusher on your side of the table: Shirei, Shizo's Caretaker. The problem, of course, is that Shirei has a very specific trigger condition. So in addition to finding a way to trigger the Mindcrusher's undying ability, you also need to get it down to 1 power or less.

Russell Jones' solution covers this in detail. As it turns out, one of the important parts of your victory is sitting on your opponent's side:

A "shuffle your graveyard into your library" trigger can indeed disrupt your plan here, which is why Mari has to establish that her opponent doesn't have those effects available. One more minor nitpick is that even though you can have Grapeshot Catapult ping the Ferocidons in order to let you sacrifice Death's-Head Buzzard, it's probably not best to do so as this might result in the Ferocidons dying before your end step.

"So it turns out that Mari can start her victory by casting that card in her hand right away," Michael Feldman notes."It seemed it was obvious when you thought 'I see a Bad Moon a-rising'. Meanwhile, Argus should have been thinking 'I see trouble on the way', because no matter how often those goblin pirates of his say 'I see earthquakes and lightnin'', those cards will run out before Mari says 'I see bad times today'.

"Seriously, though, I was surprised at the large number of concrete choices/steps in this one. That said, the only real difficulty was realizing that I had to activate undying before whittling down the Mindcrusher's power. It's a nice touch, forcing us to pump up before deflating."