Login
0 Item
Advanced Search
Sign In
Create Account
"...But that's actually a distraction from their real long-term goal, which is to gather information on everyone who plays with the new card stock," Jerry says. "I'll cast a Dimir Guildmage now."

Ultimate Masters has made quite a splash at your local game store, with double the expected number of patrons showing up for your Saturday release tournament. Despite the usual grumblings about price, everyone seems to want to have a try at the Limited environment. Personally, you think that that should be enough for one or two weeks of demand.

Your opponent this round is Jerry, who fits a certain stereotype like a glove. Unfortunately, that stereotype apparently involves t-shirts with inappropriate slogans, a complete ignorance of deodorant, and a profound belief in conspiracy theories - and you would like nothing more than to escape your game with him right now.

"So," you say, wrinkling your nose, "are you attacking?"

"Only if I draw something good," Jerry says, activating the first ability on his Guildmage. He draws a card, grins, and then lays a Marang River Prowler on the table. "That should be enough to put you on a clock," he notes.

"Might want to rethink that," you say, "considering that I'm still at seven life." Despite having drafted a nice sacrifice-themed deck with Bloodflow Connoisseur and Magmaw, the only component you've drawn and played so far this game is a Furnace Celebration. You'd have crosshairs drawn on a ton of targets right now if only you had a ready sacrifice outlet available.

"Eh," Jerry says dismissively. "You do know that some of the cards are weighted, right? What Wizards does is that they add this little strip of film to printings of the good rares and uncommons, and it throws off the sequencing for those cards whenever you shuffle. And you get bad topdecks as a result."

"Maybe," you say, making sure that your expression doesn't change.

"Only the so-called 'pros' are able to get around it," Jerry explains. "You see, there are some people who have this ability to detect really small differences in weight. So a bunch of them start playing and realize that they can make sure they draw their good cards earlier than anyone else. That's where the professional circuit comes from."

"Really," you say, shaking your head. You don't know if your opponent is trying to distract you, or is simply oblivious to your reactions.

"Every time a major event comes around," Jerry says, "it's the same people who show up at the top tables. And they all have special shuffling techniques. Just think about it."

"Can you please end your turn so that we can get on with this game?"

"Already did that," Jerry says. "I thought you noticed."

Regardless of what Jerry might think, you most definitely did not hear him announce the end of his turn. "I'll tap my Thermo-Alchemist in response to deal 1 damage to you," you say, and Jerry makes the corresponding adjustment to his life total.

During the last few minutes of Jerry's spiel, you took a little time to assess your situation: Glen Elendra Archmage is the major thorn in your side right now, seeing that it's preventing you from casting both of the noncreature spells in your hand. You're going to need a good draw - perhaps a creature of some sort - to try and stay in this game.

Surprisingly, your draw this turn is a Grave Scrabbler, and you think you can work with that. Jerry might have you on a three- or four-turn clock right now, but there might be a way for you to end this match early and hopefully get far away from him as soon as possible.

It is the start of your first main phase. Defeat Jerry before the beginning of his next combat phase. 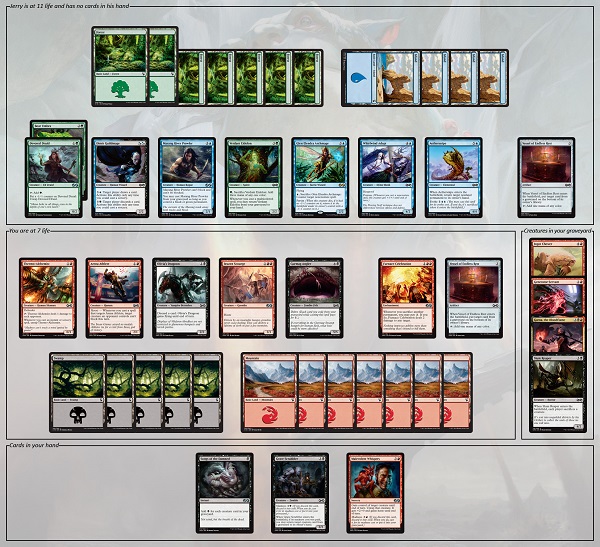 You currently have the following creature cards in your graveyard:

Jerry is at 11 life and has no cards in his hand. He has the following cards in play:

If you think you've got a great solution in mind, don't put it in the comments! Instead, send it to puzzles@gatheringmagic.com with the subject line "Puzzle -Subliminal Messaging" by 11:59 P.M. EST on Monday, December 17, 2018. We'll include the best ones in next week's article along with the next puzzle!

"Our opponent is at 8 life, we have a single, zero-power attacker with flying, and the ground is quite clogged up, making non-flying attacks not profitable," Paul Simpson writes."We need to get rid of the two creatures that can block flyers, and we also need to add some more power to the board.

"Fortunately we have an iridescent value engine in the form of Drake (insert pop culture reference here). To get this value, we can move our auras around, and use one of them to knock auras off our opponent's creatures."

"We cannot attack on the ground," Paul Gersberg continues, "or otherwise the Engulfing Slagwurm would make the kill impossible. There are nevertheless two flying blockers in the form of a weird flying sword (Dancing Scimitar) and a furious elemental (Stigma Lasher).

"The go-to for us is the Daring Skyjek, but we need two more attackers to get him flying. The Lairwatch Giant is a good way of providing an extra 5 damage, so we can give him the Shimmering Wings. All that's left is to prevent the two opposing creatures from blocking."

It turns out that Floating Shield's ability to knock auras off your opponent's creatures is an important factor in making sure your attackers can get through for damage. Greg Dreher's solution elaborates on this:

Ultimately, the protection ability that Floating Shield grants to your Iridescent Drake doesn't matter. What matters is the color you choose for the Shield's sacrifice ability!

"If Alexis had one more flying blocker," Addison Fox observes, "we could still win this way. This solution leaves us with

left, which is just enough to flashback Momentary Blink (which is still White even when the Blue flashback cost is paid), letting us return Hammerhand a second time by re-flickering the Drake. We also don't need to attack with Skyjek, but there's no reason not to either.

For that matter, this interesting interaction between Iridescent Drake, Hammerhand, and Momentary Blink makes one variation possible. Ryou Niji covers this one as follows:

Considering that your opponent is only at 8 life, you only actually need Lairwatch Giant and either the Skyjek or the Drake to get through for damage. This means that, instead of attacking with the Iridescent Drake, you could attack with any other creature to trigger Daring Skyjek's ability... if it weren't for the Engulfing Slagwurm.

"However," Hyman Rosen writes, "this solution gives us enough mana to cast Momentary Blink a second time via flashback. We could therefore blink the Iridescent Drake a second time to bring Hammerhand back and make Engulfing Slagwurm unable to block." And from there, your third attacker could be any available creature you wish.