As people we live our lives through social contracts, most of them being unstated. There are a great many unspoken courtesies we afford one another. It can be as simple as holding a door for someone or not talking to strangers in the bathroom. While every now and then it can be amusing to offer a handshake at the urinal, in general it can be considered poor form to do so (particularly while offering to let them call you "the admiral.") That being said, Magic also has various social contracts and I think itâs about time they were put on paper, especially those pertaining to EDH. Please note that while Iâm offering my opinion and items that seems to work for our playgroup, this is not definitive. If your group disagrees and everyone is happier with your way then thatâs awesome! We want people playing magic and having fun and if your way is whatâs doing it then donât change a thing.

There are two important things I want to focus on, the rules for the format and the unwritten rules for fun of the format. Both are critical for fun, but only one is clearly stated and I want to change that today.

Elder Dragon Highlander has a suggested banned list. While a few of these cards are obvious (Fastbond), some seem fair depending on who you talk to (Library of Alexandria). Each card on the list has been banned for a specific reason apparent to the rules committee. While I cannot and will not speculate on the reasons behind each banning, I can bet that the reason for a few of the cards will be the fact that they stifle fun.

Fun is sort of a relative term. Spikes have fun winning, Timmy has fun casting gigantic splashy cards, and Johnny has fun exploring interactions. That isn't to say that Timmy and Johnny don't enjoy winning, because certainly no one likes to be everyone's punching bag all the time. Itâs just that Timmy and Johnny can take not winning if when they do sip from the sweet chalice of victory they get to chug. Timmy and Johnny want to win in a way that makes their opponents say "Wow!"

The question that needs to be asked is, how can be balance the wanting to win of the Spikes with the splash of their slightly less competitive counterparts? There have been a few proposed solutions, and Iâd like to take a look at them now.

The official EDH pages have suggested the idea of sideboards, with everyone laying out their general ahead of time and being given a chance to sideboard before each game. The problem with that idea is that it doesnât really get to the root of the problem. If players arenât having fun then forcing them to change their decks is probably just going to breed more ill feelings.

The method I prefer for making EDH, and especially tournament EDH, a little more fun is that of the merit based system. Armada Games uses such a system to great success. Each week items are randomly added and removed to prevent players from "meta-gaming" to the list. Players still get points for winning a pod and for eliminating other players, but might lose overall if a Timmy or Johnny player can pull off their epic combo. Such a system rewards creativity while also rewarding overall deck effectiveness.

Non-tournament EDH is a little bit trickier. Part of the problem comes in when we look at some of the language in the official EDH forums. The official EDH forums use the list as a suggestion for cards to be avoided when building a deck. Many players tend to use this list as merely a suggestion, preferring to build their decks the way they choose. This can cause some unhappiness when encountering a group for the first time. My suggestion is to create a banned/restricted list your store can agree on and post it clearly. Post it on websites, on the walls and anywhere you promote your league. New players can see this list and modify their decks accordingly. 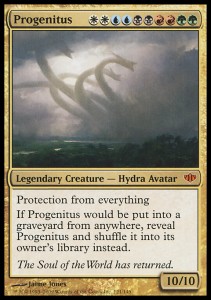 Another problem that can happen in non-tournament EDH is a breach of the social contract. Our local group is a fairly casual bunch. We play big splashy decks that tend to have a good time. Progenitus cascades into big fun stuff. Todd "Jazzhands/Woody" Palmer plays Rith, the Awakener and tons of tokens. Sheldon literally plays a different deck each week. Itâs not uncommon to see Warp World getting thrown around the table. We have a fairly well known social contract. It's not that combo is banned, we just don't find combo very fun. How then do we deal with players who choose combo?

Sheldon Menery recently wrote an article about his list of 25 most un-fun cards for EDH. Unsurprisingly, many of them were combo enablers. Combo doesn't make you an automatic leper at our group, but the game usually ends. After a few games of having someone combo out we usually just concede the game to them and "play for second." Elder Dragon Highlander as a format is easily broken. Having access to a large number of tutors and a large amount of time allows ample time for combos to go off. The only thing keeping combos in check is really the social contract of making sure everyone has fun.

Additionally, I have heard from a few friends that their local store is sticking dogmatically to the EDH site. I'm here to let you know that it's ok to deviate! Create house rules! Make your own banned/restricted list! Do whatever will make the game fun for everyone. The official EDH mulligan is the modified Paris mulligan (or the Britney mulligan). One of the creators of the format plays at our local store and we use the Gis mulligan. Furthermore, we play using Planechase, something else not on the official EDH site.

The most important thing about EDH should be having fun and creating a great social atmosphere. Everything should work toward that goal and everyone needs to be on the same page. If players don't understand the implicit social contract then make it implicit! Sometimes the best way to get your point across is to poke someone with it. I hope that my article helps some stores loosen up and inspires some other stores to try the awesome chaos that is EDH. If you need help setting up a league or have any questions in general make sure to contact me and I'll be glad to help you.

And now to the last piece of business, the article contest. I have received over 70 entries and finding a single winner was understandably difficult. Without further ado, I have selected a quote by Kyle Erickson. Kyle sent me a few suggestions and my favorite is "100 reasons to play magic." I feel like that really captures everything I believe EDH should be. Before I discovered EDH I was getting burned out on competitive magic. Standard was becoming stale and there were no other formats being played in my area. Then I discovered EDH and everything changed. EDH reminded me that Magic could be wacky and fun and didnât need to be played with solely the win in mind.

Until next time, this is Ben McDole giving you 100 reasons to play Magic!