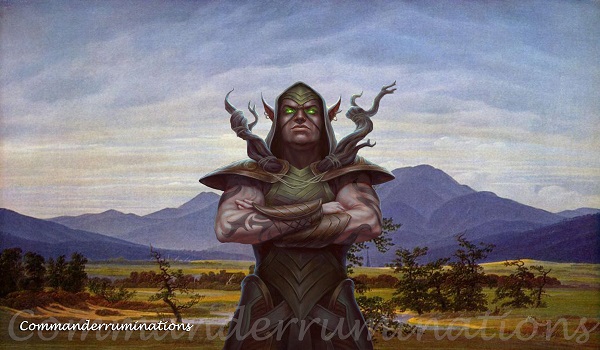 As the commander writers here at CoolStuffInc.com, have been working through some of the legendary creatures from Commander Legends, I was excited to find that today's pick hadn't yet been claimed - we're going to look at an aggro and a combo Golgari Elf deck, both led by Abomination of Llanowar. The former is a budget build, and the latter will be quite close to a deck I've been playing off and on for the past few months.

This Elf Horror has vigilance, menace and a power and toughness equal to the combined number of Elves on my battlefield and in my graveyard. It's got the chance to get pretty big, given how many Elves a good Elfball deck can put onto the battlefield. If an opponent wipes the board, Abomination of Llanowar will come back just as big, if not bigger than before it died.

Adding Black to a tribe that in Commander is often just mono-Green gives the ability to run the best, broadest, most efficient tutors ever printed. Green's tutors are generally creature tutors, but often the key to unlocking the power of an Elf deck lies in playing just the right noncreature spell or land. If you doubt that, I suspect you haven't been in a game against an "Elfball" deck and felt the sense of impending doom that hits the table when they put a Gaea's Cradle or even just a Coat of Arms down onto the battlefield.

Elves can really do work in our format, and they aren't even limited to a single playstyle. You can play aggro Elves with success and you can even edge into fringe cEDH territory with combo decks built around singularly powerful Elves.

When faced with the challenge of writing about Abomination of Llanowar I had to think about what this Elf Horror brings to the game. I also had to think about how one might build this deck on a budget, because my personal Golgari Elves deck falls at the high end of both the power and budget spectrum.

This list is loaded up with Elves, as any good Elf deck should be. The key is to plan around what Abomination of Llanowar brings to the game, and that looks to be a pretty decent power and toughness. If we want to win, we'll want to draw cards. Since we're both going wide and going tall, we'll run a healthy list of card draw staples along with a few that care about having a big creature.

Some of these require us to sacrifice a creature, but setting up for a big turn sometimes requires a sacrifice. If we've got 10 Elves and sacrifice our commander but draw into Coat of Arms, Beastmaster Ascension or Overwhelming Stampede, it will be worth it. At 3 mana, there's every reason to think Abomination won't be gone for long. Greater Good is a particularly good fit for this commander, as we can discard Elves and they'll still help make our commander bigger.

Kaldheim gave Golgari Elves a lot of great new cards. Harald, King of Skemfar will help us draw into more Elves, or even a "Tyvar card," which is also in the deck. Skemfar Avenger could backfire, but card draw is incredibly important so I'd run this until enough regrets have piled up to switch it out. If your meta is Wrath-heavy, it might not be worth running, but Skemfar Shadowsage could help with that all important life total. I'm more interested in Shadowsage's "each opponent loses X life" ability, but sometimes a little lifegain is just what you need.

Any deck you find online should be adjusted to your meta, and this is no exception. If you play against a lot of decks with flyers, you might consider throwing in Bower Passage and Dense Canopy or you might just run cards like Whirlwind or Whiptongue Hydra. If you run into a lot of boardwipes don't just drop out Skemfar Avenger - also throw in Patriarch's Bidding, Twilight's Call and ways to bring your army back out of the graveyard. Rise of the Dark Realms might even make sense if you don't mind winning on easy mode.

This list is a relatively fair, relatively casual aggro Elves list. It's affordable and it should be able to pack a real punch. If it looks like it could benefit from a Craterhoof Behemoth, you're not wrong but I was trying to keep the budget pretty low.

You can push up the budget of an Elf deck fairly easily, but if I was going to break the bank on Abomination of Llanowar I'd probably look to make it a combo deck.

My first step into playing Elves was with Marwyn, the Nurturer. If she gets enough +1/+1 counters on her, you can pair her up with Umbral Mantle, Staff of Domination or Sword of the Paruns to make infinite mana. The beauty of Marwyn is that not only do you have a combo piece in the command zone - you also have redundancy. Priest of Titania, Elvish Archdruid and Selvala, Heart of the Wilds can all step in for Marwyn given the right circumstances.

You might wonder why I didn't just play Selvala, as "Selvala Brostorm" is a well-known cEDH deck. I like to do my own thing, and when I built Marwyn I did it completely from scratch with no real outside resources to help me. Also, I cracked a foil Marwyn out of a booster pack and took it as a sign that I needed to build her.

When I started seeing more and more Golgari Elves printed in recent years I started experimenting with Abzal Elves, first under Nethroi, Apex of Death and then under a few different partner pairings. Marwyn hadn't gotten worse, but I wanted to do something interesting around my high-powered Marwyn core.

Jarad, Golgari Lich Lord will let me sacrifice a creature I control and he'll cause each opponent to lose life equal to the sacrifices creature's power. With creatures like Abomination of Llanowar or Drove of Elves, that could add up pretty nicely to a heap of life loss. If I'm able to make huge amounts of mana, either with an Elf mana combo, Gaea's Cradle, Elvish Guidance, Itlimoc, Cradle of the Sun or that wonderful pairing of Cabal Coffers and Urborg, Tomb of Yawgmoth, I can use that mana to make a creature huge and then sacrifice it to Jarad.

Infinite or just big mana can also be pumped into Genesis Wave, Genesis Hydra or just Ezuri, Renegade Leader, who appears in both lists and is a fantastic mono-Green aggro Elf commander. Since this list is running lands that can tap for silly amounts of mana, not only am I running Expedition Map and Crop Rotation, I'm also running Argothian Elder in the hopes that a key untap on my Cradle or my Cabal Coffers and Urborg will unlock just enough mana to put me over the top.

The only real problem with this deck when I play Jarad, Golgari Lich Lord in the command zone is that the deck has a single "kill the table" combo that is my go-to play if I'm trying to win the game. This is a good enough list that if I'm playing it at all, I'm probably pulling out all the stops. That means I've got lots of tutors and my first plan is often the same.

I'm running Demonic Tutor and Vampiric Tutor, but I'm also running Fauna Shaman and Survival of the Fittest, because if I can get both Jarad and Phyrexian Devourer out and I've got the mana available, I can kill the table. The trick is to use its ability to exile cards until Devourer's power and toughness are higher than the highest life total among my opponents, holding priority each time rather than letting it die to its "power is 7 or greater" trigger. Once you sacrifice it to Jarad, you should be able to kill the table.

The beauty of this list is that even if you lose half of your deck, there is enough redundancy that you're not necessarily out of the game. Sure, the Phyrexian Devourer play is a nasty one, but if someone hits it with a Krosan Grip, you'll still have all the power of a Marwyn or Selvala combo deck at your disposal. It's possible all your combo pieces will end up exiled, but there are enough in there that it's just as likely that you'll have something to dig for to try to go for the win again.

Did I say that my Jarad deck's "problem" is that its best gameplan with Jarad in the command zone is so effective that the initial gameplay is always the same?

One way to solve that is to put a creature like Abomination of Llanowar in the Command Zone. I wouldn't do that if I was at a really high-powered table, unless I was riding a win streak and wanted to play the deck but tone it down a little. Even with Abomination as the commander, I think this list has more than enough under the hood to really cause problems for high-powered tables.

Can this list in any configuration keep up with top tier cEDH decks? I'd say yes, but that yes comes with a caveat. In Golgari you don't have the level of stack interaction that is the hallmark of modern cEDH gameplay. Sure, you've got a few tricks up your sleeve, but when it comes down to brass tacks, Kess, TNT and Golos will be able to throw around Force of Will, Flusterstorm, Pact of Negation, Swan Song, Chain of Vapor and a dozen other Blue cEDH staples that we simply don't have access to. You can steal the occasional win and you might even do well, but I don't think any Golgari Elves deck will ever quite stand shoulder to shoulder with the very best decks in cEDH.

I loved my Marwyn deck because it was one of those builds that was all mine and it won games at a pretty good rate. So far Jarad has also done quite well. I suspect Abomination of Llanowar might be a great leader for an Elf deck if you wanted to position yourself to be able to pivot to aggro, combo or that wonderful Jarad, Golgari Lich Lord plan of dealing out life loss to all of your opponents at the same time.

If I asked 10 different Commander players what Elf they would use to lead their Golgari Elves deck, I'd probably get at least a half dozen different answers. I might swear by Jarad, but there's a case to be made for Abomination of Llanowar. There are also interesting decks waiting to be built around Belbe, Corrupted Observer, Glissa, the Traitor, Harald, King of Skemfar, Izoni, Thousand-Eyed, Nath of the Gilt-Leaf, Savra, Queen of the Golgari and even Storrev, Devarkin Lich. I like Jarad because I really do like killing tables all at once so nobody has to sit and wait for the next game to start. When your commander just needs one card to pull that off, I'm sold. I also get bored of the same thing game after game, so there's a reasonable chance this deck will move away from Jarad eventually. After all, variety is the spice of life!

What's your favorite Golgari Elf commander? Have I sold you on Jarad, inspired you to give Abomination of Llanowar a try, or am I sleeping on some other multicolored Elf commander I didn't even mention?

That's all I've got for you today. Thanks for reading and I'll see you back here soon!