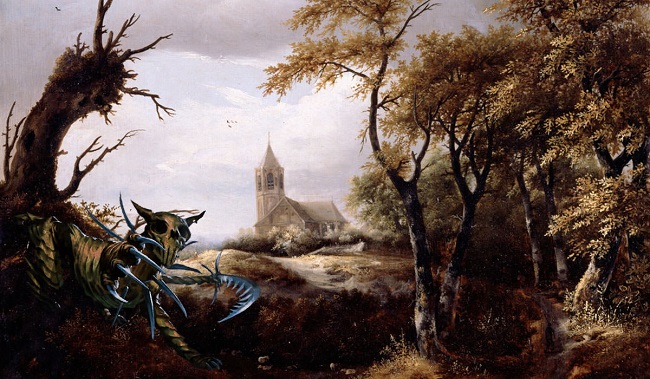 Landscape with a Church by Jacob van Ruisdael (1640's).

It's hard to put into words how important the character of Drizzt Do'Urden is to the lore of Dungeons and Dragons and the Forgotten Realms storylines. I'm well aware that writing a column about Drizzt puts me in the unenviable position of being able to choose cards and strategies that would be completely and utterly wrong for who Drizzt is and how he might best be represented in a Commander deck.

I'll come clean with you. It's particularly hard for me to put into words how important Drizzt is because I am singularly clueless about that character and about the Forgotten Realms. I played Dungeons and Dragons quite a bit... back in the late 1970's. While I have fond memories of the game, I haven't rolled for initiative or attempted a saving throw in over thirty years.

While I might be clueless about what makes Drizzt Do'Urden tick, one look at his Magic card and I was eager to take up the challenge of building around him.

This 3/3 Elf Ranger has double strike and a pet cat. If I wasn't on board after that first bit, I'm not going to pass up the chance to make a 4/1 Green Cat creature token with trample. I might not be up for pronouncing "Guenhwyvar" in front of a crowd, and I might not have any idea what to do with Kitty G, but I have a plan for Drizzt.

Whenever a creature dies, Drizzt will get +1/+1 counters if the creature dying had a higher power. That means I get to build with one of my favorite things in Magic - combat tricks! This might not end up being a particularly high-powered build, but do think it will make for a fun game.

This deck is going to try to win through commander damage. Having double-strike naturally means that already challenging task just got a little easier. That doesn't mean it'll be a cake walk, but if we can get eight +1/+1 counters on Drizzt and make him unblockable we'll be able to knock someone out in one combat. Getting just three +1/+1 counters would put Drizzt at six power and would let us put an opponent on a 2-turn clock.

The big question is how we put those counters on our commander, and that's where the fun comes in.

Cards like Giant Growth and Might of Old Krosa are the kinds of instant speed pump spells that rarely see much play in Commander. You generally want spells that will have an effect beyond just one turn, as you've got multiple opponents and the games can go long. The key with a Drizzt deck is that you'll want to run lots of creature removal so you can pump an opponent's creature, possibly con them into swinging it at someone else and then kill it before the pump wears off. Your tablemates might play big creatures anyways, but if they don't, you'll be happy to be able to help make them bigger.

War Dance seems a bit odd, but if you let it hang around long enough you can sacrifice it and give a creature a nice little bump to its power and toughness. This is an enchantment, not an instant, but it can be triggered at instant speed, which is good enough for our purposes.

The poster child for this effect is probably Berserk. This little instant will double a creature's power and that creature will be destroyed at the beginning of the next end step. It's everything Drizzt wants in a spell, and with the right target to pump he could be getting a nice handful of +1/+1 counters.

A creature with what could be the worst cumulative upkeep trigger in the history of Magic might actually have a home in this deck. Sheltering Ancient will have you put an age counter on it and then give an opponent's creature +1/+1 counters equal to the number of age counters. If you put those +1/+1 counters on the same creature each time and then destroy it when Drizzt is on the field and you want to cash in, it starts to make a lot of sense. This plan might also backfire on you quite badly, but I love taking those kinds of risks. If you're adept at playing the table and making deals you might just be able to load up your commander with counters as an indirect result of playing this odd old Treefolk.

The next piece of this puzzle is removal. I may be running Swords to Plowshares and Path to Exile as answers to indestructible threats, but my real focus has to be on cards that will destroy an opponent's creature, not exile it.

I'm running Generous Gift and Beast Within, as those can deal with a wide variety of problems, but I'm also loaded up with other ways to kill creatures. Afterlife will leave a 1/1 flying spirit behind. Immolating Glare will work on target attacking creature. Valorous Stance is modal and can either destroy target creature with toughness 4 or greater or make target creature indestructible until end of turn. Targeted creature destruction is important for Drizzt and I wish he was in a third color that could give me access to more of those kinds of spells.

I'm running enough boardwipes that it really makes sense to load up on ways to make Drizzt indestructible. It's an inelegant solution, but sometimes protecting Drizzt and blowing up the board will be enough to let us kill someone and put pressure on everyone else to rebuild and defend themselves before they also get shown the door.

This is the kind of deck that you'd really want to adjust to your meta. This list runs a baker's dozen of creatures but I could see a build that loaded up on deathtouch creatures and fight effects able to accomplish what I'm trying to do here with pump and removal. Either one would probably be entertaining, but this deck might struggle against decks that go wide and don't give me enough juicy targets to convert into +1/+1 counters on my commander.

I don't know if there's much point in trying to tune this up for higher powered play. Drizzt isn't in Blue or Black, and this commander doesn't seem to lend itself to a combo build in any obvious ways. The direction I think this deck should be taken is in a way that echoes the extensive lore that so many of you are probably familiar with.

I've thrown in a bunch of cats, but is that right for Drizzt? Are the elves I'm running a fitting choice for mana dorks, or did Drizzt spend his time among humans and stay away from his own kind? If you've got thoughts on how a Drizzt build would look if it were true to the character's lore, I'd love to hear about it in the comments.

If you like casual EDH and enjoy combat tricks, this deck might be right up your alley. I am fond of both, but I don't know how well Drizzt Do'Urden would stand up to more competitive play. This list has a pretty decent amount of removal and protection but it's very much of a first draft. I might suggest throwing in The Ozolith, Forgotten Ancient, Doubling Season, and more cards that care about +1/+1 counters to tune it up, but even with fast mana and a high powered overhaul I wouldn't be overly hopeful playing this deck in a high powered meta.

The reason I should probably be more optimistic about this build is that it is impossible to underestimate the value of removal. If you're able to remove threats, you can survive longer and that should give you the time you need to mount your own threat. When removing an opponent's biggest creature plays into what you want to do anyways, that's fantastic. My only real second-guess about this list is that I probably should have added more card draw tied to combat damage triggers. Native double strike is rare, and is well worth building around.

I've got something of a treat for you next week. I'll be writing about two of the new legendary creatures that care about venturing into dungeons and I'll be wrapping those decklists around an idea that I think might make for a fun new variant on EDH. I'll save the details for next week, but it might be one of the most interesting ideas I've come up with in quite some time.

That's all I've got for now. Thanks for reading and I'll see you next week!