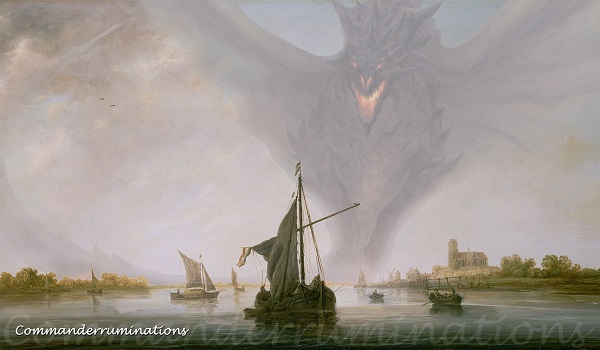 A View of the Maas at Dordrecht by Aelbert Cuyp (1645). Dragon from Path of Bravery by Chris Rahn.

I've gone a few weeks without putting together any decklists. I'm still somewhat overwhelmed by the sheer number of legendary creatures released in Commander Legends. Not only are there lots of mono-colored partners, we've got a bunch of new multicolored legendary creatures and we've got reprints of some great old commanders to build around.

Today centers around the kind of challenge that drew me to this format years ago. I love the excitement of opening up a new pack of cards and finding ones I can brew around to find a deck I never expected with new and intriguing lines of play. The cynic in me whispers that lots of new decks are just minor variations on melodies I've played many times before, but I still love the thrill of possibility that comes from digging into new sets and building around new legendary creatures.

I won't be opening the first of the two Commander Legends boxes I'm getting for another week. I'm picking one up from NexGen Comics, my "home" LGS in Pelham, New Hampshire, because times are tough and I want to do what I can to try to keep them in business. I'm picking up my second box through this website because they're also a huge part of my life and I've pretty much never disappointed when I buy cards through CoolStuffInc. I've never bought two boxes of a set before but if there was ever a set to dig that deep into, I figure Commander Legends is the one.

While I wasn't getting my box yet, I decided to head over to NexGen Comics to buy a single pack on prerelease weekend. My plan was simple: I would crack a pack and resolve to build a deck around whatever legendary creatures I was lucky enough to pull. I almost left the store empty-handed, but the guys were able to dig one up and I headed home with a new adventure ready to be unwrapped.

I found myself with a new promo Sengir, the Dark Baron as a thank you for the work I've done to help the store out over the years, but I had resolved to build around the cards in my pack. I carefully pulled open the shiny purple wrapper and dug into its contents. There were lots of reprints that I've already got piled up in bulk boxes, but there were a few new cards that caught my eye. Azure Fleet Admiral not only brings monarch into the game but gives you a way to steal it back and will go right into my Kenrith, the Returned King Pirate Tribal deck, possibly alongside Path of Ancestry. My first rare was Jeska's Will, but a smile crept across my face when I counted not one, not two, but three legendary creatures at the back of my little stack of cards.

I wound up with two partners and an etched foil powerhouse of a legendary creature I've never actually owned. Zur the Enchanter is a question with dozens if not hundreds of possible answers, but Zur isn't exactly new territory. The combination of Kediss, Emberclaw Familiar and Slurrk, All-Ingesting is the pairing that I was fated to build around for today's column.

The trick to building around partners is fairly simple. You want to identify the ways each partner will gain an advantage and you see if you can have them work together. Ideally, you want the end result to be more than the sum of what the two cards are bringing into the brew, but that isn't always easy.

Kediss gives us a really powerful way to push damage out to all of our opponents at once, provided we can get at least one of our commanders to do combat damage to an opponent. Slurrk gives us access to green and can open up a strategy around +1/+1 counters. These two ingredients might not be peanut butter and jelly, but they also aren't liver and onions. There's no really obvious synergy here, but with a little digging I'm curious to see what kind of trouble we can get up to with Kediss and Slurrk.

I think our angle has to be to use Kediss to push damage out to the whole table all at once and the source of that damage will be Slurrk. A subtheme with creatures that have +1/+1 counters makes sense so we can get something more out of Slurrk, but that big boy's greatest contribution will be to let us ramp and to be our main threat on the battlefield. Slurrk starts out as a 5/5 and can get stronger. Slurrk's casting cost of 6 CMC is a built-in limitation that will probably rule out this being a high power, fast deck. That doesn't mean it can't be fun. Ramping and building into a decent battlefield, playing Slurrk, giving him evasion, playing Kediss and whopping the table for a bunch of damage might not be a cEDH game plan but in the right meta it should be fun and might even win a few games.

I'm going to pass over ramp and removal and get right to the fun stuff. We have to find a way to get Slurrk through blockers easily and consistently, so I need an assortment of ways to make him unblockable.

There's a reasonable chance I'll be able to give Slurrk some type of landwalk or make him unblockable in some other way. If I have to resort to Whispersilk Cloak, I'll just work around the shroud that comes with that piece of equipment.

I'm leaving out Swiftfoot Boots and Lightning Greaves, but I could easily see going back and adding them in if this deck had issues with removal. I tend to think of decks where the commanders are hugely dangerous as being where you run your boots and greaves and I just don't find Kediss and Slurrk that scary. I'd be happy to be wrong about that.

If my main plan is to do damage with Slurrk, I'm going to want to make him a bigger threat than just a 5/5. I'm building around a +1/+1 counters theme, so I'm going to lean heavily on Green.

These guys, along with Predatory Hunger and Curse of Predation, can give me a trickle of +1/+1 counters, but I'll want some ways to add a whole lot of counters at once.

Beyond adding +1/+1 counters, I'm also hoping to occasionally double my commander's power. God-Eternal Rhonas makes an appearance in today's list, along with some other familiar faces.

I'm even running Berserk for those occasional times where doubling the damage Slurrk can do will kill the table. Berserk will kill the creature it targets at the next end step, making it a neat removal option if used on a creature that isn't attacking me. If I use it on Slurrk, I'll probably want to save it for when it will end the game.

It's Easy Being Green

As I put together today's list it became apparent building around +1/+1 counters didn't give me a lot of reasons to build an evenly balanced Gruul deck. Green cares a lot about +1/+1 counters. Red, not so much.

There are a ton of options in Green to make the most of this deck's theme and if we lean more heavily towards a single color that sets us up to be able to squeeze value out of the devotion mechanic.

There are good cards in Red, but leaning this heavily towards Green sets us up to be able to always be in the right colors for early green ramp spells, and we probably won't need Kediss on the field until we're ready to swing with Slurrk. That means I should be able to sandbag my little Elemental Lizard until later in the game rather than putting Kediss out early.

I'll be the first to admit that dropping Red out of this deck's game plan was not something I expected to do. It removes Moraug, Fury of Akoum and a variety of extra combat step spells from our options, but those don't have any direct synergy with our commanders beyond just wanting to go to combat. Going so deeply into Green does give us a lot of removal options which should help this deck have a level of resiliency that should allow it to deal with stronger tables.

The dream of getting Slurrk out, putting another 5 +1/+1 counters on with Increasing Savagery and then hitting someone with both it and a Kalonian Hydra, maybe with a Berserk thrown in before damage so the end result is 40 is the kind of thing this deck is built for. I'm not suggesting you're going to pull that off in every game, but when I build a deck like this I've always got that ideal scenario in mind. Sometimes I eventually pull it off, and sometimes I pull the deck apart before it fulfills its ultimate purpose of doing something truly ridiculous.

While it's undeniable that Commander Legends is an exciting set and I'm going to be building a bunch of new decks over the coming months - I'm not yet sure I'm going to build Kediss and Slurrk in paper. Today's column was an exercise in brainstorming - in part because I couldn't find a spare Forgotten Ancient in my rare binder, and in part because I was a little pressed for time. I've got a lot of what I'd need, but I'm also just two days away from opening a box of Commander Legends. I expect I'm going to be swimming in ideas for what to build next and I have a funny feeling I'm going to open up some even more interesting legendary creatures and pairings in those packs.

As always, if there is a commander or a pairing you'd like to see me do a deep dive on, please let me know in the comments. I'll likely write about one of the decks I'm building but I'm always happy to hear your thoughts.

If you're in the States, I hope the fallout from our quadrennial political passion play finds you in a good place, and that you're planning on having as safe a Thanksgiving as possible. Wear a mask. Be safe. Make good choices.

That's all I've got for you today. Thanks for reading and I'll see you back here next week!