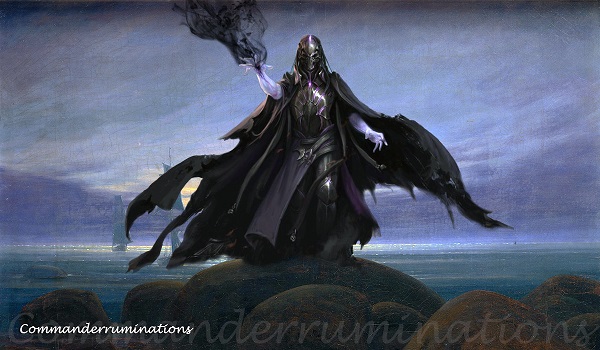 When I first decided to write about Timothar, Baron of Bats, I'll be the first to admit that I was lured in by his swarthy good looks, his brooding demeanor and the fact that he makes me, you and everyone else think of Batman. I could have paraded out a bat-focused tribal build or even loaded up on equipment. I'd likely have tried to explain why Kusari-Gama and Grappling Hook make sense, or why some other artifact is the perfect stand-in for a "Batarang".

That would have been a fun column, but it's also what dozens of other deckbuilders have already done. I love those kinds of decks, but I want to see if Timothar, Baron of Bats can be broken or at least turned into a strong, fun, capable EDH deck. I think it can. Let's turn on that Bat-Signal and summon today's hero.

This Vampire Noble has the ward keyword, requiring that any opponent wanting to target Timothar must discard a card to pay its ward cost. That's a compelling reason to run a ton of discard effects, but that's not my style. Fortunately, this 4/4 has some other tricks up his sleeve.

Whenever another nontoken Vampire I control dies, I can pay 1 and exile it. I can then create a 1/1 Black Bat creature token with flying that I can swing at an opponent and if it deals combat damage I can sacrifice it to return the exiled card to the battlefield tapped.

I don't see a combo deck with Timothar at the helm, and I don't see a fast or even high-powered deck here. Timothar costs six mana in a color that can struggle to ramp, so I think we're looking at a mid-powered deck with an aristocrats subtheme and a focus on trying to make the most of any enter the battlefield triggers I can squeeze out of his supporting cast.

Timothar's most important ability revolves around other vampires under my control so it makes a certain amount of sense to load up on vampires. I can recover from a boardwipe pretty well if all my vampires turn into bats and can turn back into vampires by doing combat damage to an opponent. It's not a foolproof plan, but it's a pretty good way to weather a wrath.

Blood Artist, Falkenrath Noble and Vindictive Vampire can turn creature deaths into life loss for my opponents and lifegain for me. Nirkana Revenant is about as much of an auto-include in a mono-Black vampire deck as you can get. Both it and Crypt Ghast will give me an additional Black mana whenever I tap a swamp.

Even if I'm going to exile a Vampire when it dies to make a Bat, that creature will still hit the graveyard. That means Kalastria Highborn can let me pay a Black mana to have an opponent lose 2 life and for me to gain 2 life. That's not a lot, but that kind of synergy can turn okay decks into good decks and good decks into slightly more good decks.

A deck that may occasionally want to see its Vampires die will want someone like Cordial Vampire hanging around. He'll put +1/+1 counters on my other vampires, turning small threats into slightly less small threats. Again, these aren't backbreaking plays, but they are how this deck can try to punch above its weight. If we've got enough vampires on the field, a Vampire Knight like Sanctum Seeker can turn attacking Vampires into yet more life loss for my opponents and life gain for me.

Vampires dying, making Bats and turning back into Vampires is fun and all, but I've got bigger plans. I want this deck to have a plan, and like all of my favorite decks, the plan must be vaguely unrealistic yet with enough potential to win games to make me utterly incapable of resisting it.

Yes, my friends, there is a conspiracy afoot.

The first step is simple. I need to make all my creatures into Vampires. Conspiracy can make all of my creatures into Vampires even if they aren't currently on the battlefield. While I'll be naming Vampire when I play Conspiracy, Maskwood Nexus will take it to another level and give them all creature types. Mephidross Vampire will only affect creatures I control, but that's all I need. Timothar cares about my Vampires dying and they'll only be dying from the battlefield.

Sacrifice outlets are going to be one way I can send my Vamps and pseudo-Vamps to the bin. Viscera Seer, Bloodflow Connoisseur, Bloodthrone Vampire, Vampire Aristocrat, and Indulgent Aristocrat are all Vampire sacrifice outlets, and they are joined by Carrion Feeder, Priest of Forgotten Gods and Whisper, Blood Liturgist. There's no such thing as too many sacrifice outlets in a deck that has sacrificing creatures as a key part of its game plan.

I'm running Ashnod's Altar, Phyrexian Altar and Altar of Dementia as well, as those will survive boardwipes and provide a little extra value as well. Sidisi, Undead Vizier can exploit a creature when it enters the battlefield to let me tutor up a card. If I'm already turning Sidisi into a Vampire, I can have him exploit himself, pay 1 mana, die and get replaced by a Bat token, and then do it again after the Bat does combat damage to an opponent.

If looping Sidisi, Undead Vizier sounds like fun, Gonti, Lord of Luxury should also appeal to you. Gonti will let you exile four cards off of the top of an opponent's deck and you get to exile one and play it, spending mana of any type. It's great value, and if you can catch an opponent after they tutored a card to the top of their library, even better.

Gray Merchant of Asphodel is simply one of the strongest Black cards ever printed. All that life I might lose from cards like Night's Whisper or Toxic Deluge can get gained back with even a single Gray Merchant. If I can do it several times in a mono-Black deck I'll be in a pretty good position to push for a win. Massacre Wurm might not be able to deal with big threats, but a few Massacre Wurm triggers could easily kill an Elves or Goblins player if they've managed to rebuild after the first time Wurm hit the field.

Ravenous Chupacabra will be happy to jump in where Massacre Wurm falls short, taking out even the scariest of big creatures provided they aren't indestructible. Sepulchral Primordial will put a creature from each of my opponents' graveyards onto the battlefield under my control. Rune-Scarred Demon will tutor up a card for a paltry 7 mana. These are all powerful (if sometimes overcosted) cards, and my hope is that setting up my little Bat loop will make them backbreaking.

My favorite decks are the kinds that can set up weird, goofy loops and that don't have to restrict themselves to doing their thing only once and only on my turn. This isn't that kind of deck. Having a big board, sacrificing Gray Merchant of Asphodel on the end step before my turn, turning it into a Bat (e.g. exiling it under a Bat), swinging with said Bat, and then sacrificing the Bat to bring Gray Merchant of Asphodel (Gary) back onto the battlefield is pretty convoluted. If I'm playing at a slow enough table where I have the time to set up and execute my Bat loop a few times with a good payoff, I should be able to pressure my opponents and maybe even win a game or two.

This deck has other ways to kill my opponents. Vorpal Sword can be attached to a Bat pretty easily and any opponent without reach or flying blockers had better hope I don't have eight more mana available to activate it, swing over the top and make them lose the game. I do have to ask myself why I'm not running Nim Deathmantle so that I can set up a more traditional, fast loop. I think there's a place in EDH for slower, less powerful decks and if I ever wanted to speed this up, I'd definitely look to add some faster combo payoffs that can win the game on the spot.

As with most of the decks I share here, this list can and should be tweaked to suit your needs, your playstyle and your meta. If you just can't live without combo, throw in Nim Deathmantle and some payoffs that work with that powerful artifact. If you're in a meta that simply demands more removal, you likely know what removal you prefer and you should drop out a few extraneous creatures and throw in those answers. More lands, faster mana, more card draw, or even that elusive Batarang can all be in your version of this deck, but I definitely think the basic plan of this deck would be a lot of fun to try out.

Over the run-up to the holiday season I'm planning to share a few columns that put a spotlight on some of the commander decks in my personal collection. I've been learning how to do alters over the past year and some of my favorite decks now sport custom art. It's been an amazing experience learning how to paint on Magic cards and I'm looking forward to sharing them with you.

That's all I've got for today. Thanks for reading and I'll see you next week with a look at a few of the decks from my personal collection!