Wizards of the Coast to Overhaul Judge Program

Renton, Wa. â In the wake of the overwhelmingly positive response to the Planeswalker Points program that Wizards recently unveiled, the DCI judge program is next in line to receive an âextreme makeover.â According to a recent press release from the Rules Committee, the changes to the program are intended to encourage a larger number of Magic players to become judges. With that in mind, the requirements for each judge level are being modified, a number of levels are being added, and the levels are being given fun, whimsical names. WotC says they want the program to be âfriendlierâ and less intimidating, and thus have lowered the barriers to entry.

While full details of the program can be found on the DCI website, here are a few examples of the new levels and qualifications:

Have heard of the game of Magic

Have at least one friend or family member who plays Magic

Go inside a card shop where Magic cards are sold

Know what âtappingâ a card is

Purchase one or more booster packs of Magic cards

Play a game of Magic

Understand the steps and phases of a turn

Fall 2012 Magic Set Rumored to Be Based on Russian Mythology

Renton, Wa. â A confidential source inside Wizards says that the set to be released in fall 2012 will be based on Russian mythological stories, heroes, and villains. âA lot of people really loved the Kamigawa block and how it integrated Japanese mythology into the Magic universe,â he says. âWe wanted to try for that same feeling, but without returning to the Japanese influences of Kamigawa.â

Unfortunately, however, development has run into a few roadblocks. âThereâve been a few problems,â says our source, who is on the development team for the set, code-named Romanov. âWe knew we wanted to delve into the rich history of Russian mythology, but once we started development, we realized that we didnât really know much about the subject. All we really know is that Baba Yaga is bad news. One of our researchers found that out in a D&D module from an old Dragon magazine. Also, we can all do pretty good Russian accents. Weâve been playing a lot of Command & Conquer 2âYuriâs Revenge. All in the name of research, of course.â

Our informant indicates that despite the R&D teamâs lack of knowledge, development is too far along to change course. âIf it looks like weâre not going to make our deadline,â he says, âAaron Forsythe told us to just fake it by making up really weird Russian-sounding card names, just like we did for Kamigawa block with Japanese names.

Hurloon Minotaur, whom many old-school Magic players may remember as the de facto âface of Magic,â revealed in a recent interview that he is working hard to get back in shape for what he says is going to be his big comeback. âIâm on my way up,â he told The Today Show. âIâm coming back and no one can stop me. Iâm going to be bigger than Jace, bigger than Garruk, bigger than any of these other droopy-eyed, armless children theyâve been putting out there as the so-called ambassadors of Magic.â 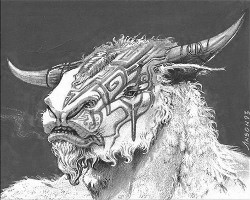 Mr. Minotaur has recently given several bizarre interviews to news outlets in which heâs talked about how well his career is going, how successful he is, and how nothing can kill him. Sources inside Wizards of the Coast, however, say that there is no truth to Mr. Minotaurâs claims that he is returning as the face of Magic. Several members of the current R&D team, in fact, have never even met him.

Many have pointed to his erratic and seemingly unstable behavior, suggesting that he might be under the influence of illegal substances. âI am on a drug,â he said in one interview in response to those allegations. âItâs called âHurloon Minotaur.â Itâs not available. If you try it once, you will die. Your face will melt off and your children will weep over your exploded body.â

Mark Rosewater has filed a restraining order against Mr. Minotaur in King County District Court, alleging that Mr. Minotaur has called him at his home hundreds of times, demanding that WotC hire him as Magicâs official spokesperson. âI told him we had moved on,â says Rosewater. âI tried to let him down gently. But he wonât take no for an answer, and somehow he got my home number. Sometimes, he calls sounding depressed. He cries and begs for his old job back. Other times, heâs belligerent. Sometimes, when I answer the phone, he just shouts âWINNING!â and hangs up. I feel sorry for the guy, I really do, but enough is enough.â