Guilds of Ravnica is here, and while not all the art is available yet, some of it is that is relevant to my favorite format, Vintage Artist Constructed. Let's discuss a few pieces that have changed decks for VAC, the Vintage format with the added rule of every card needing to be by one artist, including basic lands.

Today is a quick update, showing low tier decks all getting a recent upgrade into very strong contending decks in the format. 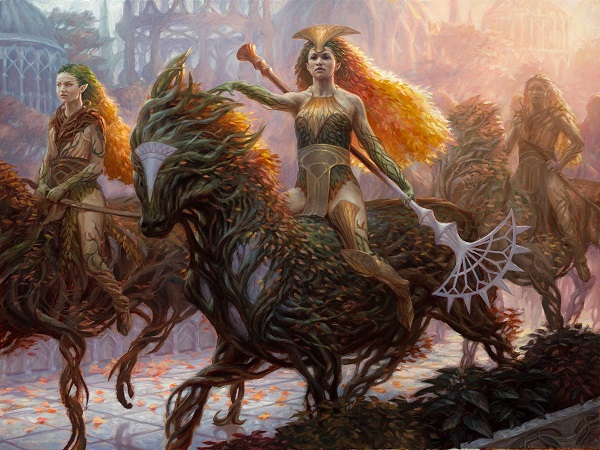 Knight of Autumn by Ryan Pancoast

This is a masterpiece painting. The light on the leaf hair alone explains why this sold for over $6000 at auction. The three dryads are now more warrior based, while keeping the Selesnya lightness of organic strength. They're beautiful and terrifying. No one smiles, everything is serious, and some ish is about to go down - that lance is the spiked one, not the one for crowd control that's dull.

Horses are hard to paint, a modern staple that's brand new demands perfect anatomy from the dryad's hips on horseback, to the musculature of the "steed" that needs stone to show through its vined muscles. I haven't the words to describe how difficult it is to paint a horse, much less a non-horse, with three characters, using dynamic lighting, and also read at a 2x3" card's size.

His deck is now incredible with the Knight of Autumn, so here is an updated list. Stabilizing with the knight only to drop Ranger of Eos for the gamebreaking pair of Mistcutter Hydra is no joke.

Lars Grant-West's deck is finally playable. His Hunt the Weak does work with Imperiosaur and the lightning quick ramp to eight mana is no joke. While other players can make pillow forts for their planeswalkers, having a 3/3 from Terastodon is on curve perfectly. I haven't tested the Vault Skirge with Might of Old Krosa enough yet, but the few times I've seen a ten life swing, it's spicy tech.

What's new for Lars is Rampaging Brontodon from after the new core set and before Guilds of Ravnica, fitting this article perfectly. A no joke 7-drop that swings for over ten damage, with trample, demands an instant removal spell in the format from Wayne Reynolds, an automatic tap down from Blinding Mage of Eric Deschamps, or a tempo bounce from Christopher Moeller in Seal of Removal. I cannot understate how meaningless token decks are to a 12/12 trampling creature (or more) in this format. 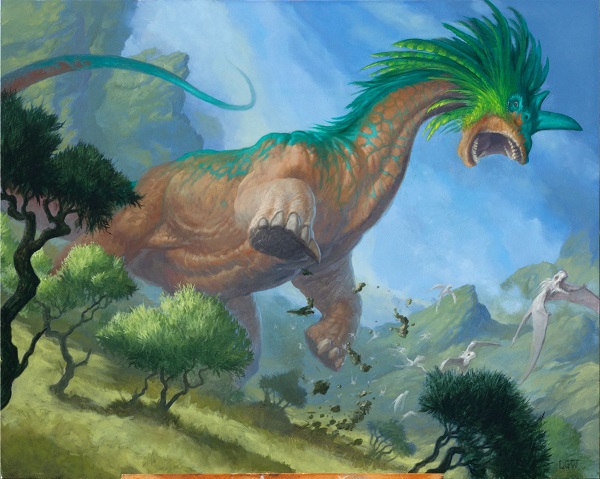 Karl Kopinski's only new change is that Goblin Warchief is still amazing. From the Ashes got bumped for Hell's Thunder speed with a slower deck matchup. Casting Goblin-Dark Dwellers a turn early is enormously helpful, it turns out. 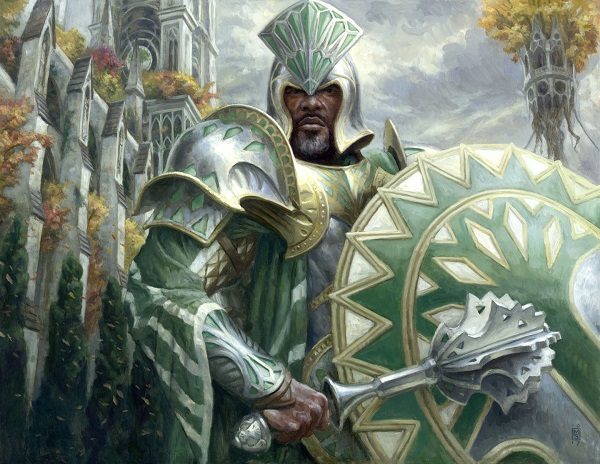 What a lovely Ravnica illustration. It has the characteristic flying buttresses filled with Selesnya trees, the stained glass/enamel guild symbols and a fall hue to it, showing us autumn's dreary skies. His wisps of white beard show his battle hardened nature, reinforced by both a mace and his weathered hand. This is a lovely image and being Selesnya myself, it's exactly what you envision instead of tree huggers. They're the wall, the brute "no" when it comes to battle to protect their own.

Beast Whisperer changed Matt Stewart's Mono-Green deck quite a bit, fixing Green's largest issue-card draw. It also allows an easier Vernadi Shieldmate to bash with the Sword of Light and Shadow. Add in Vigiliance and this card attacks Deschamps and Staples White variants every turn, gaining life because of their token attacks, and killing one thing as a blocker each turn. His deck went from tier 4 to Tier 1 real quick. Try it out on TappedOut and you'll see what I mean with Noble Hierarch. It's not a cheap deck, though it's shockingly powerful. I'm still playing with the Cobbled Wings for Dungrove Elder, but I think Skinshifter is a great 2-drop inclusion instead of four Woodborn Behemoth's to make sure I have a creature to equip on turn four. 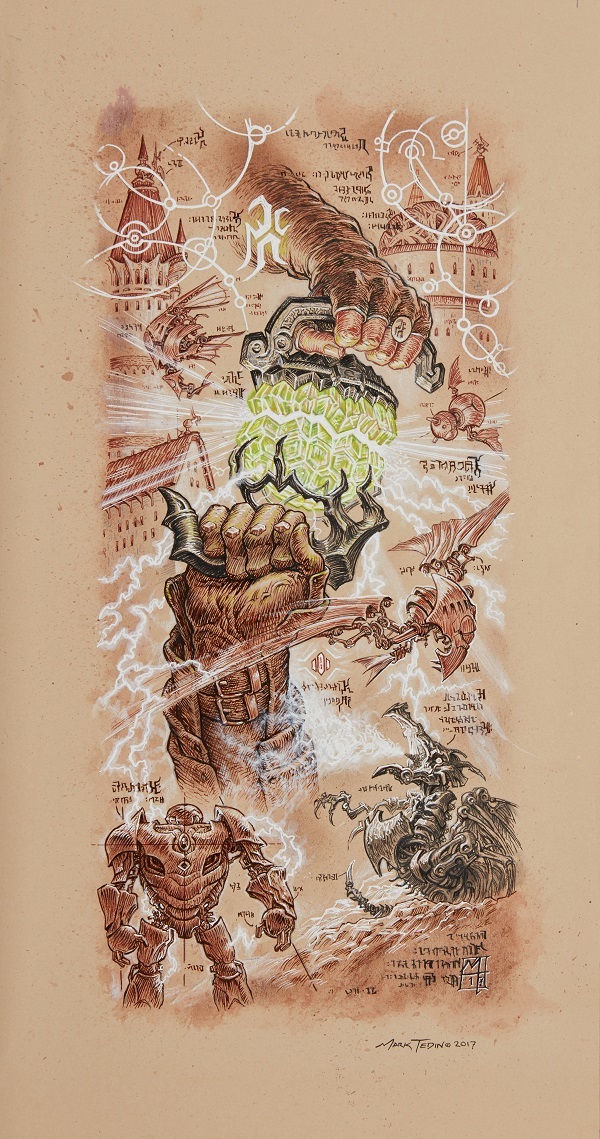 As for Mark Tedin, no update from Guilds of Ravnica, but I'm overdue to mention a quick update on how much his deck has improved from The Antiquities War coming out late game with artifact theft of Chippy's Sphinx or just making Mana Vault a 5/5. I have yet to try going all in on low cost artifacts with The Antiquities War, a preview card SnackTime Podcast had in the past. I think it's shockingly good with Mana Drain, it just needs more card draw to drop 0, 1 and 2 drop cards. It's worth an all-in consideration because it can protect them with countermagic.

And yes, Sword of X and Y will be restricted as soon as Chris Rahn gets a Plains. Aurelia, Exemplar of Justice along with the one-mana Valiant Guard and the two-mana Sighted-Caste Sorcerer means the second and third games with swords can always sideboard to the opposing colors and overwhelming win games.

A tournament report will be coming soon, but let's talk the next time we gather. Deal? Deal.