You arrive at the old manâs study ready for another story, but when you knock, there is no reply. You knock twiceâand then three times to be sure he is not there. No answer comes. You turn to leave, but a shape of white catches your attention in the corner of your eye. You turn back. A crisp, clean square slip of paper is attached to the door just above eye level.

I am unavailable for a short period of time, but I know you will crave a tale while Iâm gone. You are allowed to enter my study, as I have left a book for your reading pleasure. I believe you will find the subject useful in the months to come.

Not quite sure you could ever consider reading pleasurable, you are happy the old man has not gone off and ignored you. With nothing else to do for the evening, you decide to enter and read the book Issar Roon has left you.

Upon admitting yourself, you take a quick glance around the room. Nothing appears to have changed since your last visitâthe bookshelves are arranged in a tidy order, while the rest of the room remains stacked in wild disarray. On the desk are piles of books as usual, but the space in front of the old manâs stool has been cleared away. An aged, brown leather book sits alone, closed. With no hesitation, you move to the stool and open the book.

On the cover sits a title with lettering much more complicated than any lettering has a right to be. You are sure that whoever has written it most likely wished the title to look elaborate and important, but you canât help feeling a sense of unneeded pomp hanging about the edges. Forgetting about the title, you open the book carefully lest you damage the old manâs treasure.

With the multiverse as large and expansive as it is, it comes as no surprise that it contains weapons of all sizes and varieties. Each plane has developed its own styles and methods of creating necessary weapons over centuries and millennia through technology, wizardry, materials, and available resources. Some of the more expansive planes, like Dominaria and Ravnica, have even created weapons unknown to some of their own denizens. Others, such as Alara, are, for all intents and purposes, multiple planes, with each portion developing its weapons without external influence.

This book will attempt to classify and identify as many known weapons as possible. While it is impossible to mention all existing weapons in the multiverse within these pages, I will attempt to create and define categories into which all existing weapons can be placed. These will cover weapons that have existed in the past and have been lost to us, weapons used today on any known plane, and even weapons of the Ã¦therâobjects we know very little about.

Bored with what seems like an introduction and thesis, you flip multiple pages until you find the next section.

Perhaps the most obvious and undoubtedly the most common of weapons in the multiverse are those made by a culture and wielded by hand in battle. We can further break down this section by materials (metal, wood, bone, and so on) and styles (sword, broadsword, pike, bow, throwing knives, slings, ballistae, cannon, pitchforks, and so on). I will attempt to keep these sections short, yet useful.

You can see by the following five pages of introduction that the author has no intention of keeping things short, so you move on. You open the book to almost halfway, hoping that is enough to skip past this section. 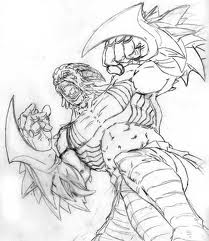 A category that has been much debated by sociologists over the centuries is that of body weapons. Considered to be too natural to be defined as weapons, some say this classification would then require the cataloguing of beasts as well. Others point to the most prominent example of such weapons on an intelligent race in the multiverseâMirrodinâs human races. All of Mirrodinâs races have metal growths, but it is the Vulshok and Auriok who are often mentioned. Naysayers dispute this with the fact that both races often use constructed weapons in battle instead of those naturally available.

A beautifully sketched image lies next in the book. While you find the image and topic intriguing you canât help but be annoyed with the authorâs language and chatter about disputes. You move on to the next section.

Firearms are a very rare weapon in the multiverse. Yet, they seem to be invasive on the planes or land masses that manage to create them. One civilization that would seem to contradict this theory is that of the Thran. Surely, their inventions were not firearms in nature, but sorcery. Still, the weapons were used, looked to be, and acted like firearms as seen among other civilizations. That is a topic best left to a separate essay, and so I will continue on the subject of true firearms. 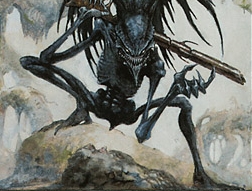 The most popular example is that of Caliman on Dominaria, a land driven by technology. One of its cultures developed firearms only to have them become almost ubiquitous among all of the islandâs culturesâeven the sorcery-wielding ones. They have become as powerful and widely used as magic on a part of a plane that lies at the very center of the multiverse. I know not what that ultimately means, but it is truly troubling.

The only other known source of firearmsâthough rumblings have been heard on very distant planesâwould be the plane known as Terra. Though the invention is relatively young, it has already pervaded many of the planeâs cultures. In a land that knows only the outlying fringes of magic, firearms are the easy choice by those who are after power. It appears to be the opposite of Calimanâs situation, and it will be a wonderful experiment in finding which will gain supremacy in the future.

The Terra narrative ends, and with it your interest. You flip ahead a great many pages.

Beyond mere mortal weapons lies another classification altogetherâweapons made from the Ã¦ther. Those who create such weapons often lie in shadow and secrecy, making it difficult to discern how they are made. What is known, however, is that only the most powerful or intelligent of beings are able to conceive of such horrors. Thanks to their Ã¦theric origins, these weapons are not only dangerous to the average person, but perhaps even more so to mages and wizards.

A great example of the dangers Ã¦ther weapons hold for magical beings would be the mana blade used by Tezzeret during his time as head of the Infinite Consortium. Created by the Church of the Incarnate Soul, it is tuned specifically toward mana. When it strikes any being with magical abilitiesâsorcerer or dryadâit not only cuts flesh, but mana bonds as well.

Ignoring the mental anguish and suffering this can cause a living being for a moment, the practicality of such a device is fiendishly effective. While many magical beings are born with their mana bonds, mages must forge them over time. It takes effort and much traveling for a great wizard to attain mana bonds from more than just one place. To simply cut away that effort is not only demoralizing, but a crippling of his or her abilities. It is said that if one is cut too much by such a blade, one will lose all skill in manipulating the Ã¦therâ.â.â.âif one even survives the natural cuts that come along with it.

Sickenedâand slightly frightenedâby what youâve just read, you decide you have done enough reading for the day. You quickly close the book and retreat from the old manâs study, hoping that he will be here upon your next visit.