Hello folks! I hope that you are having an awesome day today! For Spring Break I am heading to the capital of Ecuador, Quito, for eight days, so I've written this ahead of time! Today, let's build three decks from Kaldheim that could be useful for kitchen table play! Ready?

My first build is inspired by Rootless Yew, a card that made one of my four Top Ten lists. When it dies you can get a creature card with power or toughness 6 or more and then put it into your hand. It's a lot of fun in the sun! The first card I thought of when I saw this was Shield Sphere, an 0/6 defender that costs nothing to play. You could sacrifice the Yew, and then drop the Sphere for nothing, sacrifice it, and keep on trucking. That was pretty cool!

This deck will be built around the second card that came to my mind after looking at the Yew.

And say hello to Krosan Tusker! Its fetchable by the Yew. You can cycle it for two cards, one of which is a land, for 3 mana. It's hard to counter and rarely done. I love the Tusker with the Yew as the former can be used by the latter for that mad card flow. Also don't sleep on Shefet Monitor that can play nicely in this brew as well as a Tusker that's easier to cast but harder to cycle.

Let's get it done!

And there we have it! I added the mono-green loving power of Yeva and I tossed in Cultivate for lands and ramping and Beast Within as an emergency dinghy we can release in case of an issue our foe might enjoy. I have four High Markets here to sacrifice the Yew in case we need to fetch something. Then I added in 8 man-rampers and a suite of expensive dorks to fetch with a Yew's death. Enjoy!

My second deck is built around this God: 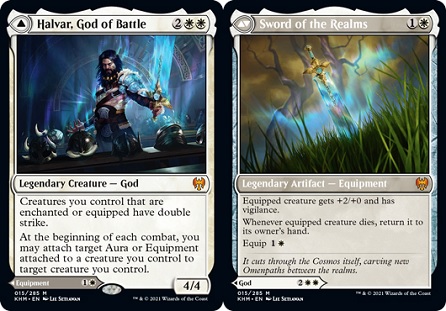 Look at Halvar, God of Battle. As you can see, creatures enchanted or equipped get double strike. Note that there is a key word here that is missing. What is it? "Other!" That means that if Halvar is equipped or enchanted, he'll get double strike as well! That's going to be our key to victory.

Now look at Halvar's second ability. As the beginning of each upkeep you can, for free, attach an Aura or Equipment to a creature you control. This also can work on Halvar proper. So, what piece of equipment leapt to my mind as soon as I read Halvar's ability?

This one! You can drop Colossus Hammer before Halvar arrives to the battlefield with its one-casting cost ability. Then you drop Halvar, wait a turn and then you can attack with a 14/14 double striking God of Battle, who is likely to win the game!

We need a third card in here to really push our combo up. What is it?

Swiftfoot Boots! Drop Halvar before battle, equip with the Boots to give him hexproof and haste. Attack, move the Hammer to him with Halvar's second ability. Win. Note that Lightning Greaves would be faster by a turn but Halvar's ability targets himself so it's a non-combo or a non-bo for short. The hexproof on this can help to protect your key card from death. There is one more piece of equipment I like in this build.

Look at Shadowspear. It's another cheap one-mana drop and you can equip it for 2 mana, which you may want to do. Why? Halvar can be chump-blocked all day long, but if Halvar is a 15/15 double strike, trampling, lifelink machine it's much harder to stop! They can block with their entire team and are likely to die. Shadowspear puts this deck over the edge.

Note that this deck really needs multiple equipment to win! Therefore, I am tossing in Stone Duo. The Mystic Tutors for an Equipment on turn two and as the three needed Equipments cost 1, 1 and 2 you are unlikely to use her free ability. Then you have the Giant which can tap, search your library for an Equipment, put in onto the battlefield and gives you a free equip! You'll do this a lot! You can also equip Hammers for free this way as well so if your Halvar is answered you can still win the game. You could, for example, swing with the 4/4 Giant who stays untapped with his vigilance, then tap two and himself and turn him into a 14/14 which is a big clock. Good stuff!

Want to see my deck? Sure thing!

I tossed in Batterskull as a backup. Just keep 3 mana so you can save it from removal and drop it again to keep up the pressure. If you draw a second Halvar, drop his other side and keep up the pressure! Puresteel Paladin adds to the card advantage that your Stone-makers have. Open the Armory is a backup Equipment Tutor. And that's a deck!

This deck is going to be built around Glorious Protector! Look at our new Standard-legal Restoration Angel. Both cost 4 mana, feature a 3/4 flyer with flash that can flicker a non-Angel. The Angel returns that card immediately making it key for blink builds or saving a dork from death. The Protector can exile an entire team if you wish of non-Angels, but they won't come back until the Protector leaves the battlefield by being exiled, killed, tucked or bounced. It's a delayed win.

We'll combine the Protector with the Hunter of Fiends

This is another key card in our build. When it arrives to the battlefield you exile a creature that someone controls, typically one of your foes'. When the Hunter dies? That creature comes back to the battlefield. I have used effects like this one to exile my key creature right before a mass sweeping effect like a Wrath of God and then I'm the only with a dork after my Wrath killed the Hunter and brought back my best creature. Can you see the interaction of these two dorks? When one arrives to the party, you exile the other, then it heads to the sweet emblem in the sky. Then it triggers its removal and brings back the exiled card, and you keep on going over and over and over again choosing to exile these over and over again each time. You have a loop of creatures entering the battlefield over and over again, but nothing is happening.

Say hello to Impact Tremors. This is the third card in our combo. You can drop it before Fiend Hunter and Glorious Protector arrive on curve later. As each exile and then return happens, you shoot each foe for a damage that is not targeted and thus not stopped by the player having shroud. It's a good card for the puncher!

And that's our combo!

Ready for the deck?

I didn't run any dual lands that cannot be brought into play untapped. Generous Gift can kill anything that might bother us. Tibalt's Trickery is here to counter something that stops our combo, like a counter for the Protector that will win us the game. Ajani's Welcome is a reverse Impact Tremors in case you cannot find it that will give you infinite life as much as you want. With 101 million life your foes will likely concede. Similarly, you can flicker Charming Prince for three life each iteration. Check out Griffin Protector which flies and can be made 1000-power strong if you don't flicker it. You can also make infinite 1/1 Goblin tokens with Mogg War Marshal, you just include the Prince and Marshal with your flickers by your Glorious Protector. That gives you a million damage, life, and dorks that create reliable redundancy for the build. That's important as Red and White have few mass ways to draw into combo pieces or Tutor for non-artifacts or enchantments. That reduces this deck to a less reliable fun time that can combo into something differently each time! Enjoy it!