Just look and revel in her majesty: 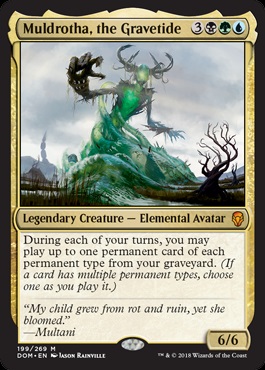 When I looked over the legendary options from Dominaria, I knew that Muldrotha would be my choice to lead my first Commander Deck, and note that it's also cheap too (2 bucks).

My Budget Commander series requires that each deck come in under the budget of the previous one, so I need a build that is under $32.94 over on coolstuffinc.com.

Muldrotha, the Maker of Happy Abes.

During each of your turns, you may play up to one permanent card of each permanent type from your graveyard. (If a card has multiple permanent types, choose one as you play it.)

So, I want to do several things here:

This is the first time I've had 3 planeswalkers in my budget build, but I emphasized them early because you can cast them again with your Commander after they inevitably die, and I am spending around $10 of my budget on them, but I think they work here marvelously.

As you can see though, to make that work I have to emphasize a lot of lesser known cards, and commons/uncommons. But that's okay, the keys I wanted to use to unlock this deck are already common, like the Font cycle, or Spellbombs, Armillary Sphere, and Evolving Wilds. See also mega cheap uncommons like Baloth Null, Rise from the Grave, and Wild-Field Scarecrow.

Note that you can cast something like Perplexing Chimera as an enchantment and then Satyr Wayfinder as your creature so you net two dorks.

This deck has a lot of great cards of various types. Let's begin with enchantments.

I knew I wanted to look at Seals and Fonts for this deck going in, and there were among the first cards I tossed in. They are cheap and highly playable.

Consider these five cards for a moment. None of them are going to make the next "Commander's Essential List" but they all work. They destroy stuff, create card advantage, or fetch lands. All of them work. And in a deck where you can play one of these five dorks every main phase from your graveyard? That's the sort of long term advantage you want. Imagine casting and sacrificing Seal of Doom every main phase? Or Seal of Primordium? Everything in here works. Now I didn't find any of the Vessel cycle to warrant including (The best was likely Vessel of Nascency), but these five are great additions to my Muldrotha deck.

And that isn't all in the enchantment section of the deck either.

This is Crop Sigil, and I want you to see just how good it is here. It helps to fill up your graveyard a little bit each turn to help your Commander have enough options to cast again. It also will get you to delirium very quickly, and then, when you need, you can sacrifice it to pull back two cards from your graveyard as a double Regrowth. We've talked about how I wanted lands and dorks that self-sacrifice, so you know it'll be loaded with goodies, right? Right!

One of my favorite tricks in this deck is Compulsion, by the way. It can self-sacrifice for a card, so it has that going for it. But it also can be used to discard a card from your hand to draw a card, and then play the discarded card. For example, imagine you just drew Crop Sigil, and now you want to cast it. Great! Discard it to Compulsion for

and draw a card. Now cast it with your leader out for

. Result? You drew a card and still cast your enchantment for the turn. That is a cool result! 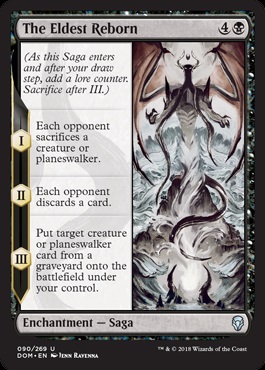 This also seems like a good shell to try out some Sagas from Commander, as they will die after being out there for a turn or three. We'll start with The Eldest Reborn, which seems pretty useful, all things considered. Casting an Edict effect, forcing discards, and reanimating something good are great, and then recurring it and using it over and over again is greater.

I also tossed in a few enchantment-triggers like Eidolon of Blossoms and Thoughtrender Lamia. You don't have to play a lot of enchantments in this deck to rack up those triggers again and again!

And those are just enchantments!

Muldrotha wins with other permanents too!

We have value in lots of other places too! Artifacts? Sure!

These are all great examples of useful and cheap cards you can collect for your Commander deck. All of them have obvious roles, such as sacrificing for a land, cards, or killing a dork. My favorite here might be Nihil Spellbomb, as replaying it over and over again will take out other graveyard shenanigans while also getting you cards.

Much like Compulsion in the enchantment section, I'm sure you noticed a powerful engine in the artifacts. Trading Post. It lets you sacrifice any artifact for a card, which can then be replayed when Muldrotha is rocking the battlefield. You can also sacrifice a dork to recast it and recur a key artifact to your hand that you may not want to cast (or you may want to cast as well. Imagine you used Nihil Spellbomb and want to recur it but you'd also like to get out Seer's Sundial back). It can also play the discard trick for four life and enable you to cast something that was in your hand. It's perfect here!

And that ain't it! Creatures?

I got your creatures!

Caustic Caterpillar is perfect here as a cheap body that can be sacrificed for a Naturalize. It's a three-mana investment to recast and sacrifice to smash something each turn. Meanwhile Thrashing Brontodon is more expensive to cast, but has a bigger body and a cheap sacrifice, so it's only 4 mana for its iteration. These are exactly the sorts of cheap commons and uncommons that make this deck hum like a pretty kitty.

And they work alongside stuff like Sakura-Tribe Elder or the Scarecrow above. But that ain't all!

I have cycling cards like Krosan Tusker and Shefet Monitor that can be cycled, get you two cards, and then cast as board threats. (see also: Scion of Darkness)You can evoke Mulldrifter for 3 mana each turn to draw two cards. (One of my final cuts from the deck was Mournwhelk as I ran out of cash. Yes, even a bulk common for cents has to respect my budget. I also had to pull Shambling Shell after I realized I had forgotten to add in a card for the budget correctly).

From ways to sacrifice creatures for effects (Stronghold Assassin; Whisper, Blood Liturgist), to cards like Stinkweed Imp we are in a good place, right? Right!

Given how fast delirium will hit here, I have the delirium craziness of the bulk mythic Mindwrack Demon. You get a 4/5 flying, trample, self -milling dork that will be unlikely to hurt yourself later. Torrent Elemental, another bulk mythic, is here just for good stuff, but it's an amazing card. I also wanted to try Multani, Yavimaya's Avatar, but was priced out. Given this deck's love of lands both in the graveyard and in play, it seems like a powerful consideration.

From lands like fetch lands to the trio of 'walkers, we have a lot of depth here. So enjoy!!!

Other ideas that were too pricey for the deck include Defense of the Heart, Dust Bowl, Strip Mine, Pernicious Deed, Oblivion Stone, Expedition Map, Mirrorpool, Traverse the Ulvenwald, Attrition, and maybe Primeval Bounty.

What did you think of my cheap take on Muldrotha? I am about three steps into my Muldrotha Happy Dance. Enjoy!

And if you liked that cheap deck, why not check out some of these older options as well?

Here are the first 30+Discount Commander Options for your wallet-friendly needs: