I hope you are having a great day today! Are you looking forward to a new "block" of three sets heading back to Ravnica? I hope so!

Today's article is inspired by Decimate.

Decimate was originally just a generic card. Then it was later recast as a Gruul style card (which it certainly is). It wasn't reprinted for Standard, but it was invested with a new Gruul feeling life.

There are a number of gold cards out there that are perfect fits for the ten guilds, but which have never been printed in that context before.

The goal of this article is to see which ten cards I'd recast in the upcoming block, and get some awesome cards in new clothes. 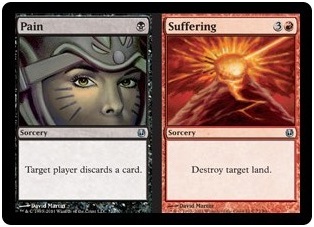 These are three multicolored cards from Invasion Block. The first, Hull Breach, is virtually impossible to flavor as Gruul. Mechanically? Sure, if you renamed it, it would work. You could rename it "Party Foul" or something, but not Hull Breach. But you couldn't reprint Hull Breach for Ravnica. (Ixalan? Breaching a ship's hull? Sure! Maybe Kaladesh.)

Vindicate on the other hand, works well. Much like Decimate above, it's got a nice generic name that is feasible. Its flavor is also such that it could easily be reprinted in Guilds of Ravnica Block with just some Orzhov watermark and art and not skip a beat. Vindicate, as an Orzhov card, would be incredibly popular! But you would never see it in Standard clothes. It can't be on this list. A three-mana card that destroys anything, including a land, isn't getting printed anew. Now, if it read, "Destroy target nonland permanent?" That's fine. Maybe even, "Choose One - Destroy target nonland permanent or target non-basic land" then sure. Maybe (Although I doubt it). But as is? Nope. That's not happening. It's too powerful.

However, Pain // Suffering is certainly something that feels Rakdos to me. It's precisely what the card and Guild both relate to. The destroy land effect is four mana, and the discard is not hot, both of which are weaker than current cards that are legal. Pain // Suffering works. So, what I am looking for are great gold cards that could get re-themed and reprinted without hurting Standard.

When Spiritmonger debuted way back when, it was incredibly powerful as a 6/6 for five mana with three abilities. It was featured in multiple shells. However, as time has ebbed, so too has the power of Spiritmonger, and it would be an appropriate time to bring it back. Spiritmonger's level of power suits the modern Standard ,and I doubt it'd have a big impact beyond being really cool. Note that Spiritmonger also feels Golgari. It plays with the cycle of life and death, as dorks die, it strengthens. That has a strong Golgari feel to me. The only thing knocking this card down is regeneration, which has mostly exited stage left. You could craft a spiritual successor that does something like remove a +1/+1 counter to tap and turn indestructible for the turn. The card matters. (see also: Terminate, a great card for Rakdos save for the "regeneration" language.)

Bounce + Discard. Counter + Life Loss. Dimir enjoys playing the long game. It loves to punish people while doing something else. The value of getting two effects is one it really enjoys. Clutch of the Undercity is a perfect example as it bounces and forces them to lose 3 life. You also have Twisted Justice which is both an Edict effect and a card drawing one. Here are some quick ones that leapt into my mind -

So, you have sheer value. Both Recoil and Undermine play into that guild's concept quite nicely. They have added value. They give you... something special that works. The flavor text on Undermine oozes Dimir. Plus, they have already printed a Recoil style ability in the color combo - so we know it's on theme!

The only reason that these are hitting back here at 10, despite obvious synergies with the guild, is that Recoil might not be "purely" reprintable anymore as a way to bounce lands. They may be happy to print a spiritual successor that just bounces a non-land and forces a discard. I'm unsure if that could be enough of a road block given that the land is replayable(as long as it wasn't discarded). Plus Undermine doesn't have that issue and is fine as is. But welcome to guild Dimir!

Meddling Mage is now, and forever will be, a strong 2-drop. In the right metagame, he can tell people to knock off their zaniest junk. He plays well in various formats and is nice to have around. I actually ran a quartet in my first, tournament-level Standard Equinaut where I ran this next to cards like Equilibrium and Fleetfoot Panther. You can check out the decklist here.

In a Standard that seeks answers to things to ensure nothing gets out of hand, Meddling Mage feels like a fair addition. It's also a card that feels very Azorius as well, so you can easily print some with that guild's watermark.

With some new art, there is no part of Cloudblazer that couldn't work on Ravnica as well as Kaladesh. The mechanics of gaining two life and drawing two cards are very similar to previous Azorius entries, such as Azorius Herald and Court Hussar. Cloudblazer offers some fun options in the same theme, and can be easily concepted as Azorius, with the ability for it to continue in Standard. You could keep reprinting it every few years for and just keep it in Standard indefinitely!

Next in my increasingly Azorius-themed countdown is Iridescent Angel. Iridescent Angel is probably one-mana too high to be really pertinent in a new Standard, so she wouldn't really dominate anything. But she's fun for casual town, and she certainly feels Azorius too me. For example...

... here's Azorius First-Wing. You'll note that it's a flying card with a strong protection ability. Protection is now rare but doable, and you could easily have a mythic rare with protection from every color. That feels mythic without really threatening anything major. Iridescent Angel for the win!

All right, time to head to another guild. For a while...

Hello Selesnya! This is Behemoth Sledge, and in a moment, we'll talk of how it's a strong fit for Selesnya in terms of flavor and mechanics. But first? This is a good card for Limited. You can target it, splash one of the colors, and such. Yet, unlike most equipment, it won't dominate or be maximally useful, due to its double color casting cost. It's a fun card to draft around, you can toss it nicely into your decks for Limited. And yet, I doubt it breaks Standard. In fact, if we have a Standard so interesting that Behemoth Sledge is a major contender, then that would be an awesome Standard!

Anyways, in terms of flavor and mechanics, this is an equipment version of Armadillo Cloak, which debuted as an awesome aura back in Invasion. This was a heavily played aura in kitchen tables for a long time, and it's still a lot of fun. Armadillo Cloak was reprinted with the modern lifelink ability as a Selesnya card in Dragon's Maze. This card was initially printed as a Selesnya card! Behemoth Sledge is similar. Plus, we already have Loxodon on Ravnica and a part of this guild.

You could easily re-art this card with the Selesnya style hammer that the Loxodon Smiter is holding! This is a perfectly reprintable card!

Gruul likes to break things, but Destructive Revelry feels, flavorfully, more like Rakdos's out -of-control parties than Gruul's. (See below for an example of that at play). But this feels right at home. It's a 2-drop with the ability to stop your stuff from being countered. Unlike other effects, this one requires mana to activate, but works on any of your spells being cast, not just creatures. When playing, leaving the right mana open means that no one counters your stuff, as they don't want to waste their mana, time, and cards. We have Goblins on Ravnica in the Gruul guild, and this fits the guild in a "Stay away from my stuff" sort of way. Some new art? This would be a fun new option for your next deck.

This card is just so evocative of Rakdos! It spells Rakdos in the name, cost, images, and everywhere else. Don't forget that Rakdos has changed over time. They became now the Circus of Death and Pain. Here are some Rakdos cards that evoke Spontaneous Combustion:

This might be an obvious choice, but it needs to happen! From its first appearance in Ravnica: City of Guilds, the Dimir Guild has been about milling folks, as the famous Glimpse the Unthinkable reminds you. Mind Funeral is arguably the second-best Glimpse sorcery ever printed. Now I wouldn't want them both in Standard at the same time, so you could give Mind Funeral it's proper Dimir Watermark and print it now, knowing that folks at the kitchen table will likely tether them together. Isn't this the perfect time for a Mind Funeral reprint for Guilds of Ravnica block? I think so!

Target player reveals their hand, you exile the choice (rather than discard) which is pretty cool. Then you exile all of the other cards they have with the same name in their graveyard, library, hand, etc. It's a powerful tool to shut down a lot of crap, it would be nice to run in Standard, and it perfectly suits the Dimir guild. Can't you just see Dimir watermarks all over this card? I can!

I think it would be incredibly cool if we found out that Kaya was actually from the Orzhov guild on Ravnica because she is such a powerful mechanical and flavorful fit! Let's look at each in turn.

We don't know too much about Kaya, save that she was an Assassin of Ghosts for hire and Marchesa hired her to assassinate Brago, King Eternal. But in a guild that loves the afterlife and ghosts as much as the Orzhov, having their own Ghost Assassin (or perhaps a handful) makes perfect sense as a way to cull back the problems or to keep the various ghosts in line.

Kaya seems like a major Orzhov opportunity in terms of valor and mechanics. Let's get her in one of these Guilds of Ravnica Block sets!

And there we go! I hope that you enjoyed this look at (around) ten multicolored cards that I'd want to recast in Guilds of Ravnica Block as entries for their respective colors' guild. Anything in here that resonated with you? Any good choices for this list that I missed?