How do you determine the best cards from a block as infamous as this one? Do you include cards banned in most formats? What about one that was banned before it was ever legal?

I'll be discussing these cards from the perspective of someone who played during this era, as well as kitchen table play including multiplayer and Commander.

All right, here we go! 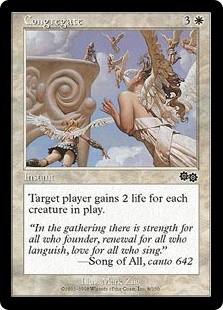 This instant was the most commonly played instant during this era at the kitchen table, particularly for multiplayer. If your only experience with multiplayer is 40 life Commander, then you might not really appreciate the power of Congregate. In Commander, you might reliably get 10 or 14 life, with the occasional 20+ life casting of it. Meh. But in your typical 20 life multiplayer, this common's ability to add 14 or 16 to your starting life total, or to potentially double it, was considerable.

This card was so heavily played, that I ran False Cure to kill someone who used it! In fact, this combo was so effective that I created a

multiplayer deck with more than 100 cards, which converted to become my first Commander deck with Oros, the Avenger leading it. A deck I still have more than a decade later!

Because of its colorless nature, no creature was played in Standard as much as Masticore was. It was great to drop, and ride to victory as you used it to mow down stuff, and attack with aplomb. It's a machine gun of might that was so dominant during its era that the card Deep Analysis jokes about it when there is a piece of a Masticore laying on the table there and it uses the flavor text, "The specimen seems to be broken," which is really using the term "broken" as very powerful, rather than non-functional. Masticore was the powerhouse of powerhouses. 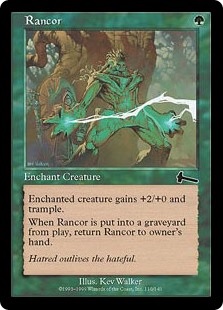 Rancor is arguably the single best Aura ever printed. I named it #6 back in my Top Ten Auras article. It was ubiquitous at casual, multiplayer, Standard and more. The ability to net +2/+0 and trample for a single Green mana while also coming back and being recast over and over again is just silly good.

Here, for comparison, are other cards from that cycle that just give bonuses to power, toughness, or a keyword.

None of these cards have a one-cost options, and none of them are as good as Rancor, even if they all cost two mana. It's just so good! The cheap cost is magnified when you are casting and recasting the card. Casting it once is one mana saved. Casting it four times over the game saves a lot more mana, so it's stronger and stronger as you keep reusing the Aura that comes back when it's enchanted soul dies.

It turns any dork into a beater, and turns any mid-range creature in a threat. It's an incredibly strong Aura, and it's now legal in Modern, by the by in case you can find a spot for it. 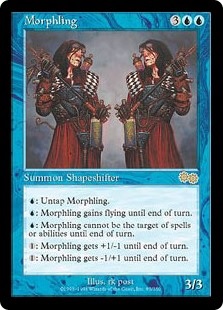 Before Urza's Saga, debates about the best creature ever printed were lively, with several options considered and discussed. Everything from Hypnotic Specter to Serra Angel were considered. And then Morphling came, and the debate ended. A resolved Morphling would win the game in any format, including Vintage. Morphling was too hard to handle, with the shroud that kept it from being killed as well as the flying, untapping, and flowing. It would be years before creatures were printed that would be good enough to drop Morphling from its throne.

Not earning from the errors of the previous Block, this block includes everything from Metalworker to Priest of Titania to Grim Monolith dominated this era. And then we also had countless ways to cheat effects out, like the cards below, Goblin Welder, Goblin Lackey, Elvish Piper, Quicksilver Amulet, Defense of the Heart, Sneak Attack, Show and Tell, and many more. All of these (save for Piper/Amulet/Defense which were too expensive and easy to stop) became major powerhouses in countless formats. Some of them are the most powerful legal cards in their format, while others were banned for their power.

Many of these cards are heavily played, or banned, at the kitchen table. Priest of Titania is arguably the most heavily played mana Elf of all time after Llanowar Elves. Meanwhile, both Rofellos and Metalworker were banned in Commander at times. These are cards with a big imprint felt all over Casual Town. 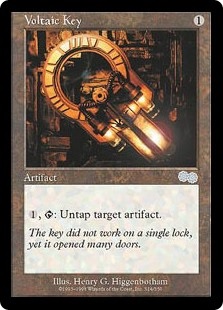 Oh, and a shout out to Voltaic Key, a 1-drop that would untap a nasty and fast rock for more mana making.

5. Tinker with a Shout Out to Academy Rector

It's just unfair to invest three mana and an already-played artifact into the nastiest option in your deck straight onto the battlefield. While it takes more work to spin, the Academy Rector is just as bad, because it's not card disadvantage or with a counter-able sacrifice effect. Tinker remains one of the most iconic cards of its type.

And what was crazy, is that we had a fair Tinker effect already in print:

I know it might have a lot of text, but it sacrifices an artifact when cast, just like Tinker, only you have to pay the difference in cost from what you sacrificed to what you fetched out. So you couldn't Transmute Artifact a one-mana artifact into a seven-mana creature without paying six mana. it was good and playable. But apparently someone looked at Transmute Artifact and thought, "That's too weak!" We have to pump that effect up!

And thus was Tinker born.

4. Time Spiral and other Untap Effects

This is a block that's all about cheating things out for no mana, or in some cases, positive mana. I can cast Snap and make

with #2 below or others running around. Combined with cards from the last Block's Top Set such as Ancient Tomb or City of Traitors, you can see how powerful these are. Time Spiral + High Tide dominated this era of the game. Free stuff is never free!

I understand the idea. If one requires it to cost twice the mana, then a fixed Necropotence that will give you the cards immediately rather than at the end of the turn makes sense. I get what this card is trying to do. I have no idea how many cards on today's list ever saw print. I can see how Bargain was conceived. Necropotence dominated in a Black Era of Standard but it was never unbeatable and decks like Armageddon, Stasis and White Weenie with its passel of Pro Black creatures could hold their own. So, a six-drop version that's cleaner and gives you the cards now may seem fair at first. I get it.

Now, having said that, just a few games with Bargain is enough to tell you that six-mana isn't enough. And in an era where six mana really means it'll get cast on turn three, it wasn't much of a restriction, and it didn't take long until it was banned in most formats. In any format where it's legal, it's amazing. I understand what they were going for, but they failed to remember this lesson for Griselbrand.

2. Tolarian Academy with Shouts Out to Gaea's Cradle and Serra's Sanctum

I don't understand how this happened. How did Tolarian Academy get through? Why wasn't it stopped? Who thought this was a printable card? It makes no sense. This triad of cards is good enough to power through with some wins that are cheaply enabled. Tolarian Academy is dumbly good.

It's like they doubled down on the poor lessons from last block. If you thought having an Ancient Tomb or City of Traitors tapping for just two mana was way too weak, well, how about Tolarian Academy then! That'll really screw folks over!

There's just nothing more to say, it's level of power is that obvious and it was the most iconic mistake in this block. 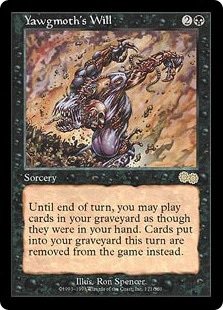 If this were a Commander-only list, I would swap this with the Bargain at the #3 and #1 spots. But otherwise, there could nothing else here other than Yawgmoth's Win. Did you cast it? Great, you win. The card quality and advantage of this is nasty as you have the ability to reuse anything in your graveyard again from Dark Rituals to removal to cheap spells and mana artifacts, it won the game. It was legal in most formats that banned the Bargain, and it led to epic game-winning plays. It just was.

And there we are! What did you think of my list? Where did I go wrong? Did I miss a card you were expecting to make the cut?

Did you enjoy our throwback list of the best cards of yore? Did you want to keep going back and check out some more fun times? Excellent! Check these out as well!